ST. JOHN'S, Dec 11, 2018 /CNW/ - Aurion Resources Ltd. (TSXV: AU) ("Aurion" or the "Company") is pleased to provide an update on drilling results at Aamurusko on its Risti Project in northern Finland. 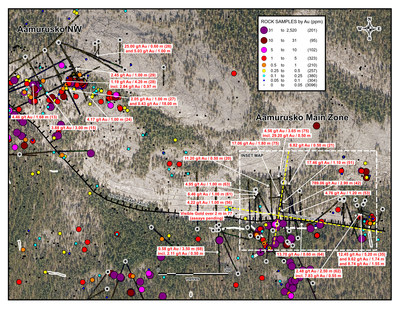 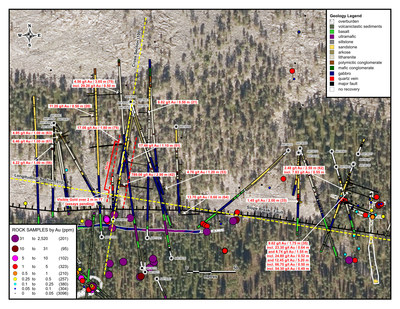 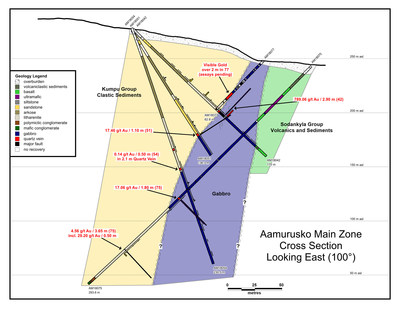 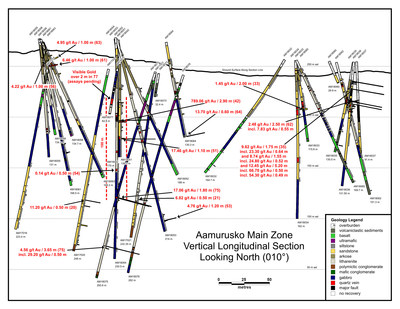 High grade mineralization predictably intersected in several drillholes may define a coherent zone/shoot comprised of at least two primary auriferous vein sets filling the space of the shoot. The shoot can also be envisioned as a zone that has a narrow horizontal dimension (strike) but with a long and steep plunge lying on the northern contact between the gabbro and the clastic sediments in an inflection (dilation zone) along the contact caused by faulting/shearing. The width and strike length of the shoot are not known at this time.

The identification of a shoot-like geometry linking intercepts in holes 77-42-51-54-75 is an exciting development as mineralized shoots tend to be vertically continuous for long distances down plunge and are expected features in orogenic gold systems.

Drilling from the south using a track mounted rig has successfully intersected high grade mineralization and can thus increase our drilling flexibility while reducing our cost in testing the Aamurusko target.

Multiple zones of gold mineralization have now been identified at Aamurusko. Three zones over >300 m strike length are currently known at the main Aamurusko target area. Mineralization was also identified >700 m to the northwest.

Drillhole AM18077 intersected an 8.2 m wide quartz vein zone (core length) at the gabbro-sediment contact approximately 25 m up plunge of AM18042. The upper 2.0 m of the vein contained 18 specks of visible gold (assays are pending).

The intercepts in drillholes AM18042, 51, 54, 75 and 77 line up along an azimuth of 010 degrees over a distance of approximately 50 m horizontally and 100 m sub-vertically along the gabbro-sediment contact. These drill intercepts may partially define a mineralized shoot with an apparent steep (70-80 degrees?) plunge to the north-northeast (approx. azimuth 010 degrees). The mineralization is open in all directions. The width of the shoot is not known at this time.

A total of 64 drillholes testing multiple target areas were completed since July 2018 for total meterage of approximately 10,000 m. Assays are pending for 9 drillholes at Aamurusko.

"The predicted auriferous vein intercepts in drillholes 75 and 77 have greatly enhanced our understanding of the structural controls at Aamurusko. The discovery of gold mineralization in trenching and drill core in multiple targets over a distance of more than 8 km suggests the mineralizing system at Aamurusko and Risti in general may have considerable scale. Almost every drillhole to date at Risti has encountered some gold mineralization, supporting this. Moreover, we have encountered gold mineralization in multiple host rocks including clastic sediments north of the gabbro contact, the gabbro itself and volcanics to the south. Both gabbro contacts host high grade shear hosted vein mineralization and with the intercept in AM18068 there is potential for the discovery of other veins through the >1.4 km long high grade boulder field," commented Mike Basha, President and CEO. "Furthermore, there are many targets over >15 km of strike across Risti currently being developed for drill testing. Aurion is well funded to advance the Aamurusko discovery and the Risti Project into the foreseeable future."

All samples were delivered to ALS Minerals preparation facility in Sodankyla, Finland where sample preparation work was completed. All analytical work was completed at ALS Minerals facility in Loughrea, Ireland. ALS Minerals is an internationally accredited lab and are ISO compliant (ISO 9001:2008, ISO/IEC 17025:2005). All samples were analyzed for gold using the Au-AA26 procedure (50g fire assay with AAS finish: Lower Detection Limit 0.01 g/t gold; Upper Limit – 100 g/t gold). Any samples that returned overlimit values (>90.0 g/t gold) or had visual indication of mineralization, such as visible gold or prospective vein intervals (>90.0 g/t gold) were analyzed by Au-SCR24 1kg, Screen Fire Assay Au (0.05-1,000 ppm) by 1kg screen fire assay (50g nominal sample weight). The sample pulp (1kg) is passed through a 100 micron stainless steel screen. Any material remaining on the screen (>100 micron) is retained and analyzed in its entirety by fire assay with gravimetric finish and reported as the Au (+) fraction. The material passing through the screen (<100 micron) is homogenized and two sub-samples are analyzed by fire assay with AAS finish. The average of the two AAS results is taken and reported as the Au (-) fraction result. All three values are used in calculating the combined gold content of the plus and minus fractions. The gold values for both the (+) 100 and (-) 100 micron fractions are reported together with the weight of each fraction as well as the calculated total gold content of the sample.)  Multi-element analysis (ME-ICP61, four-acid digestion, 35 element ICP-AES) was completed on all samples. Certified standards and blanks were inserted every 30 samples. ALS has its own QA/QC protocol using standards, blanks and duplicates.

For further information: Mike Basha, P.Eng., P.Geo., President and CEO of Aurion, a Qualified Person as defined by National Instrument 43-101, is responsible for the preparation of this release. For more information on these projects please visit our website at www.aurionresources.com.