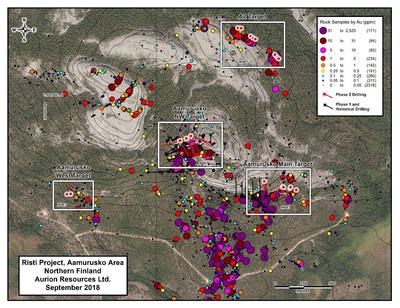 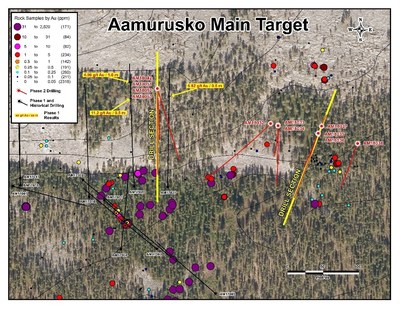 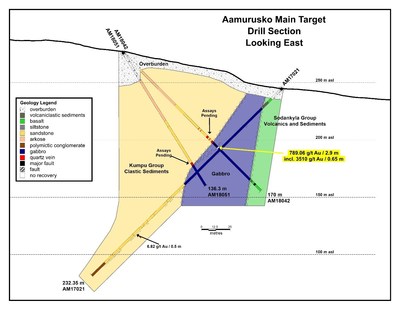 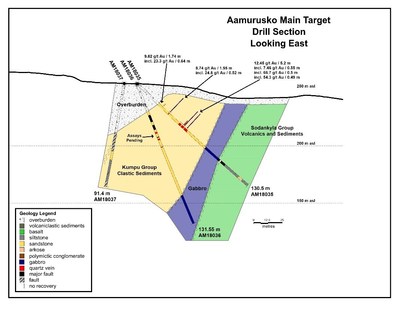 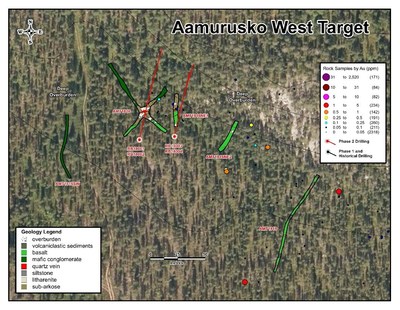 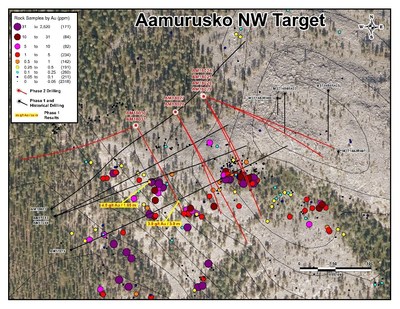 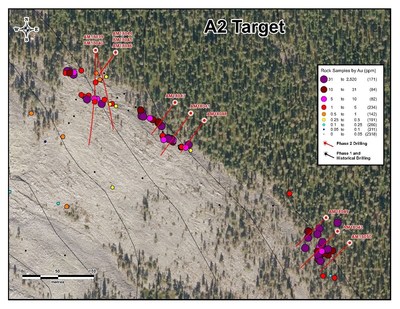 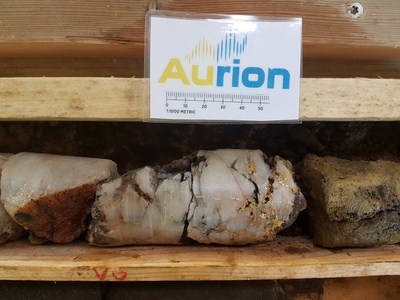 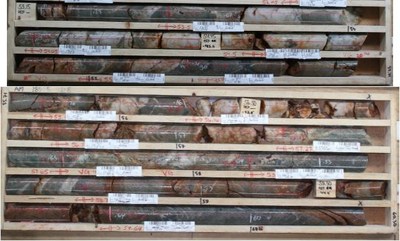 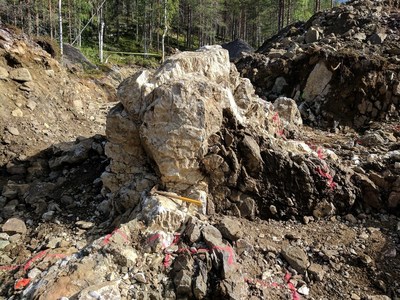 A total of approximately 5,239 metres (m) in 35 drillholes have been completed since early July. Partial assays have been received for 17 drillholes to date.  Four targets have been tested including Aamurusko Main, Aamurusko West, Aamurusko NW and A2.

Diamond drilling with two drills continues at Aamurusko. A summary of assay results received to date are presented in a table and further discussed below.  Maps, sections and photos can be found on Aurion's website by clicking the following link, https://aurionresources.com/site/assets/files/1252/nr190918figures.pdf.

Beginning at the eastern extent of the main boulder field, and moving westward, 11 drillholes on north to south fences spaced 25 to 50 m apart were completed to date.

All widths are core widths and may not represent true widths.  Assay values are uncut.

Four drillholes on two fences, approximately 30 m apart, were completed at a new discovery approximately 1.9 km west of the eastern extent of the main Aamurusko boulder field.  Mechanical trenching of a cluster of auriferous boulders discovered in 2017 exposed multiple quartz veins up to 1.5 m wide accompanied by strong iron carbonate alteration.  This east-west trending, steeply north dipping quartz vein zone was traced in trenching for approximately 40 m before going under cover.  Assays are pending from the channel sampling and drilling.  The mineralization is located at the sheared contact between polymictic conglomerate, quartzite and mafic volcanics.

Eight drillholes on five fences were completed over a distance of 185 m approximately 800 m west-northwest of the eastern extent of the main Aamurusko boulder field.  Assays have been received from all holes.  The best assay results came from drillhole AM18026 which returned of 25.00 g/t Au over 0.6 m and 5.03 g/t Au over 1.00 m.  All drillholes intersected quartz veining with anomalous gold values.  Mineralization is hosted by quartz veins in clastic sediments and gabbro.

Eleven drillholes were completed over a strike of 450 m approximately 1.2 to 1.4 km north-northwest of Aamurusko.  Three target areas were tested.  Partial assays have been received for 4 of 12 drillholes.  The best assay result to date was 22.00 g/t Au over 0.45 m from 38.45 to 38.90 m downhole from AM18041.  Mineralization is hosted by clastic sediments.

The discovery of significant quartz veining in bedrock through trenching and drilling immediately up-ice confirms Aurion's original premise that the boulders were not transported significant distances.  Furthermore, the identification of gold mineralization associated with a major east-west trending north dipping structure immediately north of the main Aamurusko boulder field is a major breakthrough as this structure is concealed under talus and overburden along a sharp break in slope. Hundreds of gold bearing boulders were discovered proximal to the break in slope which Aurion modelled as a major structure and lithological contact.  The presence of veining in drilling and trenching similar to the high grade boulders on surface exhibiting "crack and seal" textures suggests this shear zone is likely the controlling structure and/or source of many of the large, auriferous boulders within the main 1.1 km by 1.4 km Aamurusko boulder field.

The discovery of significant quartz veining in drilling 1.9 km apart and open in both directions suggests significant strike length potential.  The discovery of high grade gold mineralization associated with both fault fill veins and extensional veining also indicates multiple gold enriching events.  Additionally, the discovery of auriferous gold mineralization in drill core in multiple targets over a wide area (1.5 km by 2.0 km) suggests the mineralizing system at Aamurusko could have considerable scale.

Drilling at Aamurusko has been underway since early July and continues with two drills. Initial plans include completing 15,000 m.  Trenching with two excavators continues throughout the property as well.

Structural and lithological mapping is being conducted in conjunction with a detailed UAV magnetic survey and together with drill core data will be compiled into a 3D geological model.

Prospecting with a team of 6 prospectors continues to add significant value.  Only 25% of the 15,000 ha Risti property has been systematically prospected.

"Blind, structurally complex orogenic gold deposits are challenging, however, our work this field season especially discovering high grade gold mineralization in drilling has advanced our understanding of the controls on mineralization significantly", commented Mike Basha, President and CEO.  "With approximately C$16 million cash in our treasury we are well funded to advance the Aamurusko discovery and the Risti Project into the foreseeable future.  This is a very exciting time for Aurion and its shareholders".

All samples were delivered to ALS Minerals preparation facility in Sodankyla, Finland where sample preparation work was completed. All analytical work was completed at ALS Minerals facility in Loughrea, Ireland.  ALS Minerals is an internationally accredited lab and are ISO compliant (ISO 9001:2008, ISO/IEC 17025:2005).  All samples were analyzed for gold using the Au-AA26 procedure (50g fire assay with AAS finish: Lower Detection Limit 0.01 g/t gold; Upper Limit – 100 g/t gold).  Any samples that returned overlimit values (>90.0 g/t gold) or had visual indication of mineralization, such as visible gold or prospective vein intervals (>90.0 g/t gold) were analyzed by Au-SCR24 1kg, Screen Fire Assay Au (0.05-1,000 ppm) by 1kg screen fire assay (50g nominal sample weight). The sample pulp (1kg) is passed through a 100 micron stainless steel screen. Any material remaining on the screen (>100 micron) is retained and analyzed in its entirety by fire assay with gravimetric finish and reported as the Au (+) fraction. The material passing through the screen (<100 micron) is homogenized and two sub-samples are analyzed by fire assay with AAS finish. The average of the two AAS results is taken and reported as the Au (-) fraction result. All three values are used in calculating the combined gold content of the plus and minus fractions. The gold values for both the (+) 100 and (-) 100 micron fractions are reported together with the weight of each fraction as well as the calculated total gold content of the sample.)  Multi-element analysis (ME-ICP61, four-acid digestion, 35 element ICP-AES) was completed on all samples. Certified standards and blanks were inserted every 30 samples.  ALS has its own QA/QC protocol using standards, blanks and duplicates.

Mike Basha, P.Eng., P.Geo., President and CEO of Aurion, a Qualified Person as defined by National Instrument 43-101, is responsible for the preparation of this release.  For more information on these projects please visit our website at www.aurionresources.com.