ST. JOHN'S, Dec 17, 2018 /CNW/ - Aurion Resources Ltd. (TSXV: AU) ("Aurion" or the "Company") is pleased to provide an update on trenching results at its Risti Project in northern Finland. 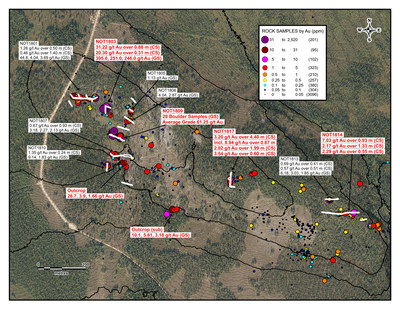 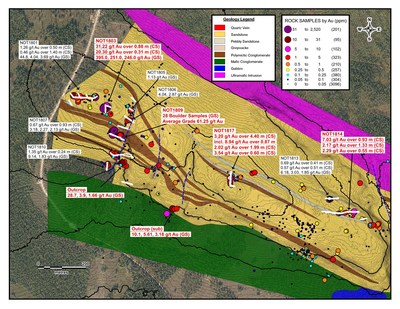 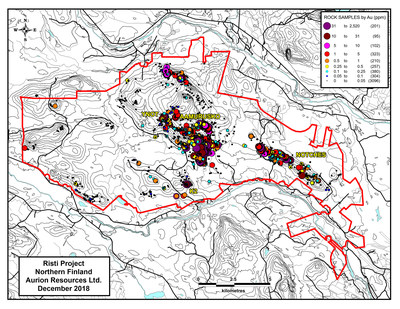 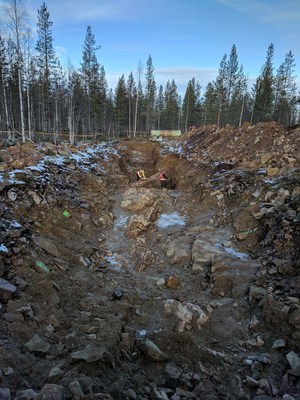 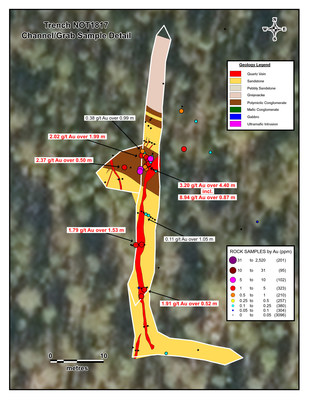 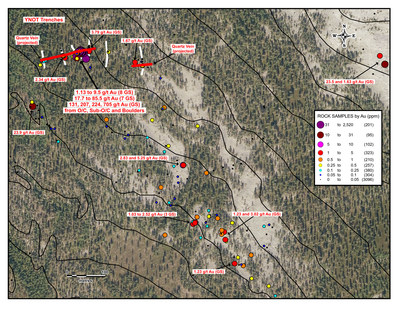 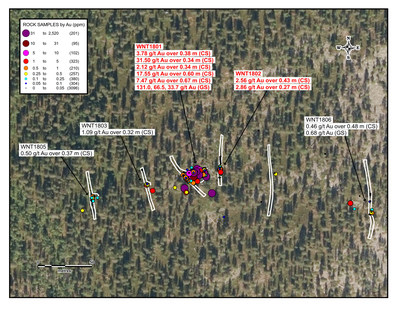 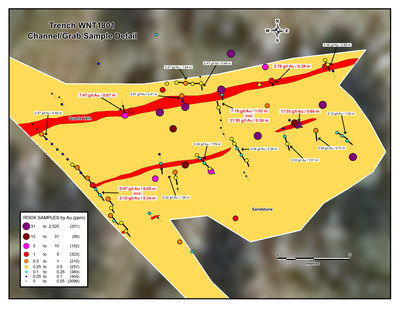 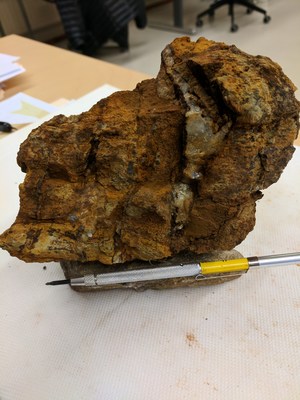 The Notches prospect covers an area of 5 km by 1 km and begins approximately 3 km east-southeast of Aamurusko. Seventeen individual trenches were excavated, washed, mapped and saw-cut channel sampled in three separate areas within an area of approximately 1,900 m by 400 m. High grade gold was encountered in quartz veins and brecciated sediments in several trenches while following up on high grade boulders. Mineralization is preferentially hosted by the more competent sandstones which are moderate to highly iron carbonate-sericite and silica altered.

A new style of gold mineralization, previously undocumented on the Risti project, has been discovered at Notches.  A single trench (# 17) dug in the central part of the trenched area, targeting mineralized quartz boulders assaying up to 3.5 g/t Au encountered a pervasively altered and mineralized 5-15 m wide polymictic conglomerate bed cut by a quartz vein stockwork and veins up to 1.4 m wide.  The conglomerate hosts pervasive silica-sulfide alteration and mineralization with 1 to 15% sulfides (pyrrhotite-pyrite-chalcopyrite-galena) plus magnetite, tourmaline and rare visible gold.  This trench was dug in a north-south orientation (which was the last trench dug due to the onset of winter weather) only exposed a small portion of the mineralized conglomerate. The conglomerate has been mapped over 300 m along strike and has a coincident weak to moderately high magnetic signature due to the presence of magnetite and pyrrhotite. The best assay from the polymictic conglomerate was 3.2 g/t Au over 4.40 m including 8.94 g/t Au over 0.87 m.  The best channel sample from the vein was 3.54 g/t Au over 0.6 m.

In the western portion of the Notches, eleven trenches were excavated over an area of approximately 300 m by 350 m.  The best channel sample result was from Trench 3 which returned 109.50 g/t over 0.25 m from a north-south trending quartz vein.  Another channel sample from this trench assayed 20.30 g/t Au over 0.31 m from altered sandstone with narrow quartz stringers.

Trench 9 was excavated approximately 100 m south-southeast of Trench 3.  Twenty eight (28) angular quartz boulders were pulled from the trench.  They assayed from nil to 386.00 g/t Au and an average of 61.25 g/t Au.  Numerous quartz veins were exposed in bedrock in the trench however the best channel sample was 0.61 g/t Au over 0.41 m.  It is presumed that the source of these boulders is up ice to the west-northwest of the trench.

Approximately 500 m to the east-southeast three more trenches were excavated.  The best results were from Trench 14 from north-south trending quartz vein breccias assayed 7.03 g/t Au over 0.93 m and 9.83 g/t Au over 0.46 m. Mineralization comprises quartz vein arrays and breccias with variable amounts of pyrite-chalcopyrite-galena and locally coarse visible gold hosted by an interbedded sequence of sandstones and conglomerates.  The onset of winter weather terminated the trenching program. Many more targets remain to be trenched.

Approximately 3.5 km west-northwest of Aamurusko, six trenches were excavated, washed, mapped and saw-cut channel sampled over a west-east distance of 260 m.  This trenching was following up high grade boulders on surface. An east-west quartz vein system hosted by moderate to strong iron carbonate alteration up to 10 m wide was identified in 5 of 6 trenches.

The next best channel sample came from trench 2 assaying 2.86 g/t Au over 0.27 m and 2.56 g/t Au over 0.43 m.  The remaining trenches returned only anomalous values. High grade boulders have been sampled to east, southeast and southwest.  They represent targets for follow-up trenching in 2019.

Over 4,950 rock samples collected across Risti to date averaging 8.23 g/t Au and 1,487 rock samples collected at the Notches to date averaging 3.60 g/t Au. Several new targets have been identified for further follow-up.  At Risti Northwest, approximately 8 km north-northwest of Aamurusko, 61 quartz boulders collected over a distance of 1.7 km assayed from nil to 108.5 g/t Au.    Only 30-35% of the 15,000 ha Risti property has been systematically prospected.

"Trenching has proven to very effective in following up surface boulder discoveries across the Risti project.  It also demonstrates that the thickness of overburden cover is relatively shallow in many parts of the property. More importantly, exposing bedrock mineralization proximal or in some cases immediately below the boulders indicates the amount of glacial dispersion is minimal.  The discovery of gold mineralization in trenching and drill core in multiple targets over a distance of more than 8 km suggests the mineralizing system at Aamurusko and Risti in general may have considerable scale.   Moreover, encountering a new style of gold mineralization in the conglomerates presents a new target throughout the whole Risti project.", commented Mike Basha, President and CEO.  "There are many targets that will require follow-up in 2019.  Aurion is well funded to advance the Aamurusko discovery and the Risti Project into the foreseeable future".

All samples were delivered to ALS Minerals preparation facility in Sodankyla, Finland where sample preparation work was completed. All analytical work was completed at ALS Minerals facility in Loughrea, Ireland.  ALS Minerals is an internationally accredited lab and are ISO compliant (ISO 9001:2008, ISO/IEC 17025:2005).  All samples were analyzed for gold using the Au-AA26 procedure (50g fire assay with AAS finish: Lower Detection Limit 0.01 g/t gold; Upper Limit – 100 g/t gold).  Any samples that returned overlimit values (>90.0 g/t gold) or had visual indication of mineralization, such as visible gold or prospective vein intervals (>90.0 g/t gold) were analyzed by Au-SCR24 1kg, Screen Fire Assay Au (0.05-1,000 ppm) by 1kg screen fire assay (50g nominal sample weight). The sample pulp (1kg) is passed through a 100 micron stainless steel screen. Any material remaining on the screen (>100 micron) is retained and analyzed in its entirety by fire assay with gravimetric finish and reported as the Au (+) fraction. The material passing through the screen (<100 micron) is homogenized and two sub-samples are analyzed by fire assay with AAS finish. The average of the two AAS results is taken and reported as the Au (-) fraction result. All three values are used in calculating the combined gold content of the plus and minus fractions. The gold values for both the (+) 100 and (-) 100 micron fractions are reported together with the weight of each fraction as well as the calculated total gold content of the sample.)  Multi-element analysis (ME-ICP61, four-acid digestion, 35 element ICP-AES) was completed on all samples. Certified standards and blanks were inserted every 30 samples.  ALS has its own QA/QC protocol using standards, blanks and duplicates.

For more information on these projects please visit our website at www.aurionresources.com.

For further information: Mike Basha, P.Eng., P.Geo., President and CEO of Aurion, a Qualified Person as defined by National Instrument 43-101, is responsible for the preparation of this release.