TORONTO, Oct. 16, 2020 /CNW/ - 11882716 Canada Inc. today announced that it has discovered that an inspection team of the State Council determined that natural gas prices for non-residential users were not reduced in Sanya as required pursuant to price reduction policies, according to an excerpt from an article published on the Government of China's Central Government website on November 11, 2019 (the "State Council Article", attached in its original form as Appendix A, with an unofficial partial English translation attached as Appendix A-1). 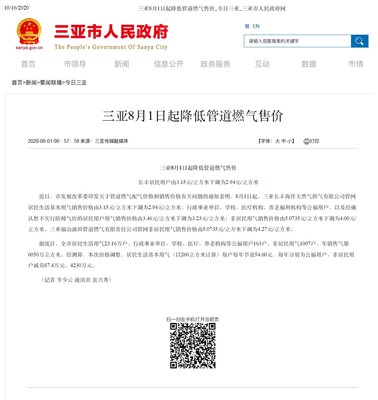 Given that CF Energy Corp. ("CF Energy" or the "Company") is the sole natural gas operator in Sanya according to the Company's website, it follows then that the determination by the State Council's inspection team is indeed a determination that CF Energy failed to comply with the Central Government's mandated price reduction policies. Or in other words, it appears the Company disobeyed a directive of the Central Government.

The evidence above raises serious questions about whether the Company has met its obligation to make timely disclosure of material facts to shareholders.

Further, in yet another apparent failure to inform shareholders of material developments, it appears that CF Energy has not disclosed the significant impact that recently imposed price regulations can be expected to have on the Company. The Company issued a press release on July 23, 2020 announcing that the Sanya City Development and Reform Commission (the "SYDRC") had finalized the city's natural gas utility pricing formula adjustment (the "Pricing Formula"), which would be the guideline for the Company and its subsidiaries to follow on its gas selling prices starting from August 1, 2020.

According to an article published in the Official Website of The People's Government of Sanya City on August 1st, 2020 (attached in its original form as Appendix B, with an unofficial English translation attached as Appendix B-2), the Pricing Formula imposed by the SYDRC required Sanya Changfeng Offshore Natural Gas Distribution Co., Ltd., a wholly owned subsidiary of CF Energy that distributes natural gas in Sanya according to the Company's public disclosure, to decrease the selling price of its natural gas for non-residential customers from RMB 5.0735 to RMB 4.00 per cubic metre – a price decrease of RMB 1.0734 per cubic metre. According to CF Energy's Management Discussion & Analysis for the year ended December 31, 2019, the annual volume of gas sold to commercial customers in Sanya City in 2019 was 36,609,086 cubic metres. On the basis of the foregoing, a price decrease of 1.0734 per cubic metre would therefore be expected to decrease revenue by more than RMB 39 million for years to come. Despite these figures being available to the Board, the Company appears to have, yet again, failed in its duty to shareholders to identify the significance and materiality of these matters, only stating that the Pricing Formula would "negatively impact" the Company's gross profit.

Except for the historical information contained herein, the matters addressed in these materials are forward looking statements that involve certain risks and uncertainties. You should be aware that actual results could differ materially from those contained in the forward-looking statements. 11882716 Canada Inc. does not assume any obligation to update the forward-looking information.

Appendix A – Original Version of the State Council Article

Appendix A-1 – Unofficial English Translation of the State Council Article

TITLE: Circular on the typical problems of some localities and corporates failing to implement the tax reduction and fee reduction policies found in the sixth general supervision of the State Council of the People's Republic of China

3、 Natural gas price adjustment in some areas of Hainan Province hasn't been put in place in a timely manner. The 10th supervision and inspection group of the State Council in Hainan Province found that from 2017 to 2019, the value-added tax rate of natural gas was reduced from 13% to 9% after three times of reduction.

However, for the non-residential gas consumption of pipeline gas in Hainan Province which consists of 19 counties and cities, except for the price in Haikou where it was reduced twice, it is observed that in Sanya City, Dongfang City and Chengmai County, the price was seen to be reduced once (by 1 cent, 5 cents and 1 point per cubic meter respectively), and there were no price that were lowered amongst the other cities and counties.

Sanya will reduce the price of pipeline gas from August 1.

According to statistics, there are 231,600 living units of the city's residents that use domestic gas, 163 public welfare users such as administrative institutions, schools, medical care and pension institutions, and 1007 non-residents users, with an annual sales volume of 60.5 million cubic meters. It is estimated that this price adjustment will save 54.60 yuan per household for basic gas consumption (based on 260 cubic meters), which will reduce the burden of public welfare users and non-residents by 874000 yuan and 42.3 million yuan respectively.