VANCOUVER, Nov. 5, 2019 /CNW/ - One year into the legalization of recreational cannabis in Canada, the province of Alberta has taken a clear lead in its efforts to develop the private cannabis retail market. With 317 licenses issued by the Alberta Gaming and Liquor Commission (AGLC), the province now has 283 private cannabis stores open for business, accounting for 57% of the stores in Canada. 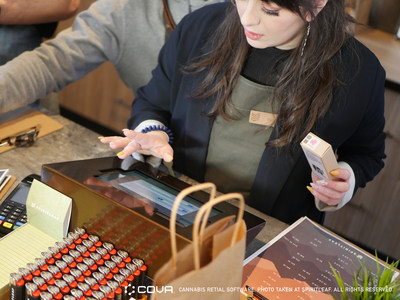 About half of all those stores, 52%, operate using Cova Software. The Vancouver-based Point-of-Sale (POS) company is the clear retail tech of choice in Alberta. Built specifically for cannabis retail compliance, the software is equally popular among independent stores and multi-location retailers, including Aylmer Nelson Cannabis, Spiritleaf, Fire & Flower, Choom, and Prairie Records.

"We spent a year looking at POS systems before we launched," said Darren Bondar, President & CEO of Inner Spirit Holdings (CSE: ISH), the company behind the Spiritleaf network of stores. "We needed a system that was reliable, fast and easy to use. We also needed a POS partner who could scale with us, keep up with regulations, and provide industry-leading analytics and service. At first it appeared like there were a lot of options, but as we dug deeper, Cova was the clear winner for Spiritleaf. We remain satisfied clients twelve months and 37 stores later."

Cova Software has been available to Canadian retailers since the beginning of legalization. Tailor made for the cannabis industry, the POS automates compliance with features like a built-in ID scanner and purchase limit alerts. These safeguards reduce human error, prevent sales to minors, and diversion of product to the black market. The system generates provincial reports required by agencies like the AGLC, saving retailers hours of compiling manual reports.

"We're really proud to be the POS-of-choice in the province," said Gary Cohen, CEO of Cova. "Alberta's charge into the recreational cannabis market has really inspired and challenged us to make a better and better product. We took a compliance-first approach and put a lot of effort into staying on top of evolving regulations and reporting, so retailers could focus on running their stores. It's great that Alberta cannabis retailers have been on that page too. We're very thankful that Alberta's leadership into recreational cannabis allowed so many of those retailers to make strides."

Alberta's private retail model and decision not to cap the number of retail licenses has led to the country's most developed cannabis market and created a lot of opportunity—and competition—for enterprise and independent retailers.

"As an independent operator in Canada's most competitive cannabis market, there is no space for a small business mindset," said Mack Andrews, Co-Owner of Aylmer Nelson Cannabis, one of the top independent stores in Calgary. "We needed a POS system that had enterprise-level functionality and allowed us to effectively manage our inventory, track key metrics, and streamline workflows. It did not take long to understand that working with Cova was the right answer, and they have acted more as a partner than simply just a vendor."

"Earning over 50% market share is a proud accomplishment for Cova," said Cohen. "With that comes a lot of experience and knowledge. We like to share the best practices we learn with new cannabis retailers, to help them avoid mistakes. When we set our customers up, we want to set them up for success."

ABOUT COVA:Cova is an award-winning POS and Inventory Management solution designed to streamline cannabis retail. A compliance-first company, Cova not only meets all system requirements in every market served, but constantly adapts to changing rules and regulations to make compliance simple for owners and employees, reducing the risk of infractions and fines. In addition to automated compliance features, Cova offers an intuitive, user-friendly design and lightning-fast transaction time. Its technology platform currently powers more than 500 cannabis stores of all sizes with virtually no downtime, even on 4/20, making it the most robust and reliable cannabis POS system available. Headquartered in Vancouver, BC, and Denver, CO, Cova's team spans North America, including BC, Alberta, Saskatchewan, Manitoba, Ontario. Learn more at www.covasoftware.com.