Wuliangye is also the designated liquor of the event held by the China Cultural Center in Paris under China's Ministry of Culture and Tourism, serving as a media of international cultural exchanges. 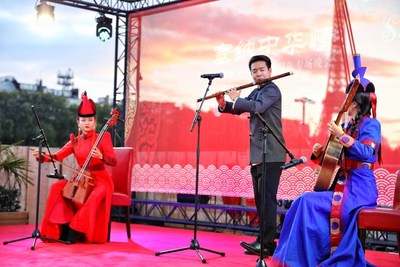 Wuliangye won the praise of guests from home and abroad for the unique taste and profound culture of its liquor.

Different from the soft taste of French champagne, Wuliangye liquor boasts a stronger and mellower taste, said Martine Partrat, an executive from Air France, after tasting the Chinese liquor at the event scene.

Wuliangye plays an important role in promoting the Chinese culture, as the liquor is bred in Yibin, a city in southwest China's Sichuan Province which is defined as "the most suitable region for the production of high-quality pure distilled liquor at the same latitude of the Earth" by the United Nations Educational, Scientific and Cultural Organization (UNESCO) and the Food and Agriculture Organization of the United Nations (FAO) for its unique and unduplicated natural environment.

The event featured Chinese minority songs and dances, a dress show as well as Chinese food and wine, with the attendance of more than 150 guests including Chinese and French officials and those from economic, cultural, media and other fields of the two countries.

Holding such a gala is helpful for French people to know China in an all-round way through art performances, photo exhibitions, fashion shows and food tasting, said Yan Zhenquan, director with the China Cultural Center in Paris.