VANCOUVER, June 4, 2018 /CNW/ - On June 16th, White Spot celebrates 90 years of serving up delicious meals and creating special memories for everyone who comes through their doors. From the humble beginnings of serving peanuts and hotdogs out of Nat Bailey's Model T Ford in 1928, to proudly serving over 12 million guests a year with 65 restaurants throughout BC and Alberta, White Spot is Canada's longest running restaurant chain and truly BC's Own restaurant. 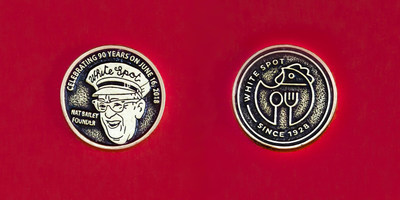 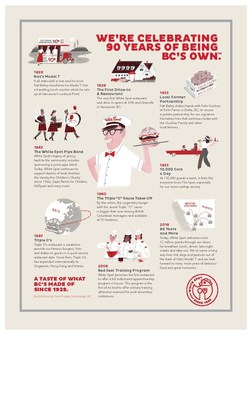 "People often ask me how White Spot continues to grow and remain relevant after all these years," says Warren Erhart, President of White Spot. "I tell them it's because memories are made here. Whether you're here for Sunday brunch, a first date, a special birthday or your very first Pirate Pak, we have something on the menu for every occasion. On behalf of all our people, I'd like to thank our long-time guests for their support and invite newcomers to see what's made us BC's Own restaurant for all these years."

To honour White Spot's culinary history, Executive Chef Danny Markowicz and his team have put a new spin on an old classic: Chicken in the Straw. Featured on their limited-time 90th anniversary menu, Chicken in the Straw – which consists of a crispy quarter chicken served with creamy coleslaw on a "nest" of signature Kennebec fries – is almost as Legendary as the famous Triple "O" sauce.

"Many people automatically think of us as being famous for our burgers and Triple "O" sauce," says Markowicz. "But the truth is White Spot began as a BBQ chicken restaurant, and was made popular with dishes such as the BBQ'd Chicken Sandwich and Chicken in the Straw. It's amazing how many guests still ask for these dishes, and the version we have created for our 90th anniversary menu is sure to bring back great memories."

The modern twist on an old classic, along with other 90th anniversary menu items, will be available from June 4th to July 15th.

In addition to the anniversary menu, and as a way to say thank you to their guests, visitors to any White Spot location on June 16th will receive (while supplies last) one of 50,000 limited edition commemorative coins. White Spot will also be recognized for this momentous milestone through the City of Vancouver proclaiming June 16th 'White Spot 90th Anniversary Day' to officially recognize the restaurant's ongoing success and community contributions.

Headquartered in Vancouver, British Columbia, White Spot is Canada's longest-running restaurant chain, celebrating their 90th year. Founded in 1928, when Nat Bailey launched Canada's first drive-in restaurant at Granville and 67th, the 90-year-young chain now sees more than 17 million guests annually at 133 White Spot and Triple O's locations throughout B.C., Alberta and Asia. Bailey's original vision was to build a restaurant that served the highest quality, unique tasting food and White Spot remains committed to continuing this tradition in each and every meal. White Spot Limited is proud to be recognized with the platinum status designation as one of Canada's Best Managed Companies and one of Canada's top 150 iconic brands as awarded by Interbrand Canada, and a member of Forbes list of Top Employers of Canada.