TORONTO, Nov. 21, 2017 /CNW/ - This month, Starlight Children's Foundation Canada is launching an upbeat social media fundraising campaign, aimed at expanding their wildly popular Ward + Robes program, a unique line of designer hospital gowns to help teens feel more like themselves while undergoing treatment. The 'Sick Can't Stop My Sparkle' campaign is a collection of online multimedia highlighting five seriously ill teens describing the importance of strength and individuality while dealing with illness. The campaign shows participants both in and out of Ward + Robes gowns with select personal items that have helped them cope and maintain strength through the course of their care journey. Through the remainder of 2017, Starlight Canada will be unveiling new teen multimedia stories weekly on Facebook, Instagram, Twitter and YouTube, and are challenging the public to #Dare2Share content with three of their friends and followers, along with making a donation to the Ward + Robes program through GoFundMe. 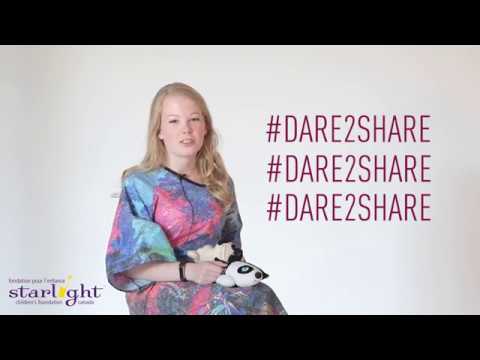 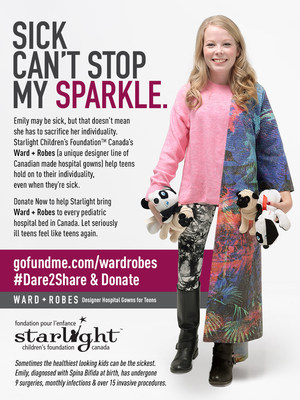 Last year, Starlight began offering Ward + Robes to the Children's Hospital of Eastern Ontario in partnership with Rethink Canada. Soon after launching, Canadian and International media took notice with over 10 million views of the campaign video and interviews from around the world including Japan, Brazil, Germany, Australia, United States and the United Kingdom. The Ward + Robes gowns, designed by Toronto fashion house Nuvango, are 100% Canadian made, with fabric that exceeds hospital grade standards. Design features include pockets for monitors, four ties for full back coverage and access areas for IVs and ports.

With 'Sick Can't Stop My Sparkle' as a follow up to the viral success of last year's campaign, Starlight aims to raise enough funds to expand the program to all dedicated pediatric hospital beds in Canada. Each increment of $100 in donations will supply one gown for a seriously ill teen.

To watch a 60-second video of Emily's story, visit: https://youtu.be/blC0NB0WHVc

"I am always amazed at the courage and strength of Starlight kids going through difficult times. They're often the most upbeat and positive people, as is evident from the 'Sick Can't Stop My Sparkle' campaign," says Starlight Children's Foundation executive director, Brian Bringolf. "However, it's important to remember that sometimes the healthiest looking children can be the sickest, and the teenage years are tough enough, even if you're in good health. The peer pressure, bullying and expectations put on youth today take a massive toll on both physical and mental well-being. The Ward + Robes program allows hospitalized kids to feel like they have their identity back through something as simple as a cool hospital gown. These teens are brave enough to 'dare to share' their story, and it's therapeutic for them. We are challenging the public to "dare to share' these stories with three of their friends and family through social media, and make a donation to this important program."

Each week leading up to December 31, 2017, Starlight Canada will unveil a new Starlight teen's journey on their social media streams. To help Starlight achieve their fundraising goals, the charity is asking for supporters to donate in any denomination at their GoFundMe page, and share each teen's story with three of their friends and family as they are revealed weekly on their Facebook, Twitter, YouTube and Instagram feeds, using the hashtag #Dare2Share.

Starlight Children's Foundation™ Canada is part of Starlight's global network, serving seriously ill children and their families through partnerships with more than 160 healthcare facilities. Over the past 25 years, Starlight has become a leading global charity that partners with experts to improve the life and health of kids and families around the world. Collaborating with innovators in pediatric healthcare, entertainment and technology, Starlight provides a unique blend of family-centered programs and services from hospital to home.