TORONTO, March 10, 2020 /CNW/ - Scotiabank CONTACT Photography Festival, the esteemed annual presentation of lens-based art, today announced its curated program of public installations for the 24th edition of the city-wide event. Throughout the month of May, 2020, a number of Public Installations will address artists' roles in building awareness, stimulating dialogue, and fostering engagement concerning a range of environmental issues. Other installations feature artists exploring the interconnectedness and implications of body, identity, site, and history. 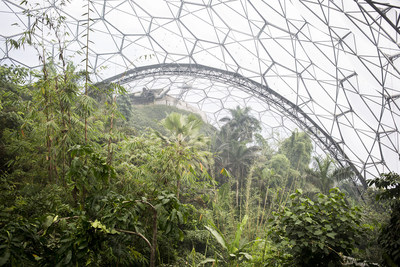 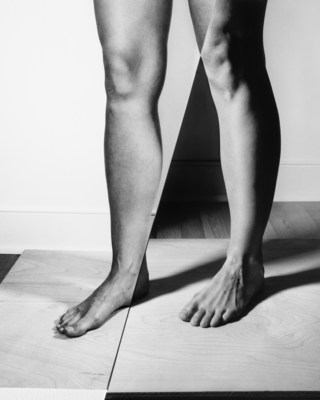 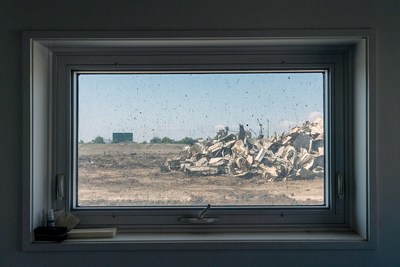 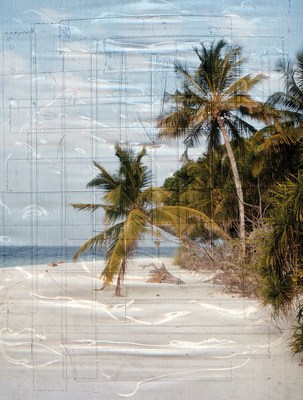 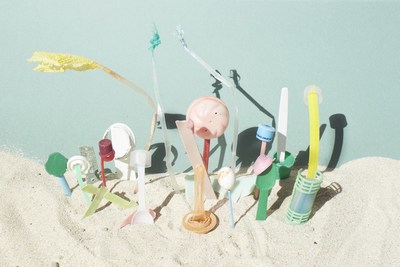 CONTACT Executive Director Darcy Killeen said, "CONTACT's Public Installation program began in 2003, with four venues in the city and now includes numerous sites in the city plus a series of billboard installations across the country supported by Scotiabank, Pattison Outdoor Advertising, and Nikon Canada. Whereas CONTACT's annual event is highly anticipated by the international photography community, the public installations are accessible to residents and visitors for both intentional and unexpected encounters. The CONTACT team gratefully acknowledges the support of our partners who make it possible for us to connect the viewing public with the work of so many outstanding artists."

Greg Staats, for at least one day, you should continue to breathe clearly, Todmorden Mills Heritage Site

With an installation that incorporates photographic and pictographic enlargements adhered to the surfaces of Todmorden's restored paper mill, Six Nations Hodinǫhsǫ:ni, Toronto-based artist Greg Staats reasserts First Nations' presence on this site in an act of reconciliation, though it arrives and derives from a double displacement. First came the original displacement of the Hodinǫhsǫ:ni from the Mohawk Valley in upper New York state to the Grand River; then came a forced displacement from which many of the other colonial disinheritances derive—of the deprivation of language, culture, and governance. Staats's restorative aesthetic redresses these losses. He utilizes a mnemonic of place (Six Nations of the Grand River Territory) and the knowledge that resides in the Mohawk language and the Great Law of Peace to shape a narrative of transformation and renewal that circulates us around the building. Curated by Philip Monk

This installation will be Swiss duo Taiyo Onorato & Nico Krebs' first presentation in Canada. Their critical and timely suite of images reflects on the current state of the planet and humanity's drastically changing perception of the future. Using a variety of techniques to disrupt traditional representations and readings of beauty-oriented images of nature, the artists explore the subject of human interference in the natural environment. Positioned alongside a municipal site of governance in Toronto's entertainment district—where the practical considerations of metropolis management and optimism regarding travel and tourism are commonplace—the images' fusion of the documentary and the imagined is heightened. Pointing to both the idyllic landscape and the consequences of climate change, these images of possible futures overtaken by plastic pollution confront everyday realties and fictions. The work poignantly ties these contradictory elements together, and the installation's large scale will immerse viewers in the artist's reflections on a volatile present that is still modifiable. Curated by Bonnie Rubenstein

Cape Town-based Dutch artist Thirza Schaap's photographic series Plastic Ocean touches on pressing contemporary concerns that are front of mind globally. Disarmingly beautiful and delicate upon first glance, a closer inspection of her staged tableaus offers hints to their source material—consumer products that have endured a full commercial lifecycle. The abstracted compositions are carefully constructed from bits of scavenged plastic Schaap has found along the seashore, "disposable" packaging worn and weathered from exposure to the elements. Positioned along the subway platform, the project will impact thousands of daily commuters, in a space where they are accustomed to being targeted with commercial advertisements for new products. Disposability, part and parcel of commuter culture, is turned on its head in this critical and striking installation. Curated by Sara Knelman

Presented throughout Allen Lambert Galleria, Surviving Humanity (2018) by Italian photographer and journalist Alberto Giuliani focuses on forces at work across the globe—the numerous scientific attempts to safeguard ecological and societal longevity. Underscoring the urgency of environmental action, the selection of images and their accompanying texts resonate with the surrounding architecture of the site's glass atrium. In the heart of Canada's financial district,  this exhibition opens a dialogue about the future of the planet, confronting the question asked by Giuliani's children which motivated his extensive explorations: "How will the world be when we grow up?" Curated by Bonnie Rubenstein

In epoch, stage, shell, New York-based artist Kim Hoeckele presents physically and conceptually layered black-and-white photographs, in which she uses her own body to perform sculptural poses, mimicking Greco-Roman–influenced poses and gestures seen in ethnographic, art historical, and commercial images. In this work, Hoeckele reconsiders how women's bodies have historically been presented and "consumed." Often cutting up, layering, reconstructing, and re-photographing, her collaged compositions simultaneously emphasize and disguise her interventions, rendering the images both whole and fragmented, complicating the legacy of the Western art historical canon, and proposing a messier standard of beauty: one that is mixed, eroded, and patched together. Curated by Ben Freedman

Lassen is a topographic and polychromatic exploration of natural landscapes, which it celebrates while simultaneously revealing the artist's uneasiness and anxiety about the current state of the environment. Further, it is an experimental investigation of the chromogenic process. The original enlargements, reproduced in this installation, are hand-printed in sections, resulting from the artist's countless hours in the darkroom, compressing numerous layers of physical and chemical manipulations into one final image. Lassen is a journey through both factual and fictional place; a metaphorical portrait of nature of the Anthropocene era. Curated by Tara Smith

Lassen billboard locations across Canada include:

This installation is presented as an extension of Petros' exhibition at The Power Plant, Spazio Disponibile, which examines links between colonization, migrations, and modernism. Petros created the work in Catania, Sicily, Italy's largest reception area for migrants crossing the Mediterranean, a place where the country comes face to face with the aftermath of its 19th- and 20th-century colonization campaigns in Africa. The installation's waterfront location resonates with the significance of water in the work, evoking grave connotations from colonization to contemporary migration. The artist employs photography to examine parallels between African and European histories, investigating how images and objects can obscure power differentials while connecting people across borders.

Toronto artist Aaron Jones, who works primarily in collage and assemblage, will produce a new site-specific installation using imagery found in the Malvern Public Library's holdings of the Rita Cox Black and Caribbean Heritage book collection. This resource is recognized as one of the most significant and comprehensive collections of Black, Caribbean, and Canadian literature in Canada. Presented as vinyl prints installed in the windows of the library, Jones' compelling assemblages fusing archival materials and images will reveal this treasure trove of material that is publicly available yet rarely seen. This installation is one part of the three-site project Three Thirty which investigates how power is exercised through the construction, manipulation, and occupation of space, focusing on youth and after-school culture in which young people assert their place in their communities. Curated by Anique Jordan,

Working closely with the students of Pearson Collegiate, portrait photographer Ebti Nabag will create life-size portraits of high school students, celebrating the gestures, body language, fashion, and friendships enmeshed in the high school experience. Built in the late 1970s, Pearson Collegiate was intentionally designed, with its hallways, lighting, and classroom locations replicating the "complete neighborhood" of the surrounding community. Nabag's photographic mural installation presented on the building's façade will externalize and commemorate the rich culture that lives within, affirming the presence of youth within the community. Curated by Anique Jordan,

Toronto-based artists Vid Ingelevics and Ryan Walker's installation creates a visual pathway with construction-grade wooden frames displaying photographs taken through windows and apertures of recently demolished buildings installed between two industrial sites in Toronto's Port Lands,. The installation route guides viewers along the grassy median on Villiers Street, from the silos of the defunct ESSROC cement plant on Cherry Street— now a heritage site—to the vicinity of a former metal-recycling facility at 130 Commissioners Street, now an empty field. The images incite contemplation on the transformation of the area, while reflecting on how heritage designation is an inevitable form of curation of a city's industrial past. Curated by Chloe Catan.

Vancouver-based artist Elizabeth Zvonar brings a heightened view of the cosmos to the cityscape with her monumental image Milky Way Smiling, in its second year on display. For this project, Zvonar transformed a photograph from a popular science magazine through digital collage and manipulation. With its band of cosmic light gently curved upwards, her galaxy of shining stars brings the metaphysical to passersby at street level, inciting contemplation of humanity's position and future on a grand scale.

CONTACT fosters and celebrates the art and profession of photography with its annual Festival in May and year-round programming in the CONTACT Gallery in Toronto. CONTACT presents lens-based works by acclaimed and emerging artists, documentary photographers, and photojournalists from Canada and around the world. The curated program of Primary Exhibitions (collaborations with major museums, galleries, and artist-run centers), and Public Installations (site-specific public art projects), are the core of the Festival. These are cultivated through partnerships, commissions, and new discoveries, framing the cultural, social, and political events of our times. The Featured and Open Exhibitions present a range of works by local and international artists at leading galleries and alternative spaces across the city. CONTACT also includes a wide range of events including a book fair, lectures, talks, panels, workshops, and symposia during the Festival and hosts exhibitions and programs at its Gallery throughout the year.