In advance of International Day of the Girl, Breanne Lavallée-Heckert, 23, spent the day on Parliament Hill as part of Plan International Canada's #GirlsBelongHere initiative 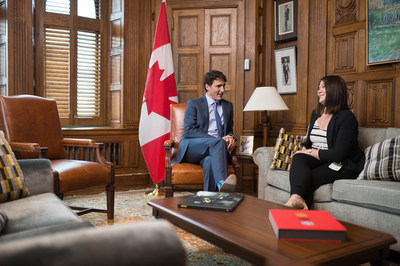 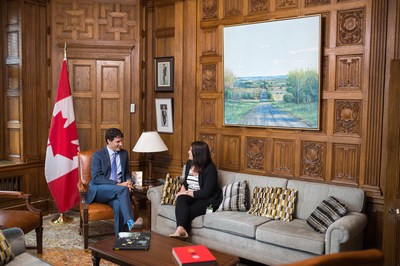 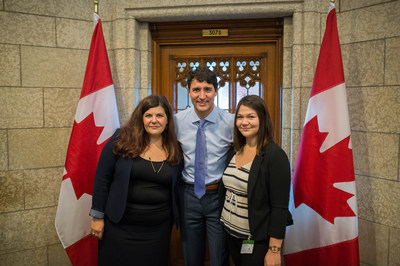 "Meeting Prime Minister Trudeau and symbolically sharing Canada's leadership for the day was a once-in-a-lifetime experience. I'm grateful for this incredible opportunity to show the world that girls belong on Parliament Hill – and anywhere their aspirations take them," says Lavallée-Heckert, a second-year law student at McGill University.

To mark the upcoming International Day of the Girl on October 11, Lavallée-Heckert is one of a diverse group of girls from across Canada that has called on leaders in a variety of sectors – including politicians, journalists, educators, and business executives – to share their role for a day. Plan International Canada's #GirlsBelongHere initiative illustrates every girl's right to be seen and heard in places where females are traditionally underrepresented, including positions of power and leadership.

Prime Minister Trudeau and Lavallée-Heckert spent the day discussing critical issues such as prioritizing girls' and women's rights in Canada and around the world, applying a feminist lens to policy, and empowering a generation of young people to advance gender equality. They also attended an award ceremony for elite athletes with disabilities, met with senior staff, and prepared for Question Period.

"This experience has motivated me to continue raising my voice so that girls and women have equal opportunities to step forward as leaders, influencers, and decision-makers, despite the barriers we face," says Lavallée-Heckert.

Globally, millions of girls still bear the brunt of poverty, are denied an education, forced into marriage and face violence because they are young and female. The majority of the 1.2 billion people living in extreme poverty are girls and women. More than 62 million girls around the world have never stepped foot into a classroom. Each year, 15 million girls under 18 will be married. Globally, women hold 22.8 per cent of parliament seats and constitute just five per cent of mayors. Fewer than three per cent of CEOs heading the world's 500 leading corporations are female.

"It's imperative that we come together to become advocates with and for girls, and to ensure discrimination, stereotypes, and inequalities don't prevent them from achieving their dreams," says Caroline Riseboro, President and CEO of Plan International Canada. "We are inspired by Prime Minister Trudeau's support for our #GirlsBelongHere initiative and for recognizing the immense power and potential of girls, including Breanne."

#GirlsBelongHere is part of Plan International's global mass initiative, with more than 600 participants across 60 countries. In recognition of this year's International Day of the Girl, girls will be stepping into high profile roles including: Prime Minister of Finland, the Deputy Prime Minister of Belgium, the Mayor of Dublin, the CEO of Google Australia, the President of El Salvador, and the CEO of Ikea Switzerland.

About International Day of the Girl

Founded in 1937, Plan International is one of the world's oldest and largest international development agencies, working in partnership with millions of people around the world to end global poverty. Not for profit, independent and inclusive of all faiths and cultures, Plan International strives for a just world that advances children's rights and equality for girls. Because I am a Girl is Plan International's global movement to transform power relations so that girls everywhere can learn, lead, decide and thrive.