QUÉBEC CITY, Oct. 11, 2017 /CNW Telbec/ - The Musée national des beaux-arts du Québec (MNBAQ) is proud to present from October 12, 2017 to January 7, 2018 for the very first time in the history of art the exhibition Mitchell | Riopelle: Nothing in Moderation, a unique encounter between the works of two giants of modern art, the American painter Joan Mitchell (1925-1992) and the Canadian artist Jean-Paul Riopelle (1923-2002). Following the example of such celebrated couples as Auguste Rodin and Camille Claudel, Man Ray and Lee Miller, Diego Rivera and Frida Kahlo, Jackson Pollock and Lee Krasner, their unique creative passion reflects the constellation of romantic and artistic mythologies. The exhibition is meant to be an ode to creation, a genuine celebration of the strength and magnificence of painting. 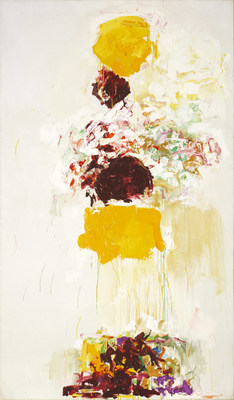 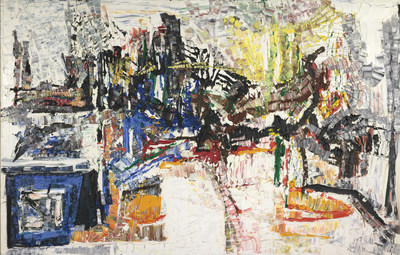 A celebration of two giant practitioners of modernity

Some 60 majors works have been assembled to examine their respective artistic careers in terms of their relationship, from their first meeting in 1955 until their separation in 1979. Designed by the MNBAQ and organized in partnership with the Art Gallery of Ontario (AGO), supported by the Joan Mitchell Foundation in New York and the Estate of Jean-Paul Riopelle in Montréal, the exhibition mainly presents large-format paintings, a number of works on paper and archival documents from more than 30 French, Canadian and American lenders, private and museum collections. The presentation explores how the two artists, who shared their lives for nearly 25 years, in Paris, then in Vétheuil in the Seine valley, developed a studio practice and a distinctive body of work while sustaining a broad dialogue focusing on abstraction. Their tastes for the impressionist heritage, nature and a form of provocation certainly drew them together. Their deeply singular conception of painting and work methods were entirely shaped by their romantic relationship.

Seven inviting themes structure the exhibition in four temporary galleries of the Pierre Lassonde Pavilion: Prologue: Before the Encounter; The Encounter and Its Consequences: 1955-1958; The Rue Frémicourt Years: Resonance and Dissonance, 1959-1967; The Studios in Vétheuil and Saint-Cyr-en-Arthies: Separate Territories, 1968-1974; Canada and the North: Reflections of Two Solitudes, 1975-1977; Heading towards the End: 1978-1979; and Epilogue: The Death of Joan Mitchell, 1992. They guide visitors to the heart of this story of creative passion.

The essential works in the exhibition include Jean-Paul Riopelle's Saint-Anthon (1954), one of a remarkable series of "white" paintings inspired by the snow-capped peaks of the Austrian Alps. The abstract landscape painting from a private collection in New York is a vast white expanse magnified by the presence of delicate, coloured calligraphy. It very likely attracted the attention of Joan Mitchell, who also focused on the dual nature of the white field, perceived at once as a background and as a space.

Mention should also be made of Sans titre (La Fontaine) (1957), a work that reveals the complex bonds between the two painters. Indeed, Mitchell apparently discreetly wrote in the upper left-hand margin of the painting "Le Laboureur et ses enfants, La Fontaine!!" referring to the well-known fable but also to Labours sous la neige, a work that Riopelle had recently produced. The painting, which the painter kept for a long time, can be perceived as a tender nod to Riopelle.

Un jardin pour Audrey (1974), another masterpiece by Mitchell, comes from a private collection in Paris and is one of her most accomplished works. Specialists maintain that it embodies the quintessence of her painting. Riopelle's painting Mitchikanabikong (1975), loaned by the Centre Georges-Pompidou, Musée national d'art moderne, one of the world's foremost collections, is a harbinger of the Icebergs series, a triptych that reflects an identity process in which Riopelle signs each component with linear lines that evoke certain enigmatic profiles of the owl, his animal fetish, found both in his sculpture and works on paper. This major work is a must.

Tribute to Rosa Luxemburg, an apotheosis

To round out the exhibition, be sure to visit or re-visit Tribute to Rosa Luxemburg located in the Riopelle Passage by CGI linking the Pierre Lassonde Pavilion to the rest of the museum. The MNBAQ's masterpiece, a monumental triptych produced in a single sweep when Joan Mitchell's death was announced, is a long fresco comprising 30 paintings whose signs and codes hint at his meeting with his former companion. Here, it assumes its full majesty and meaning.

Two interactive experiences devotes to the works of Mitchell and Riopelle

The fascination engendered, in particular, by the works of Mitchell and Riopelle can express itself through a stimulating virtual experience in the exhibition galleries. Peindre le geste, a 3D interactive device produced by SAGA, allows for the reproduction of the two artists' creative gestures using a brush, a knife or a spatula. Participants will also have access to a palette of 10 colours that the artists used. The resulting work, projected on a wall, can also be shared on Facebook or sent by email.

Visitors can also consult the tablet computers in the mediation space, where 36 archival photographs of the couple accompanied by captions and divided into four major periods afford a fascinating glimpse of the intimate lives of two artists at the peak of their artistic powers.

An essential catalogue for a unique exhibition

Mitchell | Riopelle. Nothing in Moderation, the first exhibition to offer a fresh perspective of the two painters and their 25 years of conjugal life and respective fame, calls for a major publication. The catalogue has over 200 pages and includes texts by guest curator Michel Martin, Yves Michaud, a philosopher and contemporary art specialist, and Kenneth Brummel, Assistant Curator of Modern Art at the Art Gallery of Ontario, and will be a revelation both for the public and for specialists. The publication stems from an initial collaboration between the MNBAQ and 5 Continents, a prestigious Milan publishing house that will ensure international distribution and raise the profile of this unique exhibition created in Québec City.

After Québec City, Toronto and Landerneau

The exhibition, created in Québec City, is a vibrant illustration of the creative passion that united Mitchell and Riopelle. It will be presented at the Art Gallery of Ontario (AGO) from February 17 to May 12, 2018, and from December 9, 2018 to March 10, 2019 at the Fonds Hélène et Édouard Leclerc pour la Culture in Landerneau.

The exhibition Mitchell | Riopelle. Nothing in Moderation is conceived by the Musée national des beaux-arts du Québec and organized in partnership with the Art Gallery of Ontario and the Fonds Hélène & Édouard Leclerc pour la Culture, with the support of the Joan Mitchell Foundation and of the Succession Jean Paul Riopelle.

Mitchell | Riopelle. Nothing in ModerationPierre Lassonde Pavilion of the MNBAQFrom October 12, 2017 to January 7, 2018