VANCOUVER, Aug. 10, 2018 /CNW/ - Lundin Gold Inc. ("Lundin Gold" or the "Company") (TSX: LUG, Nasdaq Stockholm: LUG) is pleased to announce its results for the three and six months ended June 30, 2018. All amounts are in U.S. dollars unless otherwise indicated. 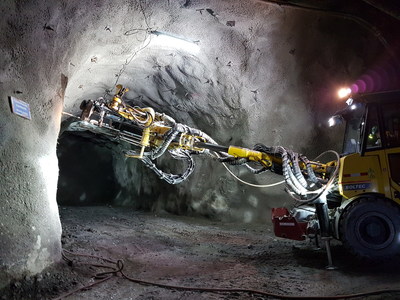 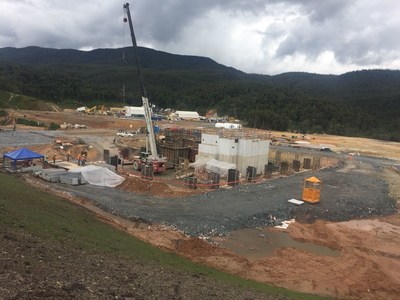 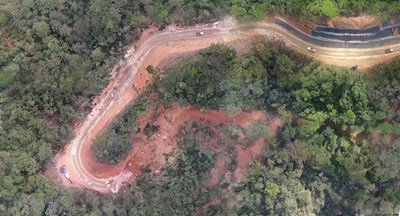 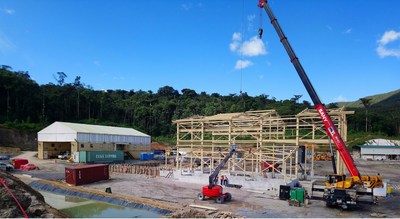 "During the quarter, we continued to de-risk the Project. Site earthworks are nearly complete and we began work on the powerline. Underground development rates exceeded our target advance rates and today we are more than half-way to the orebody and remain on track for first gold production in the fourth quarter of next year," said Ron Hochstein, Lundin Gold's President and CEO. "In addition, we signed an offtake agreement with Boliden for a significant portion of our gold concentrate earlier this month. Combined with the Orion offtake agreement, we have now secured contracts for about 80% of our anticipated production. Most importantly, in July we closed the $350 million senior debt package which completes funding for Fruta del Norte."

As at June 30, a total of 2.2 km of underground mine development had been achieved, with 1,030 m and 1,167 m in the Kuri and K'isa declines, respectively. The daily advance rates improved steadily throughout the quarter achieving an average advance rate of 5.9 m per day in Kuri and 6.6 m per day in K'isa in June, versus a target of 5.16 m per day.

The Company also awarded the mine service fleet in May. With this award, nearly all of the mining equipment purchase orders have been placed.

Process plant and main substation excavation progressed and was nearly complete at the end of the quarter. Construction moved ahead with the ball mill piers and grinding building foundations being poured and were 84% complete. In addition, the carbon-in-leach tank bases were 20% complete. Process plant equipment fabrication is on track and the first equipment (thickeners and the primary jaw crusher) is expected to arrive on site in the third quarter.

The North Access road was an estimated 70% complete with less than 2 km remaining until it is done. The remaining section of the North Access road includes a steep escarpment which requires careful attention for technical and safety reasons. Road construction through this section is progressing well, and the Company remains on track to finish the road by the end of the third quarter of 2018.

The tailings storage facility, polishing pond and east diversion ditch access roads were completed, and work commenced on clearing and grubbing in the polishing pond area.

The regulatory process of formalizing all easements required for the powerline from the Bomboiza substation to the Project is near complete. The contractor has mobilized and started clearing the powerline route from site in June.

Work started on the permanent mine maintenance shop, mine substation and mine compressor station. The fuel storage station is almost finished and is in the final commissioning stages.

The Company's net income in the second quarter of 2018 is mainly due to the revaluation of the Company's long-term debt as more fully explained below. In addition, the Company generated a foreign exchange gain of $7.1 million from its substantial holdings of U.S. dollar cash at its Canadian entities during the quarter compared to a foreign exchange gain of only $0.7 million in the second quarter of 2017. As the functional currency of these Canadian entities is the Canadian dollar, a strengthening of the U.S. dollar against the Canadian dollar during the period generates an unrealized gain in terms of Canadian dollars. This is offset by an increase in office and general expenses of $0.8 million mainly due to an increase in payments to foreign vendors which resulted in an increase in capital outflow tax paid.

During the second quarter of 2018, the Company recorded a derivative gain from the fair value revaluation of its long-term debt of $18.8 million compared to a derivative gain of $4.4 million recognized in the second quarter of 2017. For the six months ended June 30, 2018, the Company has recorded a derivative loss of $5.1 million compared to a derivative loss of $4.4 million in the six months ended June 30, 2017. The derivative gain or loss are driven by the valuation of the Company's long-term debt. Key inputs used by the Monte Carlo simulation include the gold and silver forward prices, gold and silver volatility and other variables. Relatively small variations in these inputs can give rise to significant variations in the fair value of financial liabilities; hence, the large derivative gains and losses recorded in the accounts to date.

As at June 30, 2018, the Company had cash of $393.5 million and a working capital of $377.3 million compared to cash of $35.0 million and a working capital balance of $26.8 million at December 31, 2017. The change in cash was primarily due to net proceeds from the Private Placement of $396.5 million and the final drawdown of $110 million under the gold prepay and stream credit facilities. This is offset by costs incurred for the development of the Fruta del Norte Project of $121.0 million, general and administration costs of $9.9 million and exploration expenditures of $4.2 million.

The Company is focussed on advancing the Project on schedule through to first gold production in 2019. To achieve that goal, the following activities are planned over the next twelve months:

The Company is also in discussions with selected potential parties in order to establish a cost overrun facility which is a condition precedent to the initial draw down of the Facility, expected to occur in the first quarter of 2019.

Exploration is currently focused on mapping and geochemical sampling of the Puente-Princesa target. Other targets may be mapped and sampled during 2018 depending on results. Drill permitting continues for a number of epithermal gold-silver target areas around the Suarez basin.

The technical information relating to the Fruta del Norte Project contained in this Press Release has been reviewed and approved by Ron Hochstein P. Eng, Lundin Gold's President and CEO who is a Qualified Person under NI 43-101. The disclosure of exploration information contained in this MD&A was prepared by Stephen Leary, MAusIMM CP(Geo), a consultant to the Company, who is a Qualified Person in accordance with the requirements of NI 43-101.

The Company's consolidated financial statements for the three and six months ended June 30, 2018 and related management's discussion and analysis are available on the Company's website at www.lundingold.com or under its profile on SEDAR at www.sedar.com.

The information in this release is subject to the disclosure requirements of Lundin Gold under the EU Market Abuse Regulation. This information was submitted for publication August 10, 2018 at 2:00 p.m. PT through the contact persons set out below.

Caution Regarding Forward-Looking Information and StatementsCertain of the information and statements in this press release are considered "forward-looking information" or "forward-looking statements" as those terms are defined under Canadian securities laws (collectively referred to as "forward-looking statements").  Any statements that express or involve discussions with respect to predictions, expectations, beliefs, plans, projections, objectives, assumptions or future events or performance (often, but not always, identified by words or phrases such as "believes", "anticipates", "expects", "is expected", "scheduled", "estimates", "pending", "intends", "plans", "forecasts", "targets", or "hopes", or variations of such words and phrases or statements that certain actions, events or results "may", "could", "would", "will", "should" "might", "will be taken", or "occur" and similar expressions) are not statements of historical fact and may be forward-looking statements.

This press release contains forward-looking information in a number of places, such as in statements pertaining to: the anticipated timing of production and the progress of the development, construction and operation of the Project, improvements to site logistics and completion of camp infrastructure and the acquisition of land and surface rights, the success of the Company's exploration plans and activities, exploration and development expenditures and reclamation costs, timing and success of permitting and regulatory approvals, project financing and future sources of liquidity, capital expenditures and requirements, future tax payments and rates, cash flows and their uses.

Lundin Gold's actual results could differ materially from those anticipated.  Management has identified the following risk factors which could have a material impact on the Company or the trading price of its shares: the ability to arrange financing and the risk to shareholders of dilution from future equity financings; the ability to maintain its obligations under the gold prepay and stream credit facilities, the Facility and other debt; risks related to carrying on business in Ecuador; volatility in the price of gold;  the timely receipt of regulatory approvals, permits and licenses; risks associated with the performance of the Company's contractors; risks inherent in the development of an underground mine; deficient or vulnerable title to mining concessions and surface rights; shortages of critical resources, labour and key executive personnel, such as input commodities, equipment and skilled labour, and the dependence on key personnel; risks associated with the Company's community relationships; unreliable infrastructure; volatility in the market price of the Company's shares;  the potential influence of the Company's largest shareholders; uncertainty with the tax regime in Ecuador; measures required to protect endangered species; the cost of compliance or failure to comply with applicable laws; exploration and development risks; the accuracy of the Mineral Reserve and Resource estimates for the Fruta del Norte Project; the Company's reliance on one project; risks related to artisanal and illegal mining; uncertainty as to reclamation and decommissioning;  risks associated with the Company's information systems; competition in the mining industry; the ability to obtain adequate insurance; risks of bribery or corruption; the potential for litigation; and limits of disclosure and internal controls.