Second-hand transactions responsible for 1.23% of Canada's GDP, according to Kijiji Second-Hand Economy Index 2019

MONTREAL, Nov. 4, 2019 /CNW Telbec/ - Four out of five Canadians participated in the second-hand economy in 2018, fueling a $27.3 billion second-hand economy that has grown in size annually since 2015. The 5th annual Kijiji Second-Hand Economy Index reveals a shift in consumer motivations towards "community-minded commerce", with Canadians increasingly driven by the altruistic and ecological benefits of exchanging used items. 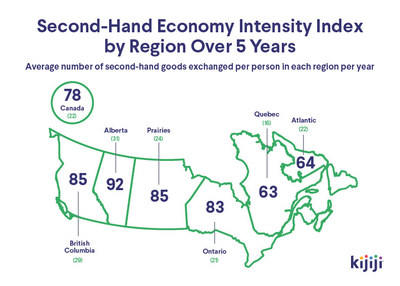 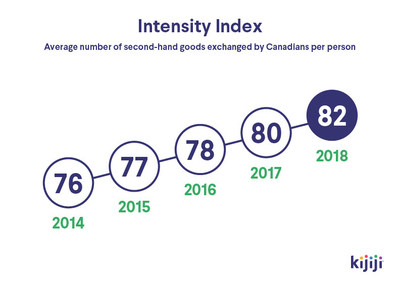 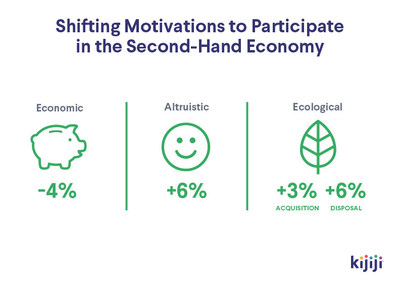 While financial motivations for buying and selling second-hand continue to be the leading reasons for participation in the second-hand economy, they have shrunk by 4% over the past five years. At the same time, there has been a 6% increase in disposal driven by altruism - with consumers aiming to have a positive impact on their fellow citizens, the community and society as a whole. Ecological motivations are also becoming more important (+6% for disposal and +3% for acquisition), reflecting a national focus on protecting the planet and reducing waste. In 2018 alone, Canadians gave 2.4 billion items a second life - 250 million more items than in 2014.

The Kijiji Second-Hand Economy Index, released today, shows Canada embracing the second-hand economy like never before. The rate of second-hand acquisitions has grown 14% since 2014, fuelled by the availability of technology that connects buyers and sellers and a shifting attitude towards second-hand goods. In fact, the "Intensity Index,'' or the average number of second-hand items acquired or disposed of by every Canadian in a year, has risen from 76 in 2014 to 82 now, representing an increase of 8%. The majority of this shift comes from Canadians acquiring more - now 40 items per year up from 35, rather than disposing (42 now versus 41), showing a growing positive attitude among Canadians towards acquiring and using second-hand items.

This year's Index shows a growth trend that has remained consistent since it was launched. Among the other report's highlights:

Launched in 2015, the Kijiji Second-Hand Economy Index 2019 analyzes all facets of second-hand practices in Canada, from buying, selling, and trading or donating via peer-to-peer channels such as online classifieds, donations and local thrift shops. The report was conducted on behalf of Kijiji by the Observatoire de la consommation responsable (OCR) at the Université du Québec à Montréal (UQAM).

"Each year we looked at the study, it was clear that the second-hand economy created massive macro and micro economic benefits. When we looked at the five years of data combined, we saw that this enormous economic activity isn't simply driven by financial benefits. Canadians are more mindful and want to leave a positive impact on their community and environment alike," says Matthew McKenzie, General Manager, Kijiji Canada. "As a result, we see that Canadians have a growing desire to acquire second-hand items. There's an opportunity for Canadian individuals and businesses to benefit through meeting market demand by selling their second-hand goods."

Quebecers not harnessing potential of second-hand

In 2018, an average of 78% of people participated in the second-hand economy in Quebec vs. 82% nationally. Quebec's Intensity Index is also the lowest across the country at 63 compared to Canada sitting at 82.

"The vibrancy of the second-hand economy is driven by various trends in our overall economy and society. Firstly, consumers are looking more and more to take meaningful actions that can lead to greater community benefit. Additionally, the stigma around second-hand goods is fading away as we see more Canadians willing to acquire second-hand goods." explains Fabien Durif, co-author of the Kijiji Second-Hand Economy Index study and Director of the Observatoire de la consommation responsable. "After seeing steady annual increases for the past five years of the Intensity Index, going from 76 to 82, it is a safe bet that the second-hand economy in Canada will continue to grow over the next five years." concluded Fabien.

About the Kijiji Second-Hand Economy IndexThe survey was conducted online for the Observatoire de la Consommation Responsable (OCR) of the Université du Québec à Montréal (UQAM) in partnership with MBA Recherche between September 18 to October 12, 2018. Primary data were collected using a sample of 5,625 respondents aged 18 and older representative of the Canadian population. Respondents were selected from a pan-Canadian Web panel according to pre-specified retention criteria such as gender, age and place of residence. Given that responses were obtained from a panel, computation of the margin of error does not apply. This research was conducted under the supervision of Professor of Marketing Fabien Durif and in collaboration with Professor of Economics Marie Connolly, both from the UQAM's School of Management.

About Kijiji Kijiji, which means "village" in Swahili, is the number one classifieds website in Canada, connecting over 16 million buyers and sellers each month. Kijiji offers Canadians an easy way to buy and sell and find apartments, jobs and services on a local level.  At any given time, there are more than 6 million listings on the network and two new ads are posted on Kijiji every second of every day. Kijiji makes it easy for Canadians to find exactly what they're looking for in their own community.