VANCOUVER, Sept. 17, 2018 /CNW/ - With the recent announcement that C21 Investments Inc. (CSE: CXXI) had signed a letter of intent to acquire Grön Chocolate LLC and Grön Confections (GrönCBD) LLC in Oregon, the company surpassed US$75 million in pending and closed acquisitions in the United States since its relaunch as a cannabis company in January of 2018. 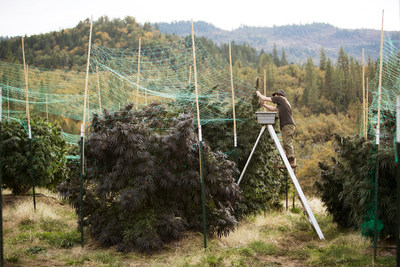 "C21 Investments continues to rapidly implement our strategy of acquiring established, revenue-producing and profitable cannabis operations involved in cultivation, processing, branding and retailing in selected American states," said Robert Cheney, Chief Executive Officer, C21 Investments. "We believe the U.S. cannabis market presents an attractive opportunity for profitable growth, especially for firms like C21 Investments that are vertically integrated, and can add value for shareholders at each stage of the production and sales processes."

Since C21 Investments announced in January that it will focus on the cannabis sector, it has acquired, or announced agreements to acquire, seven cannabis companies in Oregon and Nevada as follows:

.C21 Investments intends to add to its capital base this fall with a debt or equity capital raise of C$20 million in order to close and pay for the announced acquisitions, commence targeted capital spending and for general working capital purposes moving forward.

In addition to strategic acquisitions of top-tier cannabis companies, C21 Investments has been successful in ensuring that the talent of each operation continues to perform and grow in order to provide a strong and ethical culture for its group of companies.

"We have assembled an outstanding team of entrepreneurial and experienced leaders in the cannabis sector," said Mr. Cheney. "Together, we have developed a collective vision that will enable C21 Investments to aggressively compete."

Mr. Cheney believes that C21 Investments has lots of room for profitable growth because it has a strong and growing foothold in the United States, which is the largest cannabis market in the world with expected annual sales of approximately US$11 billion in 2018, and projected to exceed approximately US$23 billion in 2022*. He also believes that C21 Investments' management team is creating long-term value for shareholders by taking a disciplined approach to capital allocation and balance sheet management.

"We are making disciplined investments and acquiring successful companies with outstanding management and strong growth potential," he said. "We're in this business for the long term, and we are excited about our future."

Disclaimer: This press release contains "forward-looking information" within the meaning of applicable securities legislation. Forward-looking information includes, but is not limited to, statements with respect to the Company's future business operation, expectations of gross sales, the opinions or beliefs of management and future business goals, statements regarding the timing and completion of C21's USA acquisitions.  Generally, forward looking information can be identified by the use of forward-looking terminology such as "plans", "expects" or "does not expect", "is expected", "budget", "scheduled", "estimates", "forecasts", "intends", "anticipates" or "does not anticipate", or "believes", or variations of such words and phrases or state that certain actions, events or results "may", "could", "would", "might" or "will be taken", "occur" or "be achieved". Forward-looking information is subject to known and unknown risks, uncertainties and other factors that may cause the actual results, level of activity, performance or achievements of the Company to be materially different from those expressed or implied by such forward-looking information, including but not limited to general business, economic and competitive uncertainties, regulatory risks including risks related to the expected timing of the Company's participation in the Adult Use market, market risks, risks inherent in manufacturing operations and other risks of the cannabis industry. Although the Company has attempted to identify important factors that could cause actual results to differ materially from those contained in forward-looking information, there may be other factors that cause results not to be as anticipated, estimated or intended. There can be no assurance that such information will prove to be accurate, as actual results and future events could differ materially from those anticipated in such statements. Accordingly, readers should not place undue reliance on forward looking information. Forward-looking information is provided herein for the purpose of presenting information about management's current expectations relating to the future and readers are cautioned that such information may not be appropriate for other purposes. The Company does not undertake to update any forward-looking information, except in accordance with applicable securities laws. This Release does not constitute an offer of securities for sale in the United States, and such securities may not be offered or sold in the United States absent registration or an exemption from registration or an exemption from registration.

The CSE has not accepted responsibility for the adequacy or accuracy of this release.