Kip Kangogo defends his title with seventh win in 10 races

VANCOUVER, June 24, 2018 /CNW/ - More than 6,700 people took part in the Scotiabank Vancouver Half-Marathon and 5k, raising an estimated $970,000 for 70 local charities through the Scotiabank Charity Challenge. This brings the grand total since 2007 to over $8 million. 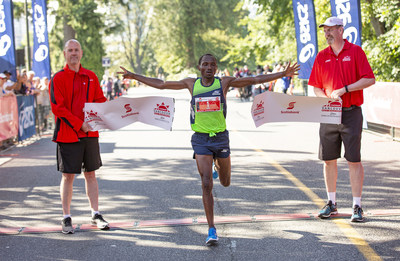 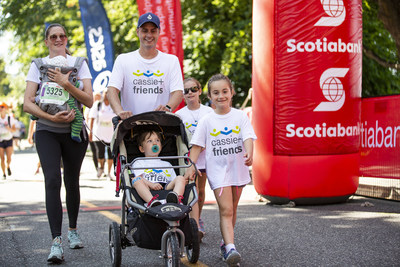 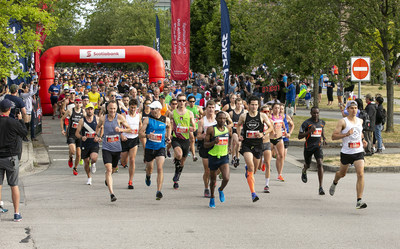 "Thanks to the commitment of the Scotiabank Charity Challenge participants and the generosity and support of the people of Vancouver, we've seen our fundraising efforts make a meaningful impact in the community, year after year," said Larry Clements, District Vice President of Vancouver and Richmond District at Scotiabank. "Scotiabank's goal has always been to help create a better life for people in the communities we serve. That's why we're so excited to celebrate the 12th annual Scotiabank Charity Challenge during the Scotiabank Vancouver Half-Marathon and 5k."

Scotiabank believes in helping young people reach their infinite potential, and many organizations who take part in the Scotiabank Charity Challenge have a direct impact on our local youth. Young people are our future leaders and Scotiabank aims to help provide them with the skills and resources they need to succeed. This year's top fundraising charity is Cassie & Friends, with 170 participants raising $215,000 to support juvenile arthritis and other rheumatic diseases.

The Scotiabank Charity Challenge is a turnkey fundraising program that provides a simple way for runners in these races to support local causes that make a significant impact on Canadian communities. Participating charities keep 100 per cent of the proceeds raised, as Scotiabank pays for all related transaction and credit card fees. Scotiabank offers the Scotiabank Charity Challenge at six sponsored marathon events across Canada including Montréal, Halifax, Ottawa, Calgary, Vancouver and Toronto.

Participants who raised $2,500 as part of the Scotiabank Charity Challenge will receive 1000 SCENE® Points. Learn how to take part in this offer.

About the Scotiabank Vancouver Half-Marathon & 5kThe Scotiabank Vancouver Half-Marathon & 5k is organized by the Canada Running Series, the nation's premier running circuit with 7 events: 4 in Toronto, 2 in Vancouver and 1 in Montreal.  It annually attracts some 60,000 participants and raises more than $6 million for some 320 mostly-local charities.  The Series includes the IAAF Gold Label Scotiabank Toronto Waterfront Marathon, and the Athletics Canada National Marathon Championships. Since 1999, CRS has gained international recognition for innovation and organization.

We are passionately committed to staging great experiences for runners of all levels from Canadian Olympians and International stars, to healthy lifestyle people and charity runners; and to making sport part of sustainable communities and the city-building process.  Our mission is "building community through the sport of running."

About ScotiabankScotiabank is Canada's international bank and a leading financial services provider in North America, Latin America, the Caribbean and Central America, Europe and Asia-Pacific. We are dedicated to helping our 24 million customers become better off through a broad range of advice, products and services, including personal and commercial banking, wealth management and private banking, corporate and investment banking, and capital markets. With a team of more than 89,000 employees and assets of over $926 billion (as at April 30, 2018), Scotiabank trades on the Toronto (TSX: BNS) and New York Exchanges (NYSE: BNS). For more information, please visit www.scotiabank.com and follow us on Twitter @Scotiabank.