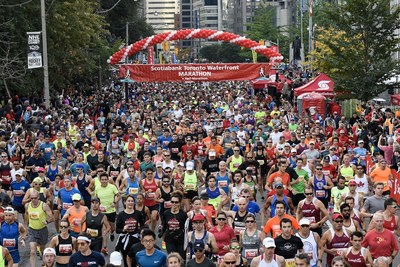 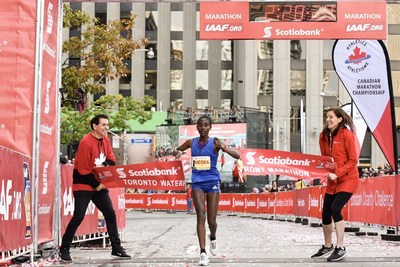 Kenya's Philemon Rono surged away from his countryman Dickson Chumba at the 30 kilometre mark to win the Scotiabank Toronto Waterfront Marathon in the time of 2:06:52, the fastest time ever run on Canadian soil. Dickson Chumba took second, while Ethiopia's Solomon Deksisa finished third. Rono's impressive performance also made Toronto Waterfront, the fastest marathon in North America this year.

"We congratulate all of the runners of this year's Scotiabank Toronto Waterfront Marathon, and a special thanks to those who dedicated their run to one of the local charities associated with the Scotiabank Charity Challenge," said Kyle McNamara, Executive Vice President, Global Retail Banking Technology at Scotiabank. "Through the Scotiabank Charity Challenge, runners raise funds for a variety of important charities, including ones committed to helping young people reach their infinite potential, a key priority for Scotiabank."

This year's marathon also paid special tribute to Canadian marathon legend, Ed Whitlock, who passed away earlier this year. The race began with a minute of silence in Whitlock's memory, followed by the inclusion of three designated pacemakers, who paced his most recognized world marathon record times: 2:54:49 (age 73), 3:15:54 (age 80) and 3:56:38 (age 85).

The Scotiabank Charity Challenge is a turnkey fundraising program that provides a simple and effective way to support local causes that make a big difference in people's lives. Participating charities keep 100 per cent of the proceeds raised, as Scotiabank pays for all transaction and credit card fees.

To see a list of charities involved in the Scotiabank Charity Challenge, please visit http://www.torontowaterfrontmarathon.com/community-and-charity/scotiabank-charity-challenge/

About the Scotiabank Toronto Waterfront MarathonAn IAAF Gold Label race, the Scotiabank Toronto Waterfront Marathon is Canada's premier, big-city running event, the Athletics Canada National Marathon Championships, and the Grand Finale of the 7-race Canada Running Series. In 2016 it attracted 26,000 participants from 70 countries, raised $3.24 million for 182 charities through the Scotiabank Charity Challenge, and contributed an estimated $35 million to the local economy. The livestream broadcast was watched by more than 72,000 viewers from 129 countries. http://STWM.ca

About ScotiabankAt Scotiabank, we aim to support organizations that are committed to helping young people reach their full potential. Young people are our future leaders and Scotiabank's goal is to help ensure that they have the necessary skills and resources they need to support their success. Together with our employees, the Bank supports causes at a grassroots level. Recognized as a leader for our charitable donations and philanthropic activities, in 2016, Scotiabank contributed more than $70 million to help our communities around the world.

Scotiabank is Canada's international bank and a leading financial services provider in North America, Latin America, the Caribbean and Central America, and Asia-Pacific. We are dedicated to helping our 24 million customers become better off through a broad range of advice, products and services, including personal and commercial banking, wealth management and private banking, corporate and investment banking, and capital markets. With a team of more than 88,000 employees and assets of over $906 billion (as at July 31, 2017), Scotiabank trades on the Toronto (TSX: BNS) and New York Exchanges (NYSE: BNS). For more information, please visit www.scotiabank.com and follow us on Twitter @ScotiabankViews.