MONTREAL, Dec. 11, 2017 /CNW Telbec/ - Air Canada embarked today on the next phase of its transformation with the entry into scheduled service of its new Boeing 737 MAX 8 aircraft. Flight AC137 from Toronto to Calgary this morning was the first to be operated using the 169-seat, fuel-efficient aircraft, featuring Air Canada's next generation in-flight entertainment system, spacious overhead storage bin capacity and Boeing's Sky Interior. Throughout the day it will then fly passengers from Calgary to Montreal, followed by service from Montreal to Vancouver. 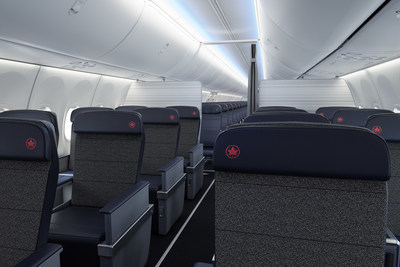 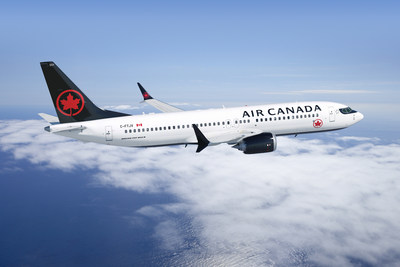 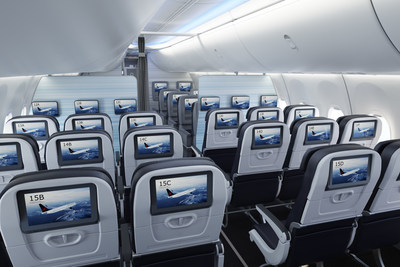 "Introducing a new aircraft type to the fleet is always exciting for an airline, but we know customers will be even more thrilled by the Boeing 737 MAX, which is set to become the mainstay of our North American, narrow-body fleet. With this new aircraft we are introducing the next generation of our onboard entertainment system and customers will find ample storage space for carry-on baggage in its generous overhead bins," said Benjamin Smith, President, Passenger Airlines at Air Canada.

"The 737 MAX is also more fuel efficient and quieter than the older, narrow-body aircraft it will replace, benefitting the environment. This increased efficiency will also enable us to compete more effectively and gives the aircraft extended range capabilities so we can launch new city pairings within North America, and routes to select international destinations. Combined with our fleet of Boeing 777 and Boeing 787 Dreamliner aircraft, the Boeing 737 MAX will ensure Air Canada continues to have one of the most modern fleets among global carriers," said Mr. Smith.

Air Canada has 61 firm orders for the 737 MAX. They are to be delivered by 2021, with 18 due to enter the fleet by the end of 2018. Its first scheduled flights in North America include service to Toronto, Calgary, Vancouver and Montreal. The aircraft is also scheduled to operate internationally to Keflavik, Dublin and Shannon starting in summer 2018. Air Canada has configured the 737 MAX in two cabins of service, North American Business and Economy. Features of the new aircraft include:

For more information, including photographs of the aircraft interior, please go to https://www.aircanada.com/ca/en/aco/home/about/media/photos-logos.html.

Air Canada is Canada's largest domestic and international airline serving more than 200 airports on six continents.  Canada's flag carrier is among the 20 largest airlines in the world and in 2016 served close to 45 million customers. Air Canada provides scheduled passenger service directly to 64 airports in Canada, 60 in the United States and 98 in Europe, the Middle East, Africa, Asia, Australia, the Caribbean, Mexico, Central America and South America. Air Canada is a founding member of Star Alliance, the world's most comprehensive air transportation network serving 1,300 airports in 191 countries. Air Canada is the only international network carrier in North America to receive a Four-Star ranking according to independent U.K. research firm Skytrax, which also named Air Canada the 2017 Best Airline in North America. For more information, please visit: www.aircanada.com/media, follow @AirCanada on Twitter and join Air Canada on Facebook.