(Editor's Note: First images of the interior of Air Canada's new A220 are available at https://www.aircanada.com/ca/en/aco/home/about/media/photos-logos.html)

MONTREAL, Aug. 14, 2019 /CNW Telbec/ - Air Canada today announced it will operate year-round, non-stop service between Montreal and Seattle on its newest narrowbody aircraft, the Airbus A220-300. The new flight, which offers customers Business and Economy class service with Air Canada's newest in-flight entertainment system, onboard Wi-Fi and more, will start in the spring of 2020. 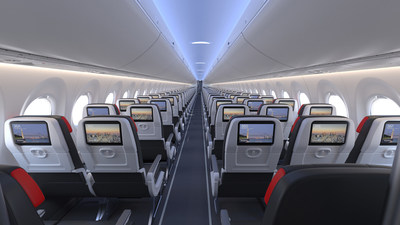 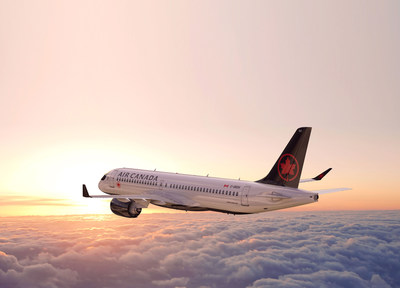 Special introductory fares from Montreal to Seattle start as low as $315 CDN one-way, all in. Tickets are now available for purchase at aircanada.com or through travel agents until August 28 for travel between May 4 and July 31, 2020.

"With the only non-stop service between the two cities, Air Canada is strengthening its position in the Seattle market and providing yet another key link for business and leisure travellers alike. This new route also further strengthens and expands our service from our Montreal hub," said Mark Galardo, Vice President of Network Planning at Air Canada. "Our customers will benefit from innovative design features in a spacious and comfortable cabin. When connecting through Montreal or other hubs across Canada onward to international destinations, passengers travelling on an A220 will now have a seamless narrowbody-to-widebody aircraft cabin experience all along their journey.

"Designed and assembled in Quebec, Air Canada's Airbus A220-300 aircraft combines performance and modern technology, as well as unparalleled environmental benefits. The comfort and exceptional quality of this aircraft, which reflects Quebec's engineering expertise, are game-changing for airlines. It is therefore with enthusiasm and pride that I welcome Air Canada's new Montreal-Seattle route, which will be operated by one of the most innovative and efficient aircraft in the world. This new service confirms Montreal's strengthened role as an air transport hub in North America and its importance for the economic development of all of Quebec," said Pierre Fitzgibbon, Minister of the Economy and Innovation and Minister responsible for the Lanaudière region.

"We are delighted to be welcoming this new route to Seattle provided by Air Canada. It will enable leisure travellers and the business community to enjoy the charms of this modern city, known for its green spaces and especially as a global aeronautical and technology hub. We are also very proud to note that this is the 153rd direct destination served from YUL and will be the first new route operated by the A220, an aircraft manufactured on our YMX International Aerocity of Mirabel site. This is a tremendously proud moment for all the employees working on the site and a powerful reflection of Quebec's know-how!" said Philippe Rainville, President and Chief Executive Officer of Aéroports de Montréal.

"On behalf of all Tourisme Montréal partners, I welcome Air Canada's efforts to improve the accessibility of our city. The addition of service to Seattle is very important for our business market and will also have a significant tourism impact. This flight will provide excellent opportunities for Montreal, confirming its status as a gateway to America," said Yves Lalumière, President and CEO of Tourisme Montréal.

"Canada is our second largest air travel market, after Mexico, and Montreal has been a missing link," said Port of Seattle Commission President Stephanie Bowman. "Seattle leisure and business travellers alike have been eager for nonstop service to Montreal, and we are thrilled that Air Canada is building on its presence in our market by opening this route."

Flights are timed to provide connectivity to and from Europe and North Africa through Air Canada's expansive global network at its Montreal hub, including Casablanca, Paris, Nice, Lyon, Algiers, London, Frankfurt, Geneva, Rome, Dublin and more.

Starting the same day, Air Canada will also begin service with the A220 between Toronto and San Jose, California.

Air Canada's first Airbus A220-300, built at Airbus Canada's Mirabel facility employing 2,500 people, is scheduled to be delivered later this year. Each A220 includes parts from 30 Canadian suppliers.

To be initially deployed on existing Canadian and transborder routes out of Montreal and Toronto such as Ottawa, Winnipeg, Calgary, Edmonton and New York – La Guardia, the A220-300 will open new markets such as the Montreal-Seattle and Toronto-San Jose flights announced today.

The two-class cabin will have a total of 137 seats: 12 in a 2x2 configuration in Business Class and 125 in a 3x2 layout for Economy passengers. Customers will have more personal space thanks to the widest economy seats in the fleet, and the largest overhead stowage bins for an aircraft this size.

Additional features include larger windows and full-colour LED ambient and customizable mood lighting that contribute to reducing fatigue while travelling. The high ceilings, extra shoulder room and storage make this an unparalleled interior in the narrowbody segment.

Every seat on the A220 features a Panasonic eX1 in-flight entertainment system with content available in 15 languages and featuring more than 1,000 hours of high-quality entertainment, including access to Bell Media's premium entertainment service, Crave, and Canadian-based multi-platform audio service, Stingray.

The A220 will come equipped with satellite based high speed connectivity for Wi-Fi access with USB A, USB C, and AC power available to every passenger.

The A220 will also further Air Canada's environmental commitment as its innovative geared turbofan engines are projected to yield a 20 per cent reduction in fuel consumption per seat and NOx emissions 50 per cent below CAEP/6 standards. The A220 is also the quietest aircraft in its category thanks to its new technologies.

Headquartered in Montreal since 1949, Air Canada is the largest airline in Canada and among the 20 largest air carriers in the world.

Air Canada's order of 45 A220s helps maintain 2,500 jobs at Airbus Canada's Mirabel plant. Final assembly of the Pratt & Whitney PurePower PW1500G engines for the A220 is also done in Mirabel, while the flight simulator used to train the company's pilots was manufactured by CAE. With the arrival of the A220, Air Canada has also committed to ensuring that heavy airframe maintenance on the aircraft is done in Quebec.

Air Canada serves a total of 11 airports in Quebec. The international reach of Air Canada's network opens Quebec to the world and represents an important tool for economic development within the context of globalization.

Air Canada, Air Canada Rouge and its regional airline partners flying under the Air Canada Express banner operate on average approximately 2,400 flights per week between Montreal and 99 destinations: 27 in Canada, including nine in Quebec, 25 in the United States, 22 in the Caribbean, Central America and Mexico, 17 in Europe, two in Asia, two in North Africa, one in the Middle East and two in South America.

Including our Air Canada Express partners, the airline employs approximately 10,000 across Quebec, and in 2018 for the fifth year in a row, was named among the top employers in Montreal and recognized for its involvement in the community through the Air Canada Foundation among several other criteria.