- Oldest TCM brand in China, with a history of nearly 500 years

- GuoJiaxue, Chairman of GuangYuYuan: "Our Paris Fashion Week campaign is all about connecting with younger consumers. We are the oldest of the 'Big 4' Traditional Chinese Medicine brands, so it's easy to mistake us for being old fashioned. Today, we are reinterpreting our legacy with innovation and flair."

PARIS, Oct. 10, 2017 /CNW/ -- Like other companies honored with the "Time-Honored Brand" appellation, GuangYuYuanis tasked with balancing its heritage and the demands of modern consumers. "Only about 10% of [China Time-Honored Brands] are fit for the demands of the modern economy," according to the website of the State Council of China. 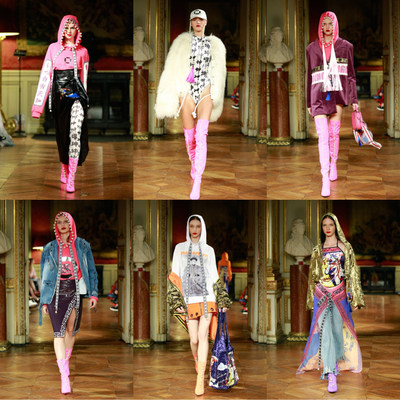 On October 1, GuangYuYuan made its global debut at Paris Fashion Week, sponsoring rising fashion designer Liu Qing, also known as Big-King, in his first Paris runway show, at the MuséeJacquemart-André. The highly unusual collaboration between a TCM brand and fashion design is the brainchild of new hire Wang Xinyu, General Manager of GuangYuYuan's Brand Center. Under Mr. Wang, the company has embarked on a marketing modernization strategy that is truly revolutionary for one of oldest companies in China, if not the world. The runway show is being co-organized with tech giant Tencent, during the finale of Paris Fashion Week, and celebrates embracing both innovation and tradition.

GuoJiaxue, Chairman of the Board of GuangYuYuan Chinese Herbal Medicine Co., Ltd. explained the strategy behind the sponsorship: "Our Paris Fashion Week campaign is all about connecting with younger consumers. We are the oldest of the 'Big 4' Traditional Chinese Medicine brands, so it's easy to mistake us for being old fashioned. Today, we are reinterpreting our legacy with innovation and flair."

Big-King typifies the young customer that GuangYuYuan is seeking out. At the show, he revealed 10 modern looks using elements inspired by traditional Chinese motifs and themes, as well as GuangYuYuan's nearly 500 year history. The star-studded event was attended by celebrities such Celina Jade, representatives from top fashion houses including Gucci and Louis Vuitton, and politicians including former French Prime Minister Jean-Pierre Raffarin.

"To resonate with today's consumers, we're changing how we engage, while underscoring that GuangYuYuan will never compromise when it comes to  product quality or preserving our intangible cultural heritage," Mr. Guo added.

GuangYuYuan (600771 | CHN) was founded in 1541. In 2003, it was acquired by leading Chinese pharmaceutical conglomerate, Xi'an Dongsheng Group, and is listed on the Shanghai StockExchange. In 2006, GuangYuYuan was honored by the Chinese Ministry of Commerce, receiving its "Time-Honored Brand" appellation. Two of GuangYuYuan's oldest products, GuilingJi and Dingkun Dan, have been declared to be part of China's intangible cultural heritage and their formulas have been named national secrets.