NEW YORK, Dec. 12, 2018 /CNW/ -- Yangtze River Port and Logistics Limited (Nasdaq: YRIV) (the "Company"), an international infrastructure company that engages in the business of real estate development via a port logistic project located in the middle reaches of China's Yangtze River in Wuhan, China, today categorically refutes all the allegations made against the Company in Hindenburg Research's report dated December 6, 2018 (the "Report").  In particular, the Company wishes to broadly address certain patently false allegations made in the Report: 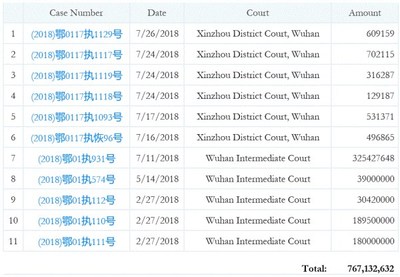 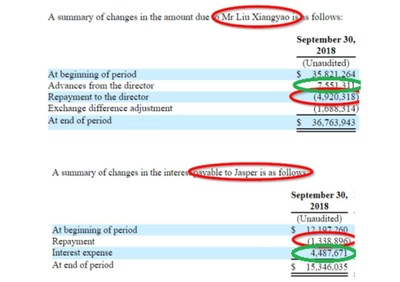 "The unconstructed part of the project is a planned "Logistics Center" that YRIV states it will build on 1.2 million square meters of land leased from a local village. On YRIV's latest quarterly balance sheet, the rights to the land are reported as having a value of $299 million, comprising over 77% of the company's total assets… Despite claiming to lease 1.2 million square meters from the village, our government-sourced maps…show that the total area of the village is only 610 thousand square meters. Moreover, conversations with officials from the village in question revealed that contrary to the company's claims, YRIV has not leased any land from them."

A list of the 11 undisclosed legal judgments mentioned in the Report is set forth below:

The Company is in the process of negotiating a loan restructure with the bank and in the meantime, all payments due are suspended. Also, as a result of negotiations, the bank has not instituted enforcement proceedings. As in the above Items 1-6, because a judgement has already been rendered, the Company has not disclosed it as an ongoing "Legal Proceedings".

3. Money from YRIV's Capital Raises Has Been Used to Pay the Chairman/Controlling Shareholder Rather Than Advance Company's Projects

The Report alleges that the Company has consistently reported large liability balances "due to related parties" on its financial statements. These, in turn, seem to accrue large interest rates which simply get added to the "advances" over time. When capital is raised, cash is then used to pay back the supposed related-party "advances", rather than being employed to further the company's projects.

The Report concluded that there was a total repayment of "loans" of approximately $6.2 million to Mr. Liu. This is not the case. The Report focused on the numbers highlighted in the red circles but neglected the increased amounts highlighted in the green circles which showed increased advances from Mr. Liu to the Company. The net effect of the aforementioned numbers shows a net advance from Mr. Liu to the Company. In addition, as mentioned in the Report, "the total amount of those 19 convertible notes amounted to $8.5 million, of which $3.39 million is outstanding while $5.15 million has been redeemed." As such, there is no way that Mr. Liu would have received $6.2 million from the proceeds of the notes.

"The Report contains numerous errors of facts and misleading speculations that are libelous and we categorically deny such speculations. This Report is largely a rehash of prior allegations made against us and only focuses on certain discrete information to cultivate a distorted view of the Company", said Mr. Xiangyao Liu, Chairman and Chief Executive Officer of the Company. "We have not granted access to Hindenburg nor has Hindenberg ever contacted us to seek any clarification or explanation to the allegations made. These speculations have caused significant damage to our Company and we are resolved to take such actions necessary to defend ourselves and protect the interests of our shareholders. Additionally, we have instructed counsel to explore our recourse against Hindenburg for making such irresponsible, baseless and libelous statements, including but not limited to instituting legal proceedings against them. We are committed to a high level of corporate governance and stand by the integrity of our financial statements and business operations. We will be conducting a special internal investigation into the other allegations made and will report the outcome of such investigation in due course."

Yangtze River Port and Logistics Limited primarily engages in the business of real estate development with a port logistic project located in the middle reaches of the Yangtze River. Yangtze River Port and Limited is a large infrastructure development project implemented under China's latest "One Belt One Road" initiative and is believed to be strategically positioned in Wuhan, a crucial trading window between China, the Middle East and Europe. The logistics center is also expected to provide a number of shipping berths for cargo ships of various sizes. Yangtze River Port and Limited is expected to provide domestic and foreign businesses a direct access to the Free Trade Zone in Wuhan. The project will include commercial buildings, professional logistic supply chain centers, direct access to the Yangtze River, Wuhan-Xinjiang-Europe Railway and ground transportation, storage and processing centers, IT supporting services, among others.

We caution readers that any such statements are based on currently available operational, financial and competitive information, and they should not place undue reliance on these forward-looking statements, which reflect management's opinion only as of the date on which they were made. Except as required by law, we disclaim any obligation to review or update these forward-looking statements to reflect events or circumstances as they occur.