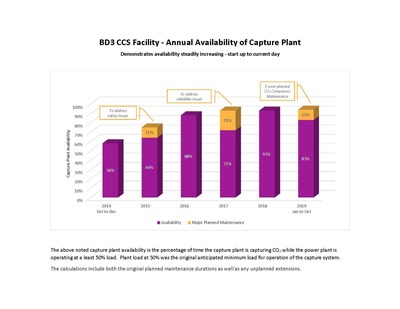 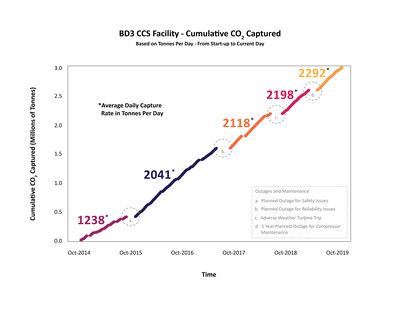 BD3 has the honour of being a first in the world – which means that it has not only pioneered the implementation of the technology but the willingness to be on the forefront of learning and adaptation.  Within five years since it's opening it has made the 3Mt milestone and the capture plant has also performed with successive improved reliability and a steady increase to the daily CO2 capture rate.

The International CCS Knowledge Centre (Knowledge Centre) is often sought after for its ability to share the substantial lessons learned in CCS. BD3 is a testament to learning comes from doing. The Knowledge Centre was designated by its founders, SaskPower and BHP, to share the rich expertise from BD3 with the world – due to CCS's pivotal role to significantly mitigate greenhouse gas emissions (GHGs).

Setting a precedent in large-scale carbon capture, BD3 was the foundation for the Knowledge Centre's second-generation CCS study, the Shand CCS Feasibility Study. This study revealed capital costs for the next plant to be 67% cheaper per tonne of CO2 captured and a capture rate able to reach up to 97% at reduced load while the plant is integrating with renewable electricity supplies. The Knowledge Centre is now extending these learnings to industry source emissions.

Indeed, the world continues to seek understanding and the practical application resulting from BD3's learnings. Following a tour of the plant in May 2019, COP24 President, Michael Kurtyka told the media, "I am here because of the leadership role this country (Canada) and this region (Saskatchewan) is playing on the international scene. You are leaders in the world.  All that you bring to the table internationally is extremely important."

"We congratulate SaskPower's Boundary Dam 3 CCS Facility on capturing 3 million tonnes of carbon dioxide since commencing operations in 2014. This significant milestone clearly demonstrates the viability of CCS technology in delivering clean sustainable energy from coal.  BD3 is showing the path forward for the integration of large-scale CCS technologies with power generation. The lessons learned from its experience are vital for the successful application of CCS technologies across the world and even beyond power generation into industrial sectors such as steel and cement."

About the International CCS Knowledge Centre (Knowledge Centre): Operating since 2016 under the direction of an independent board, the Knowledge Centre was established by BHP and SaskPower with a mandate to advance the global understanding and deployment of large-scale CCS to reduce global GHG emissions. The Knowledge Centre provides the know-how to implement large-scale CCS projects as well as CCS optimization through the base learnings from both the fully-integrated Boundary Dam 3 CCS Facility and the comprehensive second-generation CCS study, known as the Shand Study.  For more info: https://ccsknowledge.com/