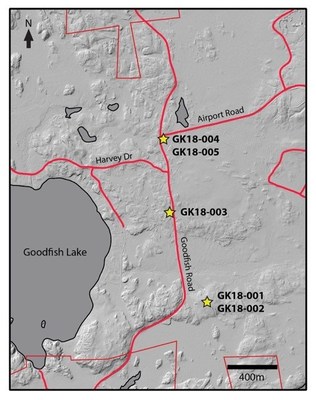 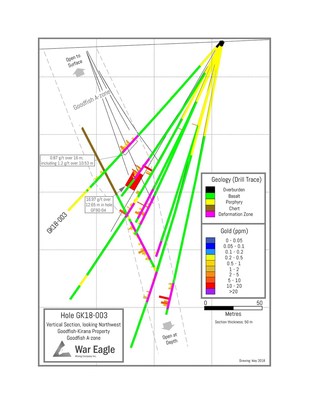 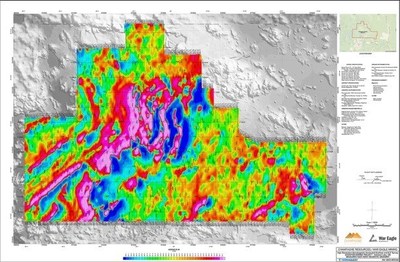 "The preliminary results of the Phase One drilling and geophysical surveys on the Goodfish Kirana Property have provided us with valuable geological information," said Danièle Spethmann, President and CEO of War Eagle. "The assay results, the structural information and the geophysical data are fundamental to guiding the project and provide us with the technical foundation needed to make decisions going forward and in particular our summer program which is now being planned."

Phase I Drill ProgramThe structurally orientated drilling program was designed to test three of the four structural zones identified by previous work (NI43-101, Tom Setterfield, PhD, P.Geo. January 2, 2018). These holes were designed to verify and interpret the structure, lithology and pathfinder elements of the following gold-bearing zones on the Goodfish property (Figure 1) in this press release:

Table 1. Selected intercepts from the Phase I drill program.

Geophysical ResultsResults from the recently completed ground geophysical programs conducted over the Patents area of the Goodfish Kirana block have been interpreted by Bill Doerner of SourceOne Geophysical and are summarized in this press release (Figure 3).

The review of the ground geophysical program recently completed on the Patents has indicated the presence of important structural features and several anomalous areas of high IP chargeability that represent ideal drill targets. Inversion of the historical IP data is underway in an effort to more accurately direct future drilling efforts.

The results of the recently completed 942 km airborne magnetic and VLF surveys (Figure 4) have been delivered and will be incorporated into the geophysical interpretation.

Corporate UpdateWar Eagle is also pleased to announce the hiring of Ms. Joanne Jobin, Principal and Founder of Investor Relations Services Inc. ("IR.INC") as Investor Relations Consultant to the Company.  Ms. Jobin is a seasoned Investor Relations and Corporate Development professional with over 25 years of global investor relations, public relations, corporate affairs, corporate development and communications experience in the natural resource sector. IR.INC, is an established international Investor Relations Company consulting to junior, mid-tier and blue-chip mining, and oil and gas clients. Ms. Jobin has strong, key relationships in the financial and mining industry sectors and will assist War Eagle's management in building and developing its profile as well as develop an IR plan and assist management with its practical Investor Relations duties.  Under the terms of an investor relations consulting agreement between War Eagle and IR.INC effective May 16, 2018, War Eagle will pay IR.INC a monthly fee of $6,000 for strategic investor relations services for a one year period, terminable by either party at any time after six months, upon providing 60 days written notice.

Qualified PersonTom Neelands, P. Geo., Chief Geologist of War Eagle, is a "qualified person" within the meaning of National Instrument 43-101 and has reviewed and approved the technical information in this news release.

Quality ControlWar Eagle Mining uses a quality-control program that includes insertion of blanks and commercial standards in order to ensure best practice in sampling and analysis.

HQ size drill core is sawn in half with a diamond saw. Samples are selected for analysis in standard intervals according to geological characteristics such as lithology and hydrothermal alteration.

Most of the diamond drill core was sampled at 1.5 m intervals. The smallest sample interval was 0.55 m. A standard/blank was inserted every 25 samples. The samples were analyzed by AR (aqua regia) digestion; any samples over 500 ppb were re-analyzed using the fire assay method. In addition, multielement analysis by XRF and ICP were completed. The ICP showed good correlation of gold (Au) with the following elements: Ag, As, Ce, Cu, Hg, Mo, Pb, Sb, and Te.

About War Eagle Mining CompanyWar Eagle is a TSX Venture Exchange listed company focused on the exploration of mineral resource properties in northern Ontario, Canada, with a focus on gold deposits.  The Company's Goodfish Kirana Project is a 10 km long by 3 km wide land package with numerous historical gold showings and significant structural breaks that has been under-explored with modern technology, providing an exciting and unique discovery opportunity. The Goodfish Patents are located within the significant land position held by the Company located in the Kirkland Lake Gold Camp five kilometers from the center of the Town of Kirkland Lake, Ontario, Canada.

This news release was prepared by management of War Eagle, which takes full responsibility for its contents as it relates to War Eagle.