VANCOUVER, July 19, 2018 /CNW/ - War Eagle Mining Company Inc. (TSXV - WAR) ("War Eagle" or the "Company") is pleased to announce that it has completed the purchase of the Deloye Family Claims ("Deloye Claims" or "the Claims") located in the northeast corner of Teck and the northwest corner of Lebel townships, Ontario, 3.1 km north of the Kirkland Main Break. (Figure #1, #2 and #3.) 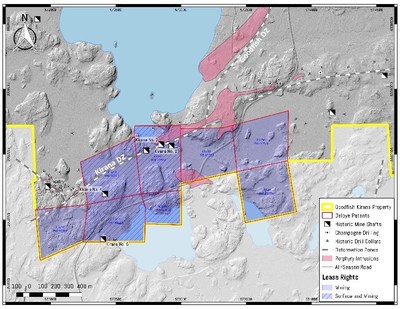 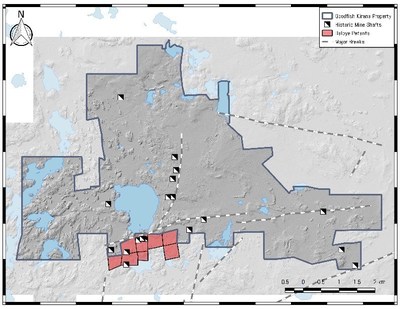 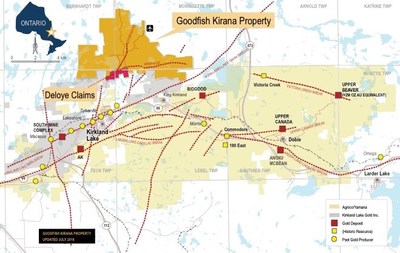 The Deloye Claims land package consists of eight patented mining claims, a total of 122 ha, with mineral rights on all eight claims and surface rights on four of the eight, bringing the current Goodfish Kirana land package to 3,418 ha from 3,296 ha. These claims contain the old shafts and trenches of the historical Kirana Kirkland Lake Gold Mine "Kirana Kirkland Mine", which stopped production in 1936. The reported historical grades for the Kirana Kirkland Mine from the Ontario Department of Mines Vol.1 LVII (1) include "narrow high-grade streaks of $20 to $150 per ton in gold. The 2018 estimated equivalent is between 30 g/t of gold and 145 g/t of gold.

Under the terms of the acquisition, War Eagle has agreed to:

Danièle Spethmann, President and CEO of War Eagle stated: "We are very pleased to have come to an agreement with the Deloye family on the acquisition of these claims. It is expected that the historic Kirana Kirkland Mine, located within the newly acquired Deloye Claims will be a rewarding exploration endeavor for War Eagle. The Mine's historic shafts are located close to the intersection between the two major mineralized structures on our property, the Kirana Deformation Zone and the Goodfish Deformation Zone. Exploration on a small part of this land package was completed in the late 1980's and the rest of the claims have not been efficiently explored to any depth for more than 30 years. We look forward to exploring this prospective ground and anticipate that it will generate positive results for War Eagle."

History of the Deloye Claims

The patented claims and the surface rights have been owned by the Deloye family since the 1970's.

The historical records from the Ontario Department of Mines report that up to 1917, the La Belle Kirkland Mines Ltd. developed six shafts and trenches. Shaft No.1 on claim L1751 was the most developed with an inclined shaft to a depth of 300 feet. This shaft was subsequently deepened to 360 feet, with 1,150 feet of lateral work undertaken at the 100 feet and 250 foot levels. In 1933, Kirana Kirkland Gold Mines Ltd. reported that they had conducted de-watering and chip sampling of shaft and underground levels and also some surface muck samples were taken and assays begun but not completed. The mine was subsequently closed at the outbreak of World War II.

Between 1988 and 1990, Minnova Inc. drilled seven widely-spaced drill holes (KIR 1 to 7, totaling 1,637.5 m) and completed ground geophysics and soil geochemisty. Drill hole KIR-3 located north of Shaft No. 1 (Claim L1751) reported an assay of 21 g/t over 0.3 m near surface. No further exploration work has been undertaken on any of the claims since.

About War Eagle Mining Company Inc.War Eagle is a TSX Venture Exchange listed company focused on the exploration of gold in northern Ontario, Canada. The Kirana-Goodfish property is located five kilometers from the center of the Town of Kirkland Lake, Ontario where over 40 million ounces of gold have been produced. The property is approximately 10 km long by 3 km wide (34 km2) with numerous historical gold showings, historic mines and mineralized deformation zones that have been under-explored with modern technology.

This news release was prepared by management of War Eagle, which takes full responsibility for its contents as it relates to War Eagle.