VANCOUVER, June 18, 2019 /CNW/ - Victory Metals ("TSX-V:VMX") ("Victory" or the "Company") is pleased to announce that its joint venture partner, Ethos Gold ("TSX-V:ECC") ("Ethos"), has commenced drilling at the Iron Point project 22 miles east of Winnemucca, Nevada. Ethos' primary target is Carlin-type gold mineralization hosted in Lower Plate stratigraphy below the Roberts Mountain thrust fault. Some of the world's largest and highest grade gold deposits are found in this Lower Plate stratigraphy. The Lower Plate drill target at Iron Point is immediately west of a north-south striking range front fault at between 500m and 800m depth (see Figures 1 – 5 below). 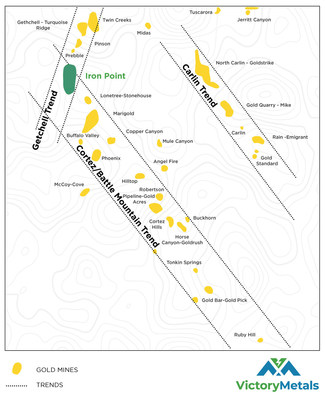 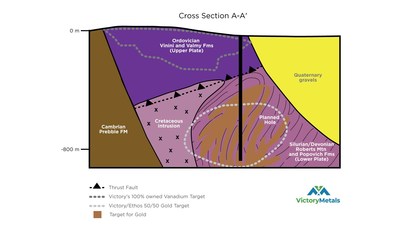 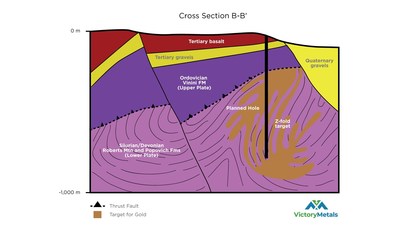 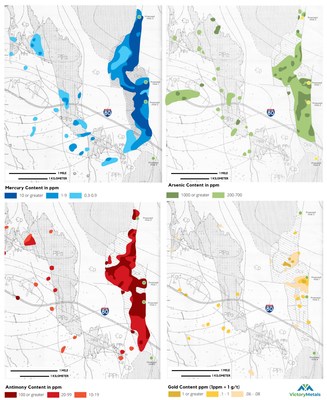 Collin Kettell, CEO of Victory, stated: "Iron Point was initially acquired by Casino Gold for its gold potential with the project representing one of the most historically active gold exploration targets in Northern Nevada. Coincidentally, dialogue with Dr. Henningh in middle of 2018 regarding deeper gold targets led to the recognition of the presence of shallow vanadium mineralization at Iron Point and the formation of Victory Metals as a North American vanadium company. We are ecstatic to have the opportunity to work with Dr. Henningh and test for deeper gold targets at Iron Point, while keeping Victory's focus squarely on vanadium."

Stated Craig Roberts, P.Eng., President & CEO of Ethos: "Our deal with Victory Metals was announced May 17 and we are very pleased to have advanced to the point of having drills turning by June 17. While there is considerable historic exploration work at Iron Point including multiple drill programs resulting in the definition of strong indicator element and gold geochemistry over 5 km north-south along the range front fault, to date Iron Point has not received any significant drilling to deeper levels into Lower Plate stratigraphy to test for Carlin-type gold mineralization. This drill campaign will be the first to systematically test for a deeper Carlin-type target in the Lower Plate at Iron Point. Fortunately we are able to benefit from  this substantial previous nearer-surface work in locating and orienting our planned deeper drilling. Carlin-type targets have potential for significant size and  we are excited to have now initiated this drill campaign."

Stated Dr. Quinton Hennigh: "We have a robust drill plan prepared for testing the 5 km long gold target at Iron Point. The first two vertical holes will test the central part of the target area by cutting through highly geochemically anomalous Upper Plate rocks in search of Carlin-style gold mineralization in Lower Plate rocks beneath. Our third hole tests for similar mineralization in the northern part of the target area where an erosional window has cut down into the recumbent Zed-fold exposing targeted Lower Plate rocks. Our newly added fourth hole, vertical, is positioned in the southern part of the target area and will drill through basalt, gravel and Upper Plate rocks to test the underlying prospective Lower Plate stratigraphy. I am very happy to have this opportunity to test what is perhaps one of the best remaining Carlin-style gold targets left in Nevada."

Extension of Target Area to the South of Interstate 80

Previous mapping, sampling, and drilling along the extension of the range front fault south of Interstate 80 has identified a significant gold and pathfinder element anomalism. There has been no deep drilling in this area to date.  The target model here is similar to, and a continuation of, the target model north of the highway. Ethos has decided to test this target with a vertical hole (Hole 4) to a planned depth of 850m (see location on Figure 2), targeting Lower Plate stratigraphy beneath Upper Plate rocks. Since this area has already been permitted and bonded by Victory in preparation for drill testing the extent of vanadium mineralization in this area, drilling of the deeper gold target can commence immediately.

Overview of the Iron Point Target

Iron Point is located at the intersection of the prolific Getchell and Cortez/Battle Mountain Trends:

At Iron Point, Upper Plate Ordovician Vinini Formation overlies interpreted Lower Plate Silurian-Devonian Roberts Mountain and Popovich Formations, separated by the Roberts Mountain thrust fault dipping shallowly to the west (see Figures 2, 3 and 4 below). North-south striking normal faulting subsequent to the Roberts Mountain thrust activity has down-dropped stratigraphy to the east forming a range front fault, infilled by alluvium and gravels to the east. Some of the strongest Carlin-type gold pathfinder element geochemistry in Nevada is present at Iron Point in footwall rocks immediately west of the range front fault over an approximately 5 km strike distance (see Figure 5 below). Anomalous gold mineralization in geochemical sampling and trenching coincident with this pathfinder geochemistry is also present along this 5 km trend. Historic drilling at Iron Point has encountered multiple intervals of significantly anomalous gold mineralization in Upper Plate rocks and into Lower Plate stratigraphy also immediately west of the range front fault. This includes an interval of Carlin-type gold mineralization along the range front fault interpreted to be smeared fault gouge transported from deeper levels.

Ethos can earn a 50% interest in the gold and silver rights at Iron Point by spending a minimum of C$5.0 million over three years, with minimum expenditures of C$1.0 million in the first year. Following the earn-in a 50-50 joint venture will be formed between Ethos and Victory. Victory will maintain 100% title to the Iron Point claims and on completion of its earn-in Ethos would have a contractual right to 50% of any gold or silver discovery. The vanadium mineralization is near surface with significant spatial separation from the conceptual deeper gold target and is 100% owned by Victory. Furthermore, Victory maintains the right to ensure that any gold exploration and development plans do not interfere with development of its vanadium project.

The Company further announces an aggregate grant of 560,000 stock options to certain directors, officers and consultants of the Company exercisable at $0.63 expiring five years from the date of grant, subject to regulatory approval.

Victory owns a 100% interest in the Iron Point Vanadium Project, located 22 miles east of Winnemucca, Nevada. The project is located within a few miles of Interstate 80, has high voltage electric power lines running through the project area and a railroad line passing across the northern property boundary. The Company is well financed to advance the project through resource estimation and initial feasibility study work. Victory has a proven capital markets and mining team led by Executive Chairman Paul Matysek. Major shareholders include Casino Gold (46%), and management, directors and founders (27%). Approximately 48% of the Company's issued and outstanding shares are subject to an escrow release over three years.

The scientific and technical information in this news release has been review and approved by Calvin R. Herron, P.Geo., who is a Qualified Person as defined by National Instrument 43-101. Please see the Company's website at www.victorymetals.ca.