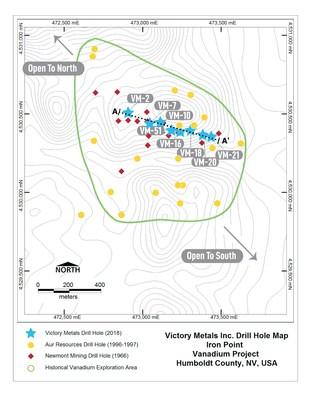 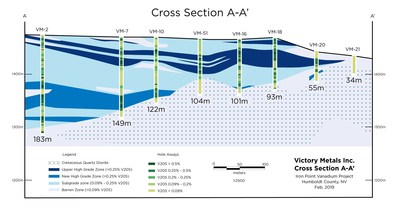 Collin Kettell, CEO of Victory stated, "The first RC holes from our maiden drill program at Iron Point were chosen to confirm the vanadium mineralization and grades reported in historical holes drilled by Newmont in 1966 and Aur Resources in 1996-1997. The significance of Victory's first eight holes cannot be understated. We have not only confirmed the widespread nature of vanadium mineralization along and across strike, we have also extended vanadium mineralization to a depth of 175m (575 feet) with the discovery of the New High Grade Zone. Grades obtained by Aur Resources underrepresented vanadium values as their holes did not fully recover higher-grade mineralization hosted in fractured zones. Victory's drilling with a center return hammer returned higher vanadium values over greater intercept lengths. Many of the historical holes were limited to a depth of roughly 100 meters. By drilling deeper, we have now discovered a second higher grade zone of flat lying vanadium mineralization, yielding some of the highest grade V2O5 intercepts to date.

The initial eight hole RC drilling program was designed to confirm historical results by testing vanadium mineralization along an E-W axis near a high concentration of Newmont and Aur holes (see Figure 1).  These Victory holes were drilled vertically, ranging in depth from 34 m (110') to 183 m (600') and were sampled on 1.52 m (5') intervals.

Comparing results from the first eight holes to the historical drill results, Victory has made the following observations:

The cross-section shown in Figure 2 illustrates three of the important observations discussed above:

As seen from the color coding of vanadium grades, the overall vanadium blanket exceeding 0.09% V2O5 starts at the surface and extends to a depth of 175 m (575') and contains two major, parallel horizons hosting higher-grade (>0.25% V2O5) mineralization, labelled the Upper and New High Grade Zones. Both of these higher-grade vanadium zones tend to inter-finger with subgrade (<0.25% V2O5) mineralization, which is in-keeping with the sedimentary origin of the host rocks.

The stratigraphic section hosting vanadium mineralization consists of thinly-bedded chert and argillite at the top, grading progressively downward to: (1) carbonaceous shale and siltstone of the Upper High Grade zone, (2) interbedded siltstone and argillite of the low grade zone that separates the two higher grade zones, and (3) carbonaceous shale, siltstone, and quartzite comprising the New High Grade Zone. The New High Grade Zone is underlain by non-mineralized mudstone, and in places by a quartz diorite stock or sill complex that appears to cut across the Vinini stratigraphy at a low angle. All the drill holes except for Drill hole VM -21 intersected Vinini stratigraphy.

Assay results for Victory's initial confirmation drilling program are reported below in % V2O5. Intercept lengths are deemed to be true thickness given the flat nature of the mineralized zones being tested by vertical holes.  Intercept lengths are reported as an Overall Length, which includes all assay intervals within the vanadium blanket zone (at a 0.09% V2O5 minimum grade), and also as individual zone intercepts reported as aggregate lengths comprised of samples grading 0.25% V2O5 and greater.

The QP and other site geologists working for Victory directly supervised initial drilling in the field. All samples were split at the drill site using a Gilson bar splitter and Jones riffle splitter, with two samples per 5-foot (1.52m) sample interval collected and placed into heavy plastic bags together with sequentially numbered sample tags. A 2kg sample was collected for assay, while a 4kg reference sample was kept on-site. Three different vanadium standards (71 ppm V, 320 ppm V, and 5172 ppm V) and coarse blank samples were purchased from Minerals Exploration and Environmental Geochemistry (MEG) Inc. of Reno, NV. Victory site geologists inserted field blank, standard, and duplicate samples into the drill sample stream per NI43-101 guidelines, maintaining a 1-in-20 insertion rate for each of the field blank, standard, and duplicate samples such that every 7th sample is a control sample. Field duplicate samples were split from the 4kg reference samples using a Jones riffle splitter.

Drill samples were transported by Victory personnel to locked storage sheds rented by Victory and located in Golconda, NV, about 14km west of the project area. Samples were picked up in Golconda by American Assay Lab. utilizing its own truck and driver and transported directly to American Assay's facility in Reno, NV. At American Assay Lab, the samples were crushed to 70% passing 2mm, and then a 0.3km split was ground to 85% passing 75 micron. A 0.5gm split was digested in a 5 acid process (ICP-5A035 method uses HNO3, HF, HClO4, HCl, H3BO3) and analyzed via ICP-OES. The detection limit for vanadium is 1ppm, the upper limit is 10,000ppm, and sample results are reported in PPM V. As a separate QAQC check, American Assay inserted laboratory standards, blanks, and duplicates into the sample stream. American Assay Lab is accredited by the International Accreditation Service, which conforms with requirements of ISO/IEC 17025:2005.

Victory is currently using ALS Chemex in British Columbia to perform umpire assays on 1-in-20 drill pulps obtained from American Assay Lab and submitted to the ALS Chemex facility in Reno, NV.  Chemex employs a four-acid digestion process (ME-ICP61m method), so Victory is re-numbering the pulp samples and inserting the same field standard samples into the sample stream in order to better compare results between the two labs.

Victory owns a 100% interest in the Iron Point Vanadium Project, located 22 miles east of the town of Winnemucca in Humboldt County, Nevada. The project is located within a few miles of Interstate 80, has high voltage electric power lines running through the project area, and a railroad line passing across the northern boundary of the property. The Company is well financed to advance the project through resource estimation and initial feasibility study work. Victory has a proven capital markets and mining team led by Executive Chairman Paul Matysek. Major shareholders include Casino Gold (50%), and management, directors and founders (25%). Further, over 51% of the issued and outstanding shares of the Company (43,471,014 shares) are subject to an escrow release over 3 years.

On Behalf of the Board of Directors of