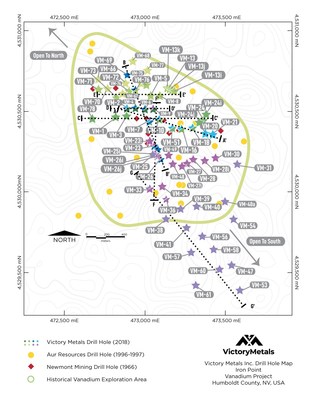 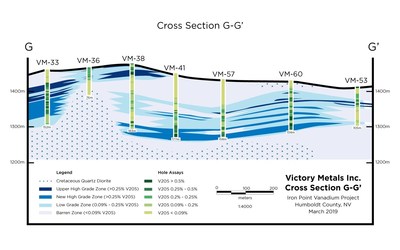 Vanadium results from a number of the currently released drill holes are plotted on a north-south section (see Figure 2, Section G-G') and continue to demonstrate the strong continuity of mineralization in flat lying zones that extend over a large area.

As demonstrated by the previously released drill data, these latest intercepts are consistent with two flat-lying higher grade vanadiferous horizons, referred to as the Upper High Grade and New High Grade Zones, which occur within a broader and extensive envelope of lower grade vanadium mineralization that starts at surface and extends down to a depth of at least 175 meters. Intercepts of this broader envelope include:

Collin Kettell, CEO of Victory, stated, "Today's drill holes mark the completion of the reverse circulation holes from Victory's maiden drilling campaign and results have exceeded our highest expectations. Our initial concept around confirming historical drilling has been greatly enhanced in terms of size of footprint, which now exceeds 1,200 meters north-south, and in terms of the distribution and continuity of vanadium grades".

Assay results for intercepts released today are reported in % V2O5. Intercept lengths are deemed to be true thickness given the flat nature of the mineralized zones being tested by vertical holes. Intercept lengths are reported as an Overall Length, which includes all assay intervals within the vanadium blanket zone (at a 0.09% V2O5 minimum grade), and also as individual zone intercepts reported as aggregate lengths comprised of samples grading 0.25% V2O5 and greater. All intercept lengths have been reduced to true thickness lengths as currently defined by the dip of mineralized horizons shown in Figure 2.

Victory is currently using ALS Chemex in British Columbia to perform umpire assays on 1-in-20 drill pulps obtained from American Assay Laboratories and submitted to the ALS Chemex facility in Reno, NV. ALS Chemex employs a four-acid digestion process (ME-ICP61m method), so Victory is re-numbering the pulp samples and inserting the same field standard samples into the sample stream in order to better compare results between the two labs.

Victory owns a 100% interest in the Iron Point Vanadium Project, located 22 miles east of Winnemucca, Nevada. The project is located within a few miles of Interstate 80, has high voltage electric power lines running through the project area, and a railroad line passing across the northern property boundary. The Company is well financed to advance the project through resource estimation and initial feasibility study work. Victory has a proven capital markets and mining team led by Executive Chairman Paul Matysek. Major shareholders include Casino Gold (50%), and management, directors and founders (25%). Approximately 51% of the Company's issued and outstanding shares are subject to an escrow release over three years.