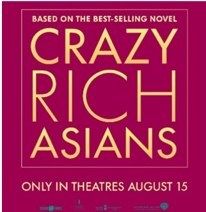 Poutine and film fans packed the restaurant for the exclusive event, as Smolkin led the stars through the creation of their very own #CrazyRichPoutine. The Surf & Turf Poutine masterpiece started with a base of fresh-cut fries, squeaky cheese curds, piping hot gravy and loads of lobster and wagyu steak. The film stars then topped their Crazy Rich dishes with extravagant ingredients such as truffle oil, caviar, shiitake and chanterelle mushrooms, kimchi, garnished with edible gold flakes and edible orchids. A whole lobster and $100 worth of gold flakes were put on a single poutine! The final product resulted in a lavish Poutine worth $448.17.

"You've seen Surf & Turf Poutine before, but we just took it to an INSANE, never-seen-before level with our #CrazyRichPoutine," said Ryan Smolkin, Founder and CEO (Chief Entertainment Officer) of Smoke's Poutinerie. "This was truly a wicked opportunity to team up with the cast of Crazy Rich Asians and entertain our Plaid Nation Fans with the World's Richest Poutine!"

Fans in attendance had the opportunity to sample the elaborate dish and meet the stars of the film before receiving passes to the exclusive red-carpet screening of Crazy Rich Asians later that evening.

About Smoke's PoutinerieFounded in 2009 by creative genius Ryan Smolkin, Smoke's Poutinerie is the World's Largest and Original Poutinerie. Representing 80's Canadiana culture, known for the signature lumberjack plaid, and glam rock music, Smoke's Poutinerie serves over 30 varieties of its famous poutine. With 150-plus locations in Canada, and 50 more open and in development in the United States, the brand is on course for "GLOBAL DOMINATION!"

The story follows New Yorker Rachel Chu (Constance Wu) as she accompanies her longtime boyfriend, Nick Young (Henry Golding), to his best friend's wedding in Singapore. Excited about visiting Asia for the first time but nervous about meeting Nick's family, Rachel is unprepared to learn that Nick has neglected to mention a few key details about his life. It turns out that he is not only the scion of one of the country's wealthiest families but also one of its most sought-after bachelors.

"Crazy Rich Asians" was filmed entirely on location in Singapore and Malaysia. It is set for release on Wednesday, August 15, 2018.