TORONTO, Aug. 29, 2018 /CNW/ - This past weekend the Ultra 94 Porsche GT3 Cup Challenge Canada by Yokohama returned to the Canadian Tire Motorsport Park (CTMP) in Bowmanville, ON, for the final two races of the season. On an overcast Sunday morning – and one day after he clinched Platinum class title – Robichon started from the pole position and led flag-to-flag to capture his 11th Porsche GT3 Cup victory of the 12-race season. 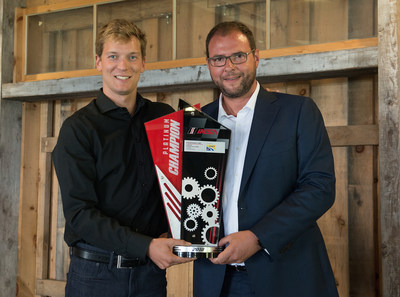 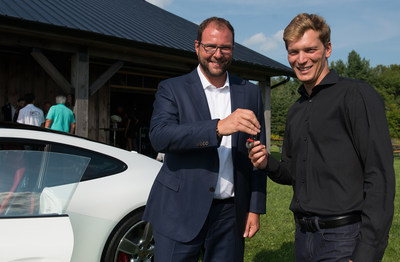 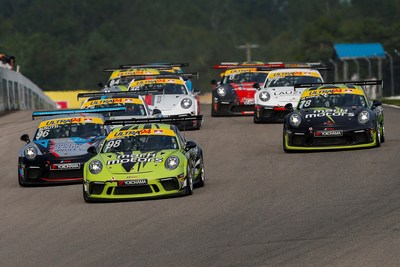 "The eighth season of the Ultra 94 Porsche GT3 Cup Challenge Canada by Yokohama has come to a close showcasing some incredible young talent," said Marc Ouayoun, President & CEO, Porsche Cars Canada, Ltd. "This year, we saw clear devotion from the entire Mark Motors Racing team, with a lead in every race. Congratulations to Zacharie Robichon in the Platinum class, Perry Bortolotti in Platinum Masters, and Michel Bonnet in Gold on their victories in 2018!"

While the weather on Saturday afternoon at Canadian Tire Motorsport Park may have been unpredictable, there was one thing that was nearly certain. Zacharie Robichon, driver of the No. 98 Mark Motors Racing Porsche, entered the final weekend of the 2018 Ultra 94 Porsche GT3 Cup Challenge Canada by Yokohama season leading the championship standings by 38 points. Seeking his 10th win of the season, very little could keep the Ottawa native from his first championship.

The Platinum Masters championship was also determined during Saturday's race, with Martin Harvey in the No. 08 Wingho Racing / Porsche Prestige racecar taking the honours. Harvey finished second in the Platinum Masters class on Saturday – his seventh race of the season –and will go for his first class win during Race 2.

Taking the Gold class victory was Marco Cirone in No.88.

Lastly, the Yokohama Hard Charger Award, given to the driver who gained the most positions during the race, was handed to Max Tullman in the No. 83 Porsche Centre North Toronto / Tullman Walker Racing Porsche.

From start to finish, the final Ultra 94 Porsche GT3 Cup Challenge Canada by Yokohama race of 2018 belonged to series champion Zacharie Robichon. The only race Robichon didn't finish atop the podium this season was Round 5 at Circuit Gilles Villeneuve in Montreal back in June, which saw the victory go to his teammate Roman De Angelis in the No. 78 Porsche. On Sunday, De Angelis took his second runner-up finish of the weekend after starting from the fourth position. The 17-year-old finished with 44 points behind Robichon in the championship standings.

While Sunday's race lead was clear, several other battles provided for some thrilling on-track action for the fans.

Policaro Motorsport / SportsCarBoutique teammates Michael Di Meo in the No. 35 Porsche and Jeff Kingsley in the No. 16 Porsche were within a second of each other for the entirety of the 45-minute race, as Kingsley was eager for Di Meo's third-place position. The latter, however, was able to hold on to third to score his second podium of the year.

Another impressive performance throughout the race was shown by Remo Ruscitti in the No. 96 OpenRoad Racing Porsche. While a first-lap spin took Ruscitti out of contention for the victory, the Vancouver native rebounded from the back of the pack to finish sixth, which he snatched from Stefan Rzadzinski in the No. 8 DFC Motorsport / Speedstar Motorsport Porsche on the last lap.

Taking the Platinum Masters class victory was Perry Bortolotti in the No. 84 Mark Motors Racing Porsche. Bortolotti scored each of the six Platinum Masters victories he contested this season and finished second in the class' championship standings behind Martin Harvey in the No. 08 Wingho Racing / Porsche Prestige racecar, who clinched the title during Saturday's race at CTMP.

Both the Gold class victory and the Yokohama Hard Charger Award for gaining the most positions during the race went to driver Marco Cirone in the No. 18 Porsche, also for Mark Motors Racing. Cirone swept the weekend's Gold class races, bringing his total number of Gold class victories of the year up to four.

Cirone tied Michel Bonnet for the Gold class championship with four wins apiece, yet the tiebreaker was determined by the driver who achieved the highest result first during the season, which was Bonnet at Circuit Gilles Villeneuve back in June. Cirone's first victory came the next race weekend at Honda Indy Toronto.

Drivers and teams celebrated the season finale, receiving championship trophies and other awards during the Porsche GT3 Cup Canada banquet on Sunday afternoon. Porsche Cars Canada, Ltd. presented the Spirit of Speed award, traditionally presented to an individual or group that best represents the true racing spirit of Porsche, to Engineered Automotive driver Michael Fantin, for his perseverance throughout the season. He not only showed development in his driving capabilities, but also overcame several obstacles in order to attain his racing license status to compete this season.

A banquet was held to commemorate the season at the Purple Woods Conservation Area in Oshawa, ON. For the fifth consecutive year the winner of the series was awarded the use of a Porsche 911 for one year. Marc Ouayoun handed the key to a 2018 Porsche 911 Carrera 4S to Zacharie Robichon which he will be able to drive for the next twelve months.

For more information on the Ultra 94 Porsche GT3 Cup Challenge Canada by Yokohama, visit www.imsa.com and follow @IMSA on Twitter with the hashtag #GT3CAN.