TORONTO, March 19, 2018 /CNW/ - The Ultra 94 Porsche GT3 Cup Challenge Canada by Yokohama began this past weekend with races taking place at the historic Sebring International Raceway in Florida for the first time. The two races, held on Thursday, March 15, and Friday, March 16, were in support of the Mobil1 12 Hours of Sebring, where the Porsche GT Team captured the checkered flag in the GT Le Mans (GTLM) class with a 911 RSR. 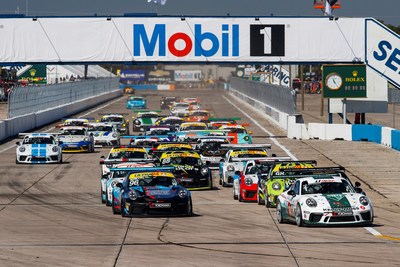 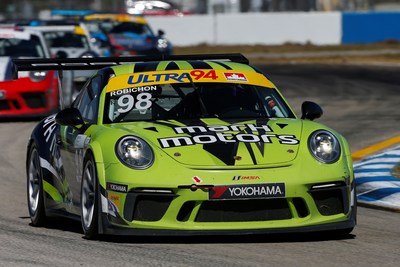 "Both Ultra 94 Porsche GT3 Cup Challenge Canada by Yokohama races in Sebring, FL, provided a glimpse at just how competitive the series will be this year," said Marc Ouayoun, President & CEO, Porsche Cars Canada, Ltd. "Exciting position and lead changes happening throughout each race is a clear indication of the driver talent that we have on the grid."

Race 1: Robichon scores last-lap victoryLast year's Ultra 94 Porsche GT3 Cup Challenge Canada by Yokohama Platinum Cup championship runner-up, Zach Robichon, got his efforts to improve one more position this season off to a successful start on the afternoon of Thursday, March 15, at Sebring International Raceway, with a last-lap victory in the 45-minute race.

"It was a really fun race," Robichon said, "he left the door open just a little bit in 16, so I went to the inside, got up alongside him. It was an aggressive move, but I was pretty happy with the way it turned out. It was fun racing with the guys up front."

Finishing third in GT3 Cup Challenge Canada Platinum Cup was Remo Ruscitti in the No. 96 OpenRoad Racing entry. In Platinum Cup Masters, Marco Cirone took the victory in the No. 88 Mark Motors Porsche.

While Robichon consistently ran in the top five throughout the 45-minute race in his No. 98 Mark Motors Porsche 911 GT3 Cup car, he was never able to get past the revolving 1-2 combination of Roman De Angelis and the overall winner in the first race the day before, Trenton Estep, from the Porsche GT3 Cup USA series.

That is, until the last lap.

Heading into the final and iconic Turn 17, De Angelis in the No. 1 Kelly Moss Road and Race Porsche battled alongside Estep in the No. 3 JDX Racing Porsche heading to the checkered flag. The two cars made contact and spun, opening the door for Robichon to sneak past for the overall and GT3 Cup Challenge Canada victory ahead of second-place in the Canadian Platinum Cup class, Nelson Mason in the No. 35 Policaro Motorsport/SportsCarBoutique machine.

Rounding out the podium was Marco Cirone, driver of the No. 88 Mark Motors Racing Porsche 911 GT3 Cup car, who also added his second Porsche GT3 Cup Canada Masters class win of the weekend to his resume. He snuck into the third position as a result of De Angelis' and Estep's collision after running throughout the top ten all race.

The Ultra 94 Porsche GT3 Cup Challenge Canada by Yokohama returns for Rounds 3 and 4 on May 19-20, as part of the Victoria Day Speedfest Weekend at Canadian Tire Motorsport Park in Bowmanville, Ontario.