TORONTO, Jan. 30, 2018 /CNW/ - U3O8 Corp. (TSX: UWE), (OTCQB: UWEFF) ("U3O8 Corp." or the "Company") reports that a trial has commenced to test the effectiveness of geophysics to detect channels at the base of the gravel layer at its Laguna Salada Deposit ("Deposit" or "Property") in Argentina.  Exploration elsewhere on the Property has shown that channels contain higher-grade uranium-vanadium mineralization that could further improve the positive economics of the Deposit. 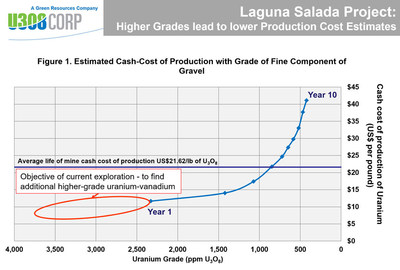 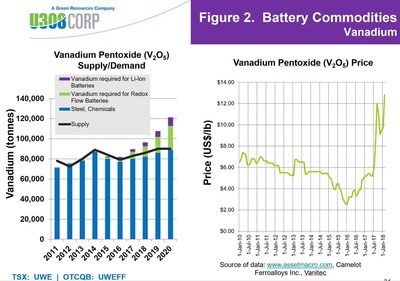 Geophysics ProgramThe NI43-101 resource at Laguna Salada was based principally on a one-metre thick layer of uranium-vanadium bearing gravel that extends from surface to a maximum depth of only three metres.  Exploration that was completed following the resource estimate, revealed a second layer in which uranium and vanadium are confined to channels at the base of the gravel.  The second layer contains generally higher uranium-vanadium grades that may result in the estimated cash-cost of production being even lower than for the near-surface material on which the preliminary economic assessment ("PEA") was based (Figure 1).

Trials are underway to determine the effectiveness of Electrical Resistivity to detect these buried channels.  The test work is being done in an area within the Laguna Salada Deposit where drilling detected channels that contain higher-grade mineralization.  The test work is expected to be completed in mid-February, and if successful, a more extensive geophysical program will be considered to provide specific targets for exploration by pitting with an excavator.

Update on Proof of Concept WorkHaving studied the test work on which the PEA was based, and after spending three weeks in Argentina, Mr. John Rae has selected and ordered the equipment required to separate the fine-grained uranium-vanadium from the pebbles in Laguna Salada gravel.  John Rae is a mining engineer who has 40 years of experience in the extraction of various commodities from gravel.  The proof of concept test work will continue through the first quarter of 2018 and results will be reported as they become available.

Russian Uranium Producer to Explore in Chubut ProvinceA Russian State-owned uranium production company has announced that it plans to spend up to US$250 million in exploration for, and development of, uranium deposits that are amenable to in situ leach extraction in Chubut Province in southern Argentina.  U3O8 Corp. holds approximately 40,000 square kilometres (approximately 15,000 square miles) of exploration concessions in the area that is being targeted for this type of sandstone-hosted mineralization that typically lies at approximately 100-150 metres depth in the target area.

Despite the potential of the sandstone-hosted mineralization, U3O8 Corp. prioritized exploration at Laguna Salada where resource definition in the shallow-lying mineralization can be done more cost-effectively.  In addition, Laguna Salada – style mineralization contains vanadium – a fundamentally important by-product both in terms of strengthening the economics of the Deposit, and in providing a key commodity for construction steel and for industrial-scale vanadium redox batteries.  The vanadium price has risen strongly over the last past year in response to a shortage of supply in the international vanadium market (Figure 2).

Technical Information & Cautionary NoteA PEA is preliminary in nature and includes inferred mineral resources that are considered too speculative geologically to have the economic considerations applied to them that would enable them to be categorized as mineral reserves, and there is no certainty that the results of the PEA assessment will be realized.

Dr. Richard Spencer, P.Geo., CGeol., President and CEO of U3O8 Corp. and a Qualified Person as defined by National Instrument 43-101, has approved the technical information in this news release relating to the Laguna Salada Deposit and the related PEA.

U3O8 Corp. is focused on exploration and development of deposits of uranium and battery commodities in South America.  Battery commodities that occur with uranium resources include vanadium, nickel, zinc and phosphate.  The Company's mineral resources estimates were made in accordance with National Instrument 43-101, and are contained in three deposits:

Further details on U3O8 Corp.'s Laguna Salada Deposit and Argentina's electricity generation from large nuclear reactors, as well as its prototype small modular reactor that represents a prime export opportunity, are available in the Company's Corporate Presentation accessible on the homepage of our website http://www.u3o8corp.com.

Forward-Looking StatementsThis news release includes certain "forward looking statements" related with the development plans, economic potential and growth targets of U3O8 Corp's projects. Forward-looking statements consist of statements that are not purely historical, including statements regarding beliefs, plans, expectations or intensions for the future, and include, but not limited to, statements with respect to: (a) the low-cost and near-term development of Laguna Salada, (b) the Laguna Salada and Berlin PEAs, (c) the potential of the Kurupung district in Guyana, (d) impact of the U- pgradeTM process on expected capital and operating expenditures, and (e) the price and market for uranium. These statements are based on assumptions, including that: (i) actual results of our exploration, resource goals, metallurgical testing, economic studies and development activities will continue to be positive and proceed as planned, and assumptions in the Laguna Salada and Berlin PEAs prove to be accurate, (ii) a joint venture will be formed with the provincial petroleum and mining company on the Argentina project, (iii) requisite regulatory and governmental approvals will be received on a timely basis on terms acceptable to U3O8 Corp., (iv) economic, political and industry market conditions will be favourable, and (v) financial markets and the market for uranium  will improve for junior resource companies in the short-term. Such statements are subject to risks and uncertainties that may cause actual results, performance or developments to differ materially from those contained in such statements, including, but not limited to: (1) changes in general economic and financial market conditions, (2) changes in demand and prices for minerals, (3) the Company's ability to establish appropriate joint venture partnerships, (4) litigation, regulatory, and legislative developments, dependence on regulatory approvals, and changes in environmental compliance requirements, community support and the political and economic climate, (5) the inherent uncertainties and speculative nature associated with exploration results, resource estimates, potential resource growth, future metallurgical test results, changes in project parameters as plans evolve, (6) competitive developments, (7) availability of future financing, (8) exploration risks, and other factors beyond the control of U3O8 Corp. including those  factors set out in the "Risk Factors" in our Annual Information Form available on SEDAR at www.sedar.com. Readers are cautioned that the assumptions used in the preparation of such information, although considered reasonable at the time of preparation, may prove to be imprecise and, as such, undue reliance should not be placed on forward-looking statements. U3O8 Corp. assumes no obligation to update such information, except as may be required by law. For more information on the above-noted PEAs, refer to the September 18, 2014 technical report titled "Preliminary Economic Assessment of the Laguna Salada Uranium-Vanadium Deposit, Chubut Province, Argentina" and the January 18, 2013 technical report titled "U3O8 Corp. Preliminary Economic Assessment on the Berlin Deposit, Colombia."