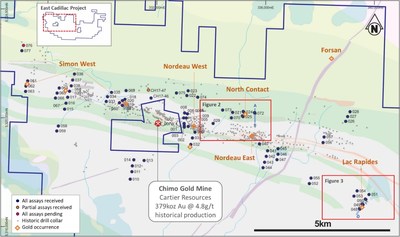 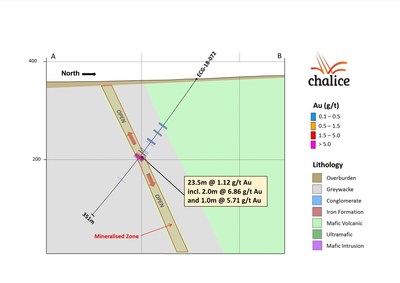 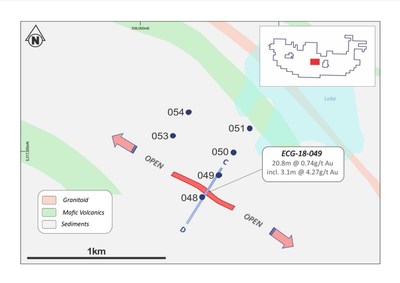 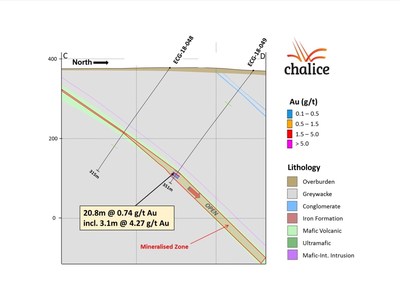 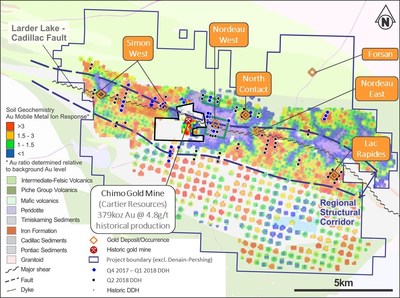 The new drill intercepts have been confirmed following the receipt of a number of new assay results from the recently completed 27,300m regional diamond drilling program. The intercepts at the North Contact and Lac Rapides targets significantly expand the potential of the project to the north and south-east beyond the known Cadillac fault-hosted mineralisation. The lateral extent and thickness of the gold intercepts is considered encouraging and suggests potential for large scale mineralising systems in the area.

The new mineralised zones add to the previously announced discoveries at Simon West, which has now expanded the historical Cadillac fault-hosted mineralisation at Simon West to approximately 3.5km along strike.

The latest assay results have confirmed the presence of significant gold mineralisation at the North Contact and Lac Rapides zones, along with further encouraging intersections at Simon West.

The latest significant intercepts are listed in Table 1, with assays from two holes still awaited (full listing of intersections can be found in Appendix 1 - Note: True width values are not known at this time).

Note: True width values are not known at this time

The North Contact was a conceptual target that interpreted the presence of a mineralised fault along the contact between the basement volcanics and overlying Cadillac sediments, sub-parallel to and approximately 800m north of, the Cadillac fault.

A series of drill fences were completed targeting an area of gold anomalism in MMI soil samples coincident with a moderate to strong IP chargeability response. Results to date have defined a well-developed mineralised fault that extends over a strike length of >1km and remains open in all directions (Figure 2).

Results have been received for all drill holes along the North Contact zone and hole ECG-18-72 intersected a broad zone of gold mineralisation: 23.5m at 1.12g/t Au from 180.5m, including a high grade interval of 2.0m at 6.86g/t Au.

The thickness of the mineralised intercept is particularly encouraging, as it is indicative of a potentially robust mineralised system. Importantly, the mineralised zone is interpreted to extend near to surface and remains untested up-dip (Figure 3).

Two drill traverses completed at the Lac Rapides target tested a zone of anomalous gold plus pathfinder elements (W, Bi, As) on the east end of the property approximately 500m south of the Cadillac fault (Figure 4).

Results have been received for the eastern traverse, drill holes 48 to 51, with hole ECG-18-49 intersecting a broad zone of low grade mineralisation: 20.8m at 0.74 g/t Au from 316.7m, including a high grade interval of 3.1m at 4.27 g/t Au from 323.1m, however it is the thickness of the mineralised zone that is most encouraging. Importantly, the mineralised zone remains open along strike and at depth (Figure 5).

The target is the first test of several high priority geochemical anomalies delineated south of the Cadillac fault with strong gold plus pathfinder element responses (Figure 6). Infill sampling is planned over these areas to refine targets for follow-up testing.

The Company is currently updating its geological database and refining its structural interpretation based on the results received to date. A summer field program is also being finalised, which will include in-fill and new regional MMI soil geochemistry and additional geophysical surveys. The program is expected to commence in July 2018.

Chalice's Chief Executive Officer Alex Dorsch said: "We are excited by these two new gold intercepts at East Cadillac which follow on from the success earlier in the drill program at Simon West and Nordeau West. The first year's field program continues to demonstrate the prospectivity of the project and the new discoveries confirm that Chalice's ground consolidation and regional exploration strategy has been effective."

"We have now demonstrated the potential of this district-scale project to host several new gold discoveries and, when you consider its proximity to several globally significant gold mines, we are looking forward to more encouraging results as our exploration programs gather momentum."

The East Cadillac Gold Project ("ECG Project") covers an area of 245km2 and is located ~35km east of the >20Moz Val-d'Or gold camp in Quebec, Canada. With land holdings encompassing a strike length of 27km of the Larder Lake-Cadillac Fault, the most prolifically endowed gold trend in the southern Abitibi, the Project is situated amongst some of the region's most significant mines, and surrounds the historical Chimo gold mine, owned by Cartier Resources (TSX: ECR). The Project is a consolidation of several earn-in option agreements (Chalice earning 70 to 100%) and Chalice's 100%-owned claims.

The information in this news release that relates to Exploration Results in relation to the Company's Projects is based on information compiled by Dr. Kevin Frost BSc (Hons), PhD, who is a Member of the Australian Institute of Geoscientists. Dr. Frost is a full-time employee of the company and has sufficient experience in the field of activity being reported to qualify as a Competent Person as defined in the 2012 edition of the Australasian Code for Reporting of Exploration Results, Minerals Resources and Ore Reserves, and is a Qualified Person under National Instrument 43-101 – 'Standards of Disclosure for Mineral Projects'. The Qualified Person has verified the data disclosed in this release, including sampling, analytical and test data underlying the information contained in this release. Dr. Frost consents to the release of information in the form and context in which it appears here.

Forward-looking statements relate to future events or future performance and reflect Company management's expectations or beliefs regarding future events and include, but are not limited to, the estimation of mineral reserve and mineral resources, the realisation of mineral reserve estimates, the likelihood of exploration success at the Company's projects, the timing and amount of estimated future production, costs of production, capital expenditures, success of mining operations, environmental risks, unanticipated reclamation expenses, title disputes or claims and limitations on insurance coverage.

In certain cases, forward-looking statements can be identified by the use of words such as "plans", "expects" or "does not expect", "is expected", "will", "may", "would", "budget", "scheduled", "estimates", "forecasts", "intends", "anticipates" or "does not anticipate", "believes" or variations of such words and phrases or statements that certain actions, events or results may, could, would, might or will be taken, occur or be achieved or the negative of these terms or comparable terminology. By their very nature forward-looking statements involve known and unknown risks, uncertainties and other factors which may cause the actual results, performance or achievements of the Company to be materially different from any future results, performance or achievements expressed or implied by the forward-looking statements.

Such factors may include, among others, risks related to actual results of current or planned exploration activities; changes in project parameters as plans continue to be refined; future prices of mineral resources; possible variations in mineral resources or ore reserves, grade or recovery rates; accidents, labour disputes and other risks of the mining industry; delays in obtaining governmental approvals or financing or in the completion of development or construction activities; as well as those factors detailed from time to time in the Company's interim and annual financial statements, all of which are filed and available for review on SEDAR at sedar.com.