VANCOUVER, Dec. 13, 2018 /CNW/ - Trilogy Metals Inc. (TSX/NYSE American: TMQ) ("Trilogy Metals" or the "Company") is pleased to announce the third, and final, set of copper and cobalt assay results for five holes from the 2018 summer exploration diamond drilling program at the Bornite Project, a part of the Company's Upper Kobuk Mineral Projects ("UKMP") located in the Ambler Mining District of Northwest Alaska.  Assay results from these five holes comprise approximately 3,024 meters from the 10,123-meter drill campaign.  All five of the drill holes contain significant copper mineralization and were designed as infill and extension holes to the 300 to 400 meter step-out holes drilled by the Company's previous round of drilling completed in 2017. 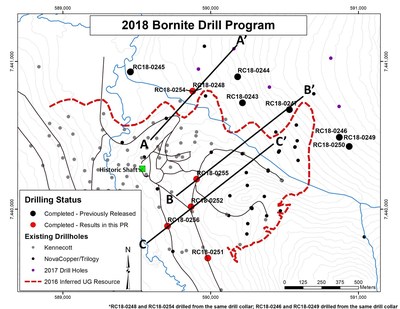 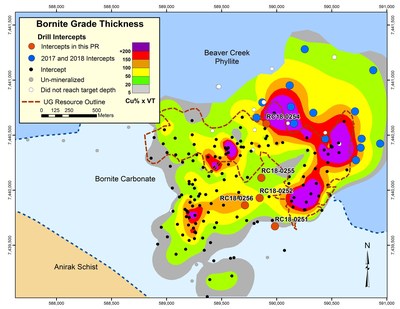 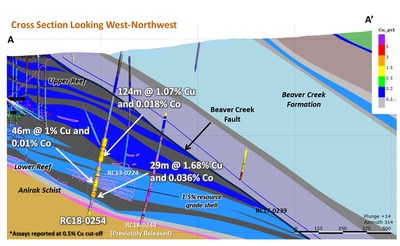 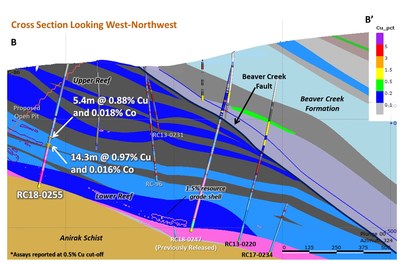 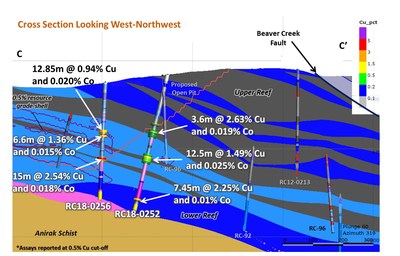 At a cutoff grade of 0.5% copper the results are as follows:

Rick Van Nieuwenhuyse, President and CEO of Trilogy Metals commented, "The latest drilling results confirm the extent and continuity of the copper and cobalt mineralized system at the Bornite Project, and continue to demonstrate that the system is open. The results from drill hole RC18-0254 show additional thick zones of continuous copper-cobalt mineralization which is what was seen in RC13-0224, which contains 236.0 meters of 1.90% copper, including 6.6 meters of 7.70% copper (please see the press release dated October 7, 2013). Hole RC18-0254 is approximately 150 meters to the southwest of RC13-0224. Within the central part of the Bornite deposit, drill holes RC18-0252, RC18-0255 and RC18-0256 partially in-fill the doughnut hole – an area previously undrilled as seen in figure 2. These three drill holes extend the mineralized envelope towards the surface - potentially expanding the open pit resource. The results from RC18-0251 extend the South Reef Zone up-dip to the south – albeit at lower grades but the mineralized system remains open up-dip towards the surface.  Overall, all four of these holes (RC18-0251, RC18-0252, RC18-0255 and RC18-0256) show that the South Reef mineralization is open up dip and joins with the Main Lower Reef mineralization that makes up the open pit resource."

This year's program was comprised of 12 drill holes totaling approximately 10,123 meters through a combination of infill and expansion drill holes in and around the known deposit. The original drilling campaign was budgeted to be 8,000 meters but was subsequently expanded to 10,000 meters with the addition of two more drill rigs. The 2018 program followed up on drilling completed during the 2017 exploration program, which was one of the larger programs in the history of drilling at the Bornite Project. During 2017, the Company drilled nine diamond drill holes comprising 8,437 meters to test the extension of the of the currently defined resource†.

The objective of the 2018 drill campaign is to infill and expand the currently defined open pit and underground mineral resources.

Mineralization within the Bornite deposit occurs as a series of "Reefs" hosted by both the Upper and Lower Bornite Carbonate sequences separated by generally unmineralized phyllite units. The Cu-Co mineralization at Bornite occurs in three distinct carbonate zones, the Upper Reef, the Lower Reef, and the South Reef.  All three zones were drill tested this year.

The resource estimate utilized assay data from drill holes completed by the Company between 2011 and 2013 and re-sampled historic holes Kennecott drilled in the 1960s and 1970s. Assays from historic Kennecott holes that were not re-sampled were also used in the resource estimation. On June 5th, 2018 the Company announced an updated resource estimate for the Bornite project of 5.5 billion pounds of copper inferred resource at a grade of 1.74% Cu and 913 million pounds of copper indicated resource at a grade of 1.02% Cu and total inferred cobalt resources (in-pit and below-pit) of 182.4 million tonnes grading 0.019% Co for 77 million pounds of contained cobalt. Trilogy Metals filed a National Instrument 43-101 technical report in July 2018.  See the Bornite Technical Report as well as the Company's press releases dated June 5, 2018 (https://Trilogy PR June 5 2018) and the Company's press release on the filing of the updated NI43-101 Technical Report for Bornite on July 20, 2018 (https://Trilogy PR July 20 2018).

The drill program, sampling protocol and data verification were managed by qualified persons employed by the Company. Diamond drill holes were typically collared at PQ or HQ diameter drill core and reduced to HQ and NQ diameter during the drilling process. Samples were collected using a 0.2-meter minimum length, 2.5-meter maximum length and 1.9-meter average sample length. Drill core recovery averaged 93% overall and 95% within the prospective lithologies. Three quality control samples (one blank, one standard and one duplicate) were inserted into each batch of 20 samples. The drill core was sawn, with half sent to ALS Minerals in Fairbanks for sample preparation and the sample pulps forwarded to ALS's North Vancouver facility for analysis. ALS Minerals in North Vancouver, B.C., Canada, is a facility certified as ISO 9001:2008 and accredited to ISO / IEC 17025:2005 from the Standards Council of Canada. The Company will submit 5% of the assay intervals from prospective lithologies to an independent check assay lab.

Trilogy Metals Inc. is a metals exploration and development company focused on exploring and developing the Ambler mining district located in northwestern Alaska. It is one of the richest and most-prospective known copper-dominant districts located in one of the safest geopolitical jurisdictions in the world. It hosts world-class polymetallic volcanogenic massive sulphide ("VMS") deposits that contain copper, zinc, lead, gold and silver, and carbonate replacement deposits which have been found to host high-grade copper and cobalt mineralization. Exploration efforts have been focused on two deposits in the Ambler mining district - the Arctic VMS deposit and the Bornite carbonate replacement deposit. Both deposits are located within the Company's land package that spans approximately 143,000 hectares. The Company has an agreement with NANA Regional Corporation, Inc., a Regional Alaska Native Corporation that provides a framework for the exploration and potential development of the Ambler mining district in cooperation with local communities. Our vision is to develop the Ambler mining district into a premier North American copper producer.

This press release includes certain "forward-looking information" and "forward-looking statements" (collectively "forward-looking statements") within the meaning of applicable Canadian and United States securities legislation including the United States Private Securities Litigation Reform Act of 1995. All statements, other than statements of historical fact, included herein, including, without limitation, further drilling activity, the potential advancement of the AMDIAP, the UKMP and mining generally in Alaska, the timing and the filing of updated reports on the Company's projects, the future price of copper, the estimation of mineral reserves and mineral resources, the realization of mineral reserve and mineral resource estimates, the timing and amount of estimated future production, costs of production, capital expenditures, costs and timing of the development of projects, the likelihood and timing of the AMDIAP, the potential future development of Bornite, the future operating or financial performance of the Company, planned expenditures and the anticipated activity at the UKMP Projects, are forward-looking statements. The assay results from the drill holes discussed in this press release should not be considered representative of other drilling results for the 2018 drilling campaign. Forward-looking statements are frequently, but not always, identified by words such as "expects", "anticipates", "believes", "intends", "estimates", "potential", "possible", and similar expressions, or statements that events, conditions, or results "will", "may", "could", or "should" occur or be achieved. These forward-looking statements may include statements regarding perceived merit of properties; exploration plans and budgets; mineral reserves and resource estimates; work programs; capital expenditures; timelines; strategic plans; market prices for precious and base metals; or other statements that are not statements of fact. Forward-looking statements involve various risks and uncertainties. There can be no assurance that such statements will prove to be accurate, and actual results and future events could differ materially from those anticipated in such statements. Important factors that could cause actual results to differ materially from the Company's expectations include the uncertainties involving success of exploration, development and mining activities, permitting timelines, requirements for additional capital, government regulation of mining operations, environmental risks, unanticipated reclamation expenses; mineral reserve and resource estimates and the assumptions upon which they are based; assumptions and discount rates being appropriately applied to the PFS; our assumptions with respect to the likelihood and timing of the AMDIAP; capital estimates; prices for energy inputs, labour, materials, supplies and services the interpretation of drill results, the need for additional financing to explore and develop properties and availability of financing in the debt and capital markets; uncertainties involved in the interpretation of drilling results and geological tests and the estimation of reserves and resources; the need for cooperation of government agencies and native groups in the development and operation of properties as well as the construction of the access road; the need to obtain permits and governmental approvals; risks of construction and mining projects such as accidents, equipment breakdowns, bad weather, non-compliance with environmental and permit requirements, unanticipated variation in geological structures, metal grades or recovery rates; unexpected cost increases, which could include significant increases in estimated capital and operating costs; fluctuations in metal prices and currency exchange rates; and other risks and uncertainties disclosed in the Company's Annual Report on Form 10-K for the year ended November 30, 2017 filed with Canadian securities regulatory authorities and with the United States Securities and Exchange Commission and in other Company reports and documents filed with applicable securities regulatory authorities from time to time. The Company's forward-looking statements reflect the beliefs, opinions and projections on the date the statements are made. The Company assumes no obligation to update the forward-looking statements or beliefs, opinions, projections, or other factors, should they change, except as required by law.

This press release has been prepared in accordance with the requirements of the securities laws in effect in Canada, which differ from the requirements of U.S. securities laws. Unless otherwise indicated, all resource and reserve estimates included in this press release have been prepared in accordance with Canadian National Instrument 43-101 Standards of Disclosure for Mineral Projects ("NI 43-101") and the Canadian Institute of Mining, Metallurgy and Petroleum (CIM)—CIM Definition Standards on Mineral Resources and Mineral Reserves, adopted by the CIM Council, as amended ("CIM Definition Standards"). NI 43-101 is a rule developed by the Canadian Securities Administrators which establishes standards for all public disclosure an issuer makes of scientific and technical information concerning mineral projects. Canadian standards, including NI 43-101, differ significantly from the requirements of the United States Securities and Exchange Commission (SEC), and resource and reserve information contained herein may not be comparable to similar information disclosed by U.S. companies. In particular, and without limiting the generality of the foregoing, the term "resource" does not equate to the term "reserves". Under U.S. standards, mineralization may not be classified as a "reserve" unless the determination has been made that the mineralization could be economically and legally produced or extracted at the time the reserve determination is made. The SEC's disclosure standards normally do not permit the inclusion of information concerning "measured mineral resources", "indicated mineral resources" or "inferred mineral resources" or other descriptions of the amount of mineralization in mineral deposits that do not constitute "reserves" by U.S. standards in documents filed with the SEC. Investors are cautioned not to assume that all or any part of "measured" or "indicated resources" will ever be converted into "reserves". Investors should also understand that "inferred mineral resources" have a great amount of uncertainty as to their existence and great uncertainty as to their economic and legal feasibility. Under Canadian rules, estimated "inferred mineral resources" may not form the basis of feasibility or pre-feasibility studies except in rare cases. Disclosure of "contained ounces" in a resource is permitted disclosure under Canadian regulations; however, the SEC normally only permits issuers to report mineralization that does not constitute "reserves" by SEC standards as in-place tonnage and grade without reference to unit measures. The requirements of NI 43-101 for identification of "reserves" are also not the same as those of the SEC, and reserves reported by Trilogy Metals in compliance with NI 43-101 may not qualify as "reserves" under SEC standards. Arctic does not have known reserves, as defined under SEC Industry Guide 7.  Accordingly, information concerning mineral deposits set forth herein may not be comparable with information made public by companies that report in accordance with U.S. standards.