VANCOUVER, Sept. 10, 2019 /CNW/ - Trilogy Metals Inc. (TSX/NYSE American: TMQ) ("Trilogy Metals" or the "Company") is pleased to announce the first set of  assay results from this summer's exploration diamond drilling program at the Bornite Project and the Sunshine prospect, which are part of the Company's Upper Kobuk Mineral Projects ("UKMP") located in the Ambler mining district of Northwest Alaska.  All amounts are in USD. 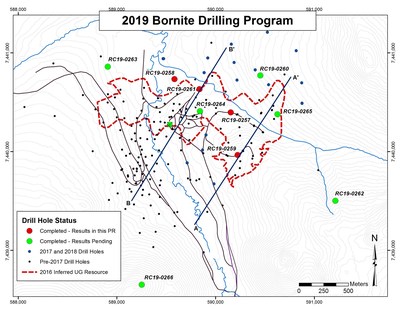 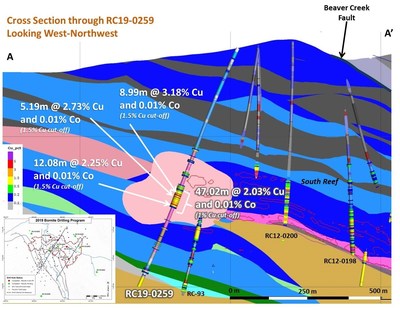 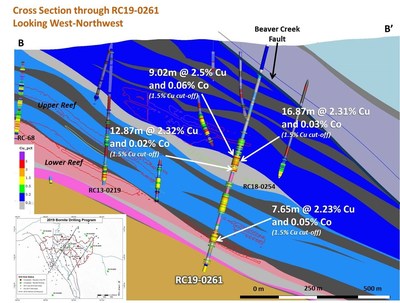 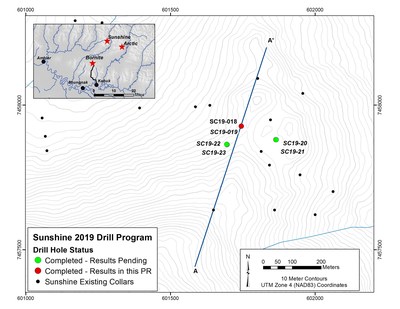 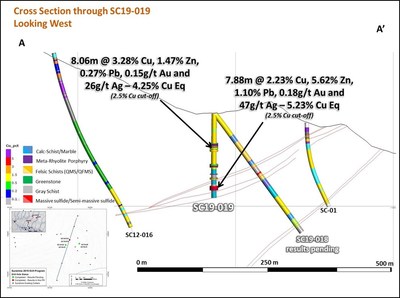 Based on the VTEM geophysical survey that we completed this past spring over the Ambler volcanogenic massive sulphide ("VMS") belt and from historical drilling, the most recent drilling targeted the Sunshine prospect, which is approximately eight miles (13 kilometers) from the Arctic Project.  The assay results reported below for one drill hole from the Sunshine prospect comprises 161 meters of the 1,356-meter six-hole drill campaign at this prospect.  Results from the other five holes at Sunshine are pending and will be released later in the year.

The four Bornite drill holes reported below comprise approximately 3,014 meters from the recently completed 7,610-meter drill campaign. All four drill holes contain copper mineralization and were designed as either infill drill holes to the 300 to 400-meter step-out holes completed in 2017 and 2018 or in the case of RC19-0258 to step-out 150 meters to the northwest of the existing mineral resource.

At a cutoff grade of 1.5% copper equivalent* the results from zones 1-4 and a newly discovered zone from the Sunshine prospect are as follows:

At a cutoff grade of 0.5% copper the results from the Bornite Project are as follows:

James Gowans, Interim President and CEO of Trilogy Metals commented, "The four mineralized holes from Bornite show that the Cu-mineralization is continuous throughout the Upper and Lower Reefs.  However, we are excited with the results from our recently completed regional exploration program where we have intersected VMS polymetallic mineralization at Sunshine with grades and thicknesses comparable to Arctic.  Of particular excitement is the discovery of a new horizon that lies above known sulphide horizons."

The 2019 drilling budget of $9.2 million for Bornite this year was funded entirely by South32 Limited (ASX, LSE, JSE: S32; ADR: SOUHY) ("South32") and represents the third and final payment under the Company's option agreement (as amended, the "Option Agreement") with South32 and maintains the Option Agreement in good standing.

In addition, the Company and South32 funded an additional $2 million for district exploration focused on identifying and testing new drill targets within the Ambler VMS Belt. The Company contributed $1 million to the UKMP regional program and South32 contributed the remaining $1 million. The regional drilling focused on the Sunshine deposit, which is located approximately 8 miles (13 kilometers) from the Arctic Project and 13 miles (21 kilometers) from the Bornite Project. For more information on the Option Agreement see the Company's press release on April 10, 2017 (https://Trilogy PR April 10 2017).

This year's program at Bornite was comprised of 10 drill holes totaling approximately 7,610 meters through a combination of infill and expansion drill holes in and around the known resource.

Trilogy Metals has recently completed its summer exploration drilling program at Bornite and Sunshine and geotechnical activities at its Arctic Project. Additional drill results are anticipated to be released regularly over the next couple of months as they become available.

Mineralization within the Bornite deposit occurs as a series of "Reefs" hosted by both the Upper and Lower Bornite Carbonate sequences separated by generally unmineralized phyllite units. The Cu-Co mineralization at Bornite occurs in three distinct carbonate zones, the Upper Reef, the Lower Reef, and the South Reef.  All three zones were drill tested this year.

At Sunshine, which is located approximately eight miles (13 kilometers) from the Arctic Project, the Company drilled six holes comprising 1,357 meters.

The Sunshine prospect lies within a north-facing alpine cirque west of the Shungnak River and just south of the eastward flowing Sunshine Creek.  The Ambler VMS-style mineralization was discovered by Bear Creek Mining Company (BCMC) in 1969 and is exposed on an east trending ridge.  The rock units exposed are typical of the Ambler Schist sequence that hosts the Arctic deposit and include quartz +/- feldspar and chlorite schist, graphitic and quartz graphitic schist, marble, and calcareous schist.  Massive and semi-massive sulphide mineralization, consisting of chalcopyrite, sphalerite, galena, and tetrahedrite/tennantite, occurs in 0.1 meter to 8-meter bands generally at a contact between graphitic and calcareous schist.  Three mineralized horizons, each consisting of two sulphide layers, are limbs of recumbent synformal and antiformal closures with the antiformal fold nose eroded away to the northeast and the fold opening to the southwest.  The new horizon listed in Tables 4 and 5 and displayed in Figure 4 may represent a structurally higher fourth recumbent fold limb.

Results for Sunshine are presented in Table 4 at a cutoff grade of 1.5% copper equivalent.  All the intersected widths are close to normal to stratigraphy and therefore can be considered to be true widths. Results at a more selective higher-grade cutoff of 2.5% copper equivalent are also presented in Table 5 to show locally higher-grade intervals.  Table 6 shows the drill hole location.  Figure 4 shows the location of the drill holes on a plan map and Figure 5 shows a cross-section through drill hole SC19-019. Of note is the discovery of a new zone of high-grade polymetallic mineralization within SC19-019.

The drill program, sampling protocol, and data verification were managed by qualified persons employed by the Company. Diamond drill holes were typically collared at PQ (internal diameter of 85 millimeters) and reduced to HQ (internal diameter of 63.5 millimeters) during the drilling process for the Bornite holes and collared and drilled to depth HQ for the Sunshine holes.  Samples were collected using a 0.2-metre minimum length, a 2.5-metre maximum length and a 1.9-metre average sample length for Bornite and a 1.5-metre average sample length for Sunshine. Drill core recovery averaged 93% for Bornite drill core and 96% for Sunshine core. Three quality control samples (one blank, one standard and one duplicate) were inserted into each batch of 20 samples. The drill core was sawn, with half sent to ALS Minerals in Fairbanks for sample preparation and the sample pulps forwarded to ALS's North Vancouver facility for analysis. ALS Minerals in North Vancouver, B.C., Canada, is an independent facility certified as ISO 9001:2008 and accredited to ISO / IEC 17025:2005 from the Standards Council of Canada. The Company will submit 5% of the assay intervals from prospective lithologies to an independent check assay lab.

Trilogy Metals Inc. is a metals exploration and development company focused on exploring and developing the Ambler mining district located in northwestern Alaska. It is one of the richest and most-prospective known copper-dominant districts located in one of the safest geopolitical jurisdictions in the world. It hosts world-class polymetallic VMS deposits that contain copper, zinc, lead, gold and silver, and carbonate replacement deposits which have been found to host high-grade copper and cobalt mineralization. Exploration efforts have been focused on two deposits in the Ambler mining district - the Arctic VMS deposit and the Bornite carbonate replacement deposit. Both deposits are located within the Company's land package that spans approximately 143,000 hectares. The Company has an agreement with NANA Regional Corporation, Inc., a Regional Alaska Native Corporation that provides a framework for the exploration and potential development of the Ambler mining district in cooperation with local communities. Our vision is to develop the Ambler mining district into a premier North American copper producer.

This press release includes certain "forward-looking information" and "forward-looking statements" (collectively "forward-looking statements") within the meaning of applicable Canadian and United States securities legislation including the United States Private Securities Litigation Reform Act of 1995. All statements, other than statements of historical fact, included herein, including, without limitation, further drilling activity and the results thereof, and the anticipated activity at the UKMP Projects, are forward-looking statements. The assay results disclosed in this press release should not be considered representative of other drilling results for the 2019 drilling campaign. Forward-looking statements are frequently, but not always, identified by words such as "expects", "anticipates", "believes", "intends", "estimates", "potential", "possible", and similar expressions, or statements that events, conditions, or results "will", "may", "could", or "should" occur or be achieved. Forward-looking statements involve various risks and uncertainties. There can be no assurance that such statements will prove to be accurate, and actual results and future events could differ materially from those anticipated in such statements. Important factors that could cause actual results to differ materially from the Company's expectations include the uncertainties involving success of exploration, permitting timelines, requirements for additional capital, government regulation of mining operations, environmental risks, unanticipated reclamation expenses, supplies and services the interpretation of drill results, the need for additional financing to explore and develop properties and availability of financing in the debt and capital markets; uncertainties involved in the interpretation of drilling results and geological tests; the need for cooperation of government agencies and native groups in the development and operation of properties; the need to obtain permits and governmental approvals; unanticipated variation in geological structures, metal grades or recovery rates; unexpected cost increases, which could include significant increases in estimated capital and operating costs; fluctuations in metal prices and currency exchange rates; and other risks and uncertainties disclosed in the Company's Annual Report on Form 10-K for the year ended November 30, 2018 filed with Canadian securities regulatory authorities and with the United States Securities and Exchange Commission and in other Company reports and documents filed with applicable securities regulatory authorities from time to time. The Company's forward-looking statements reflect the beliefs, opinions and projections on the date the statements are made. The Company assumes no obligation to update the forward-looking statements or beliefs, opinions, projections, or other factors, should they change, except as required by law.