VANCOUVER, Feb. 6, 2019 /CNW/ - Trilogy Metals Inc. (TSX/NYSE American: TMQ) ("Trilogy Metals", "Trilogy" or the "Company") is pleased to announce a new regional exploration budget of $2 million that is in addition to the previously announced 2019 programs and budgets of $16.2 million, increasing the exploration budget at the Company's Upper Kobuk Mineral Projects ("UKMP") located in the Ambler Mining District of Northwest Alaska for 2019 to $18.2 million.  All amounts are in US dollars. 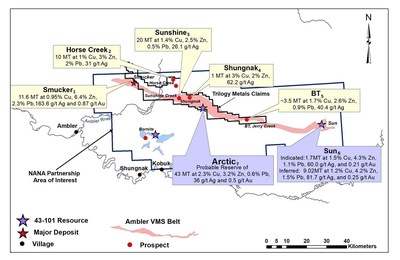 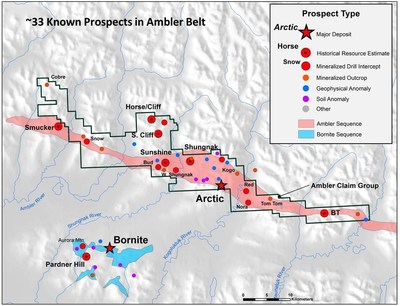 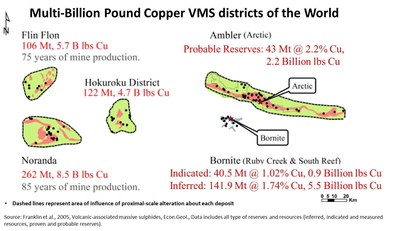 Last December the Company's technical team held meetings in Perth, Australia with representatives of South32 Limited (ASX, LSE, JSE: S32; ADR: SOUHY) ("South32"). Subsequent to these meetings, additional discussions took place in Vancouver resulting in both Companies agreeing to increase exploration expenditures at the UKMP by $2 million. The additional $2.0 million has been approved for regional or district exploration focused on identifying and testing new drill targets within the Ambler Volcanogenic Massive Sulphide ("VMS") Belt. The Company will contribute $1 million to the UKMP regional program and South32 will contribute the remaining $1 million.

The $1 million that South32 is contributing is in excess of the $30 million in option payments that South32 has already contributed to maintain the option to form a 50/50 joint venture on the UKMP (see the press release dated January 31, 2019 for more information on the option agreement between Trilogy and South32).

Rick Van Nieuwenhuyse, President and CEO of Trilogy Metals commented, "As an exploration geologist, I am very excited that the Technical Committee and South32 have agreed to equally fund a $2 million exploration program along the Ambler VMS belt.  The program will include a VTEM airborne geophysical survey along the entire belt.  Follow-up ZTEM may be flown in certain areas.  High priority targets will be evaluated with follow-up drilling.  There are dozens of known VMS prospects along the 75 mile-long Ambler Belt including many with historic resources.  It is exciting to be drilling new exploration targets again.  We are confident that we can find additional high-grade polymetallic resources along this prolific mineral belt."

The Ambler mining district is located on the southern margin of the Brooks Range. Within this VMS belt, several deposits and prospects (including the Arctic Deposit) are hosted in the Ambler Sequence, a group of Middle Devonian to Early Mississippian, metamorphosed, bimodal volcanic and volcaniclastic rocks with interbedded siliceousclastic, graphitic, and calcareous metasediments. The Ambler sequence occurs in the upper part of the regional Anirak Schist. VMS-style mineralization is found along the entire 110 km strike length of the district. In addition to the Arctic Deposit, numerous other VMS-like occurrences are present on the Trilogy Metals land package. The most notable of these occurrences are the Dead Creek (also known as Shungnak), Sunshine, Cliff, Horse, and the Snow prospects to the west of the Arctic Deposit and the Red, Nora, Tom-Tom and BT prospects to the east (Figures 1 and 2).

Generally, VMS belts host clusters of deposits that can range from 1 million tonnes to over 100 million tonnes, and can contain high-grade copper, zinc, lead and precious metals. Some of the most prolific base-metal mineral belts in the world are within VMS districts such as the Flin Flon Belt of northern Manitoba, the Iberian Pyrite Belt in Spain and Portugal and the Noranda area of Quebec (Figure 3).

The Company is well financed to complete these programs.  With cash and cash equivalents at its fiscal year-end over $20.0 million and the funding from South32 of $10.2 million, the Company has over $30.0 million to advance the UKMP Projects.  Trilogy also has 6.5 million warrants held by large shareholders expiring on July 2, 2019, at an exercise price of $1.52 which is below the Company's current trading price.  Trilogy would receive an additional $10 million with the full exercise of the warrants.

Trilogy Metals Inc. is a metals exploration and development company focused on exploring and developing the Ambler mining district located in northwestern Alaska. It is one of the richest and most-prospective known copper-dominant districts located in one of the safest geopolitical jurisdictions in the world. It hosts world-class polymetallic volcanogenic massive sulphide ("VMS") deposits that contain copper, zinc, lead, gold and silver, and carbonate replacement deposits which have been found to host high-grade copper and cobalt mineralization. Exploration efforts have been focused on two deposits in the Ambler mining district - the Arctic VMS deposit and the Bornite carbonate replacement deposit. Both deposits are located within the Company's land package that spans approximately 143,000 hectares. The Company has an agreement with NANA Regional Corporation, Inc., a Regional Alaska Native Corporation that provides a framework for the exploration and potential development of the Ambler mining district in cooperation with local communities. Our vision is to develop the Ambler mining district into a premier North American copper producer.

This press release includes certain "forward-looking information" and "forward-looking statements" (collectively "forward-looking statements") within the meaning of applicable Canadian and United States securities legislation including the United States Private Securities Litigation Reform Act of 1995. All statements, other than statements of historical fact, included herein, including, without limitation, further drilling and exploration activity, the potential advancement of the AMDIAP, the Company's ability to find additional resources at the UKMP and mining generally in Alaska, the timing and the filing of updated reports on the Company's projects, the future price of copper, the estimation of mineral reserves and mineral resources, the realization of mineral reserve and mineral resource estimates, the timing and amount of estimated future production, costs of production, capital expenditures, costs and timing of the development of projects, the likelihood and timing of the AMDIAP, the potential future development of Bornite, the future operating or financial performance of the Company, planned expenditures and the anticipated activity at the UKMP Projects, are forward-looking statements. Forward-looking statements are frequently, but not always, identified by words such as "expects", "anticipates", "believes", "intends", "estimates", "potential", "possible", and similar expressions, or statements that events, conditions, or results "will", "may", "could", or "should" occur or be achieved. These forward-looking statements may include statements regarding perceived merit of properties; exploration plans and budgets; mineral reserves and resource estimates; work programs; capital expenditures; timelines; strategic plans; market prices for precious and base metals; or other statements that are not statements of fact. Forward-looking statements involve various risks and uncertainties. There can be no assurance that such statements will prove to be accurate, and actual results and future events could differ materially from those anticipated in such statements. Important factors that could cause actual results to differ materially from the Company's expectations include the uncertainties involving success of exploration, development and mining activities, permitting timelines, requirements for additional capital, government regulation of mining operations, environmental risks, unanticipated reclamation expenses; mineral reserve and resource estimates and the assumptions upon which they are based; assumptions and discount rates being appropriately applied to the pre-feasibility study; our assumptions with respect to the likelihood and timing of the AMDIAP; capital estimates; prices for energy inputs, labour, materials, supplies and services the interpretation of drill results, the need for additional financing to explore and develop properties and availability of financing in the debt and capital markets; uncertainties involved in the interpretation of drilling results and geological tests and the estimation of reserves and resources; the need for cooperation of government agencies and native groups in the development and operation of properties as well as the construction of the access road; the need to obtain permits and governmental approvals; risks of construction and mining projects such as accidents, equipment breakdowns, bad weather, non-compliance with environmental and permit requirements, unanticipated variation in geological structures, metal grades or recovery rates; unexpected cost increases, which could include significant increases in estimated capital and operating costs; fluctuations in metal prices and currency exchange rates; and other risks and uncertainties disclosed in the Company's Annual Report on Form 10-K for the year ended November 30, 2017 filed with Canadian securities regulatory authorities and with the United States Securities and Exchange Commission and in other Company reports and documents filed with applicable securities regulatory authorities from time to time. The Company's forward-looking statements reflect the beliefs, opinions and projections on the date the statements are made. The Company assumes no obligation to update the forward-looking statements or beliefs, opinions, projections, or other factors, should they change, except as required by law.

This press release has been prepared in accordance with the requirements of the securities laws in effect in Canada, which differ from the requirements of U.S. securities laws. Unless otherwise indicated, all resource and reserve estimates included in this press release have been prepared in accordance with Canadian National Instrument 43-101 Standards of Disclosure for Mineral Projects ("NI 43-101") and the Canadian Institute of Mining, Metallurgy and Petroleum (CIM)—CIM Definition Standards on Mineral Resources and Mineral Reserves, adopted by the CIM Council, as amended ("CIM Definition Standards"). NI 43-101 is a rule developed by the Canadian Securities Administrators which establishes standards for all public disclosure an issuer makes of scientific and technical information concerning mineral projects. Canadian standards, including NI 43-101, differ significantly from the requirements of the United States Securities and Exchange Commission (SEC), and resource and reserve information contained herein may not be comparable to similar information disclosed by U.S. companies. In particular, and without limiting the generality of the foregoing, the term "resource" does not equate to the term "reserves". Under U.S. standards, mineralization may not be classified as a "reserve" unless the determination has been made that the mineralization could be economically and legally produced or extracted at the time the reserve determination is made. The SEC's disclosure standards normally do not permit the inclusion of information concerning "measured mineral resources", "indicated mineral resources" or "inferred mineral resources" or other descriptions of the amount of mineralization in mineral deposits that do not constitute "reserves" by U.S. standards in documents filed with the SEC. Investors are cautioned not to assume that all or any part of "measured" or "indicated resources" will ever be converted into "reserves". Investors should also understand that "inferred mineral resources" have a great amount of uncertainty as to their existence and great uncertainty as to their economic and legal feasibility. Under Canadian rules, estimated "inferred mineral resources" may not form the basis of feasibility or pre-feasibility studies except in rare cases. Disclosure of "contained ounces" in a resource is permitted disclosure under Canadian regulations; however, the SEC normally only permits issuers to report mineralization that does not constitute "reserves" by SEC standards as in-place tonnage and grade without reference to unit measures. The requirements of NI 43-101 for identification of "reserves" are also not the same as those of the SEC, and reserves reported by Trilogy Metals in compliance with NI 43-101 may not qualify as "reserves" under SEC standards. Arctic does not have known reserves, as defined under SEC Industry Guide 7.  Accordingly, information concerning mineral deposits set forth herein may not be comparable with information made public by companies that report in accordance with U.S. standards.