VANCOUVER, Nov. 8, 2017 /CNW/ - Tinka Resources Limited ("Tinka" or the "Company") (TSXV & BVL: TK) (OTCPK: TKRFF) is pleased to announce a Mineral Resource update for its 100%-owned Ayawilca zinc- indium-silver-lead sulphide deposit in Peru which includes the addition of ~15,000 metres of drilling completed so far in 2017.  The zinc resource at Ayawilca is now estimated to be 42.7 million tonnes grading 7.3 % zinc equivalent (ZnEq).  In addition, Tinka announces an updated tin-copper-silver resource estimated to be 10.5 million tonnes grading 0.70% tin equivalent (SnEq).  The Tin Zone and Zinc Zone resources do not overlap.  Both of the Mineral Resources were assigned to the Inferred category and reported at an NSR cut-off value of US$55/tonne, as estimated by Roscoe Postle Associates Inc. (RPA Inc.) of Toronto, Canada.  Drilling beyond the Mineral Resource boundaries is continuing. 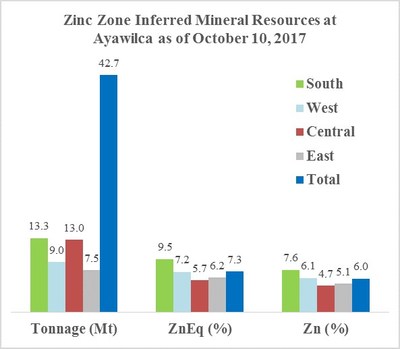 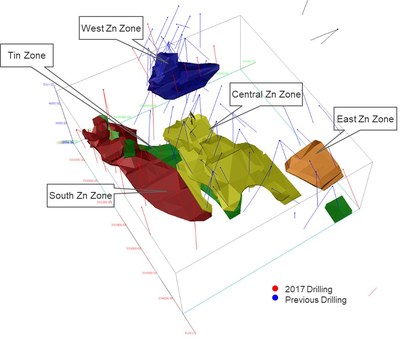 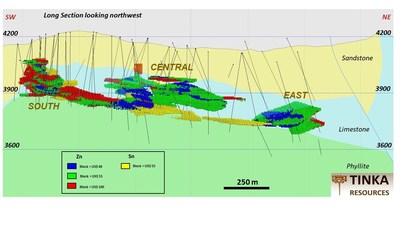 Dr. Graham Carman, Tinka's President and CEO, stated: "These updated Mineral Resource estimates are a major milestone for the Company. Ayawilca now has 5.6 billion pounds of contained zinc classified as Inferred resources, with significant potential for more as the resources are open in several directions. The updated Zinc mineral resource shows a 130 % increase in total contained pounds of zinc since the last resource estimate (May 2016), and a 127 % increase in overall tonnage (from 18.8 Mt to 42.7 Mt).  The zinc grade has gone up slightly to 6.0 % Zn (from 5.9 % Zn) while the zinc equivalent grade has decreased to 7.3 % ZnEq (from 8.2 % ZnEq) due to a higher zinc price and a lower indium price. Importantly, South Ayawilca now forms a high-grade core with 13.3 million tonnes grading 7.6 % Zn (9.5 % ZnEq) – see Table 3.  In addition, the Tin Mineral Resource has increased by 60 % since the last resource estimate (May 2016) to now include 145 million pounds of contained tin."

"I am very pleased to report that Tinka has exceeded its two initial objectives for the year; firstly, an additional high-grade zinc discovery was made at South Ayawilca; secondly, we doubled the contained pounds of zinc in the resources. Furthermore, Tinka is continuing to aggressively drill outside of the resource areas looking for new zinc discoveries and/or extensions of known mineralization - one rig is currently drilling at Zone 3, while the second rig is testing the extensions of West Ayawilca."

The Zinc Zone Mineral Resources are hosted by Triassic Pucará Group limestone approximately 200 metres thick and located beneath the Goyllarisguizga Group sandstone unit which outcrops, and hosts the Colquipucro silver oxide deposit located 1.5 km to the north.  The Zinc Zone deposit is made up of multiple, gently dipping lenses or 'mantos' in the Central and East Ayawilca zones and as massive replacement bodies within structural zones in the West and South Ayawilca zones, all located above Paleozoic basement rocks.  The bulk of the polymetallic mineralization in central Peru is located in a similar geological environment.  Inferred Mineral Resources within the Zinc Zone, reported at a US$55/t Net Smelter Return (NSR) cut-off value, are estimated to total 42.7 million tonnes at average grades of 6.0 % Zn, 79 g/t In, 17 g/t Ag, and 0.2 % Pb.

The increase in tonnage and zinc grade as compared to the May 2016 Mineral Resource estimate is due to an increase in volume of the interpreted mineralized zones as a result of the addition of the high-grade South Zone discovered during the 2017 drilling campaign, higher metal prices, and lower cut-off value.

The Tin Zone Mineral Resources are hosted as disseminated cassiterite and chalcopyrite in massive to semi-massive pyrrhotite lenses at the contact between the Pucará Group and underlying phyllite of the Devonian Excelsior Group.  Parts of the Tin Zone mineralization can occur as quartz sulphide stockwork veinlets hosted by the phyllite.  Inferred Mineral Resources within the Tin Zone, also reported at an NSR cut-off value of US$55/t, are estimated to total 10.5 million tonnes at average grades of 0.63 % Sn, 0.23 % Cu and 12 g/t Ag.  Similar to the Zinc Zones, the increase in tonnage is due to an increased volume of the interpreted zones due to the newly discovered South Zone and a lower cut-off grade.

The Ayawilca drill database includes 44,846 m in 122 drill holes.  A set of cross-sections and level plans were interpreted to construct three-dimensional wireframe models at approximate NSR cut-off value of $50/t for both Zinc and Tin Zones.  Prior to compositing to two metre lengths, high Zn, Sn, In, and Ag values were cut to 25%, 4%, 500 g/t, and 100 g/t, respectively.  Block model grades within the wireframe models were interpolated by inverse distance cubed.  Despite lead grades being low it is assumed that lead and silver will be recovered in a lead concentrate.  Density was estimated to be 3.6 t/m3 for the Zinc Zones and 3.9 t/m3 for the Tin Zones.  All Mineral Resources were assigned to the Inferred category due to the widely spaced drilling.  No Mineral Reserves have yet been estimated at Ayawilca.

A National Instrument 43-101 Technical Report will be filed on SEDAR within 45 days.

The qualified person, Dr. Graham Carman, Tinka's President and CEO, and a Fellow of the Australasian Institute of Mining and Metallurgy, has reviewed and verified the technical contents of this release.

About Tinka Resources LimitedTinka is an exploration and development company with its flagship property being the 100%-owned Ayawilca carbonate replacement deposit (CRD) in the zinc-lead-silver belt of central Peru, 200 kilometres northeast of Lima. The Ayawilca Zinc Zone Inferred Mineral Resource estimate now consists of 42.7 Mt at 6.0 % zinc, 0.2 % lead, 17 g/t silver & 79 g/t indium, and a Tin Zone Inferred Mineral Resource of 10.5 Mt at 0.63 % tin, 0.23 % copper & 12 g/t silver (this release). Drilling for resource extensions and the testing of new targets is ongoing.