VANCOUVER, Sept. 5, 2019 /CNW/ - Tinka Resources Limited ("Tinka" or the "Company") (TSXV & BVL: TK) (OTCPK: TKRFF) is pleased to announce assay results for two recent holes drilled at the Company's 100%-owned Ayawilca Property in central Peru. Drilling is continuing with one rig operating at the South Ayawilca area, with the focus on expanding and upgrading the high-grade 'Zinc Zone' mineralization as defined in the Company's recent Preliminary Economic Assessment (PEA). 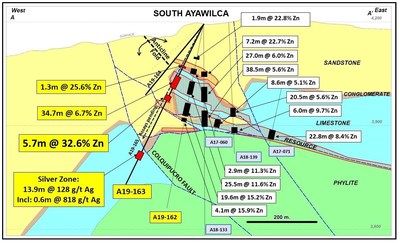 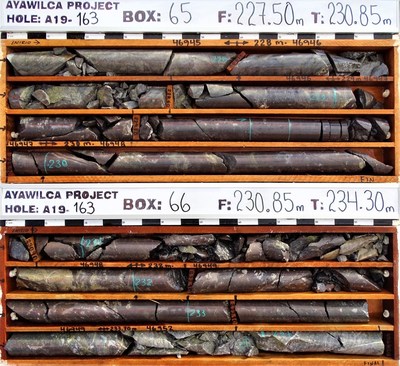 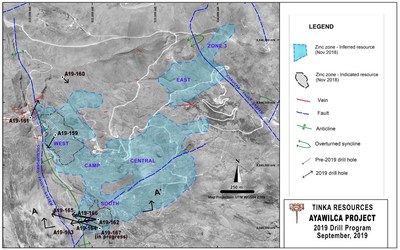 Hole A19-163 intercepted two intervals of high grade zinc mineralization close to the margin of the current inferred resource. The hole intersected one of the highest grade intervals ever drilled at South Ayawilca.  In addition, a new style of silver-rich mineralization with disseminated zinc - lead was intersected deeper in hole A19-163 within a down-faulted limestone more than 100 metres beneath the current resource, with mineralization remaining open to the west and at depth. The footprint of the mineralization at Ayawilca continues to expand, and still offers exciting exploration upside.

Recent drilling has significantly advanced the geological model and understanding of the geometry of the high grade zinc mineralization at the western end of South Ayawilca. The second hole reported here, A19-164, was drilled up-dip from hole A19-163 at a shallower angle (50 degree dip) to test for extensions of the existing zinc mineral resource but did not encounter mineralization. A19-164 is interpreted to have drilled into the roof zone of a hinge of an anticline fold, the core of which hosts very high grade mineralization in multiple lenses or 'mantos', including those intercepted in A19-163.

Dr. Graham Carman, Tinka's President and CEO, stated: "The ongoing drill program at South Ayawilca is focused on the expansion and upgrading of high-grade resources in the Zinc Zone. We are excited that new drill holes like A19-163 continue to intersect exceptional zinc grades.  The recently completed PEA shows that the project economics is sensitive to zinc grade, so expansions or upgrading of these higher grade zinc resources will have a positive impact on the project economics in future studies."

"With the discovery of the Lower Silver Zone in hole A19-164, we have proven that mineralization exists within a deeper limestone at South Ayawilca, 100 to 150 metres beneath the existing resource, open to the west and at depth. The Lower Silver Zone so far consists of disseminated sulphides hosted in strongly altered limestone where the original rock has been almost completely replaced by iron - manganese carbonates, a style of mineralization and alteration that had previously been encountered only in vein form around the edges of the massive sulphide mineralization.  Further drilling is planned for the Lower Silver Zone, including the deepening of a 2017 drill hole (A19-167) which is currently in progress.  Holes A19-165 and 166 were recently completed and assays are pending."

This release presents results for two new holes from South Ayawilca (A19-163 and A19-164).  Hole A19-163 intersected two high grade intervals of zinc mineralization on the edge of the existing mineral resource between 170 and 240 metres depth (see Figure 1). The zinc intercepts in this hole consist of reddish-coloured massive sphalerite (see Figure 2), a style of zinc mineralization with relatively low iron.

The Lower Silver Zone mineralization in hole A19-163 is hosted by recrystallized and altered limestone at approximately 400 metres depth, separated from the Zinc Zone resource by a reverse fault (the Colquipucro Fault system – see Figures 1 & 3). The fault displacement is believed to be post-mineral, so the downthrown western fault block could host extensions of the high-grade zinc mineralization as well as the silver-rich mineralization.  Hole A19-164 did not intersect significant mineralization up-dip from A19-163, and is interpreted to have remained in the barren roof zone of a tightly folded anticline structure (Figure 1).

The 2019 drilling has highlighted several complexities in the structure of the Ayawilca deposit, which is assisting us greatly in understanding the controls and distribution of the high grade mineralization. A shallow east-dipping contact between phyllite and limestone is interpreted to be an early low-angle thrust fault which pre-dates mineralization. The thrust fault was important in the preparation of the host rocks (brecciation) and likely occurred at the same time as the anticline folding.  These low angle structures acted as feeders for the zinc mineralization and the anticline fold acted as a structural trap. Some of the highest grades encountered at Ayawilca are found within the limestone core of the anticline.

The mineralization is interpreted to be displaced by the post-mineral Colquipucro Fault, with a possible offset of at least 100-150 metres vertically, with additional unknown lateral displacement.  The Lower Silver Zone mineralization occurs within this downthrown block, and remains open and untested to the west.

Note: True thicknesses of the zinc intersections in Table 1 are estimated to be at least 85% of the downhole thicknesses as the zinc mineralization at Ayawilca is generally flat-dipping replacement of layers or 'mantos' hosted by limestone and/or sandstone.  The true thickness of the silver intersection cannot be determined at this time as insufficient data is available.

Notes on sampling and assaying

Drill holes are diamond HQ or NQ size core holes with recoveries generally above 80% and often close to 100%. The drill core is marked up, logged, and photographed on site. The cores are cut in half at the Company's core storage facility, with half-cores stored as a future reference. Half-core is bagged on average over 1 to 2 metre composite intervals and sent to ALS laboratories in Lima for assay in batches. Standards and blanks are inserted into each batch prior to departure from Tinka's core storage facilities. At the laboratory samples are dried, crushed to 100% passing 2mm, then 500 grams pulverized for multi-element analysis by ICP using multi-acid digestion. Samples assaying over 1% zinc, lead, or copper and over 100 g/t silver are re-assayed using precise ore-grade AAS techniques.

Dr. Graham Carman, Tinka's President and CEO, reviewed, verified and compiled the technical contents of this release. Dr Carman is a Fellow of the Australasian Institute of Mining and Metallurgy, and is a qualified person as defined by National Instrument 43-101.