STREAM THE FIRST EPISODE ON THE FAMILY CHANNEL APP MARCH 1

TORONTO, Feb. 19, 2019 /CNW/ - The Pneumatic Watermelon Squisher, a robotic high-fiver and a coffee drone are just some of the clever and wacky inventions coming to Family Channel this March in the new series Bajillionaires. Debuting as a two-day television event on Saturday, March 2 and Sunday, March 3 at 10 a.m. ET/PT, the live-action comedy follows a group of neighbourhood pals as they try to invent an amazing product, change the world and maybe even make a bajillion dollars in the process! The premiere weekend kicks off Family Channel's massive March schedule, an incredible lineup complete with returning fan-favourites, must-see movies and brand new shows. Fans who can't wait to get inventive can check out the Bajillionaires YouTube channel for exclusive video content including fun experiments with the cast, and stream the first episode on the Family Channel App beginning March 1. 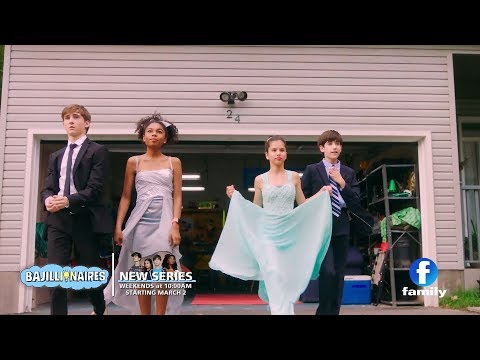 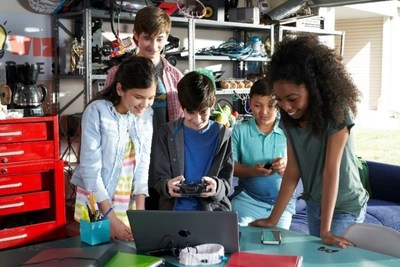 Twelve-year-old Max Graham is President and CEO of a tiny start-up company that he runs with his friends out of his parents' garage. The gang is constantly brainstorming ideas for new inventions, and while most of their ideas are hilariously bad, totally weird and completely impossible, they're always learning something new, becoming better friends and getting one step closer to their BIG idea. In the premiere episode, the gang build a delivery drone, vibrating headband and super juicer to try to qualify for InventiveCon – an invention convention with a big cash prize. Following the premiere weekend, new episodes of Bajillionaires will air Sundays at 10 a.m. ET/PT and will be offered on the Family Channel App and Family OnDemand.

The creativity continues on the Bajillionaires YouTube Channel where young entrepreneurs can check out behind-the-scenes videos, learn how to conduct awesome science experiments, play fun games with the cast and so much more! For more information about the series and its characters, fans can follow Bajillionaires on social media: Facebook.com/bajillionairestv, Twitter: @Bajillions and Instagram: @Bajillionaires.

In addition to Bajillionaires, Family's March schedule is jam-packed with can't-miss programming for the entire family including: the mid-season premiere of the popular tween drama The Next Step on Saturday, March 2 at 2:30 p.m. ET/PT; the outrageous new game show Beat the Clock debuting  Saturday, March 9 at 4:30 p.m. ET/PT; the return of the reality competition series American Ninja Warrior Junior on Monday, March 11 at 8 p.m. ET/PT; popular movie titles like Ice Age: Collision Course, Cloudy with a Chance of Meatballs 2, Hotel Transylvania and Megamind, and new episodes from fan-favourite series Holly Hobbie, Wipeout and Miraculous: Tales of Ladybug & Cat Noir airing all month-long.

Family Channel offers the best in family television entertainment in a premium, high-definition, multiplatform environment. Dedicated to celebrating family life and providing opportunities for the whole family to gather and watch together, Family airs a unique mix of top-rated Canadian and acquired series, movies and specials. Family Channel subscribers have access to the Family Channel App, Family OnDemand and Family Online at no additional cost, to see hit movies and series when they want them, where they want them. Visit us at Family.ca.

About DHX Television  DHX Television is composed of Family Channel, Family CHRGD, Family Jr. and Télémagino, and is part of DHX Media Ltd., a leading creator, producer, marketer and broadcaster of family entertainment. Dedicated to celebrating family fun, DHX Television delivers best-in-class programming through premium subscriptions and its original production mandate, and creates and produces captivating in-market events that appeal to Canadian families. DHX Television is home to world-renowned series including The Next Step, American Ninja Warrior Junior and Mega Man: Fully Charged. DHX Media Ltd. has offices globally, and is traded on the NASDAQ and Toronto Stock Exchange.