DUBAI, UAE, Dec. 31, 2019 /CNW/ -- Emaar, the master developer of the Burj Khalifa, wowed over 2 billion people across the globe with a breathtaking pyrotechnic show on the world's tallest building to ring in 2020. In a mesmerising story, the Burj Khalifa transformed through animation, light, sounds and a synchronized fountain show taking viewers on a journey at the onset of a new decade. 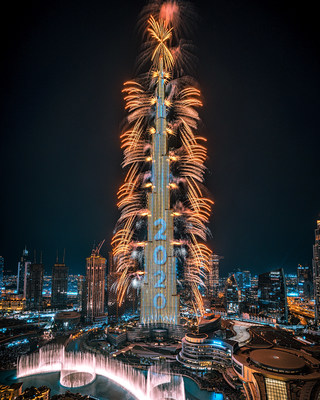 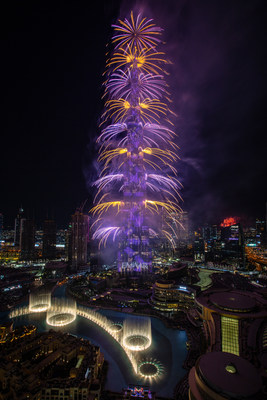 Following the traditional 10 second digital countdown on the lit façade of Burj Khalifa, the clock struck midnight, signalling the Downtown Dubai skyline to be filled with a flurry of fireworks and colour for record-breaking eight-minute and forty three seconds long show. Those lucky enough to view the show, were treated to the longest set of consecutive fireworks in the history of the Burj Khalifa NYE shows, timed at over five minutes. The show featured a total of 1,371 kg of fireworks, which were placed across a colossal 207 firing locations.

To mark the dawn of a new decade, the show on Burj Khalifa was conceptualized by Emaar. Every second of the show was as enchanting as previously billed and incorporated fireworks, animations on the Burj Khalifa LED façade, music compositions and a beautiful fountain show.

The highly anticipated event welcomed over one million onlookers in Downtown Dubai, Emaar's flagship mega-development, to witness 15,000 perfectly choreographed fireworks showcasing 48 pyrotechnic patterns, signalling the start of a new decade. All pyrotechnic effects were specially selected and manufactured for the show, ensuring the unique fireworks designs and effects were truly one-of-a-kind.

Celebrations also included the longest ever The Dubai Fountain Show since the fountains launched in 2009, adding yet another prestigious milestone of the water-music spectacle. The world-famous show took 160 hours across four weeks to choreograph and featured 113.5 kilolitres of water in the air at one time, released from an astounding 1,137 water shooters, and 6,612 lights.

Select aspects of the show referenced regional culture, art and music. Before the clock struck twelve, animations on the Burj Khalifa transformed the tower into the traditional Oud instrument and strummed to the beat of an arabesque melody, thereafter was a beautiful ensemble of blossoming flowers, add further finesse and beauty to the show. Complimentary to this and highlighting the synergy between partners, flags from GCC countries were shown on the façade of the iconic monument to celebrate the strong bond between these nations.

Following unprecedented demand, Emaar granted people from all over the world the once-in-a-lifetime opportunity to have their New Year wish displayed on the LED façade of Burj Khalifa during the Emaar NYE 2020 celebration. The show's 'Burj Wishes' social media campaigns reached tens of thousands of users, with those participating posting their wish to the world on Emaar's Twitter, Facebook or Instagram accounts @EmaarDubai using the hashtag #EmaarNYE2020.

Emaar's NYE 2020 social media campaign, in partnership with TikTok, continued the close relationship between the brands, with Emaar's 2020makeawish TikTok challenge, engaging with over an astounding 30 million users in the lead up to the New Year celebrations.

Mr. Ahmad Matrooshi, Managing Director, Emaar Properties, said: "We at Emaar are extremely proud to host and produce this event for the world to enjoy. As we enter a new decade, our vision is to continue driving innovation, progression and a prosperous future, here in Dubai, the UAE - and the world."

Emaar NYE 2020 was one of the world's most-watched New Year's Eve celebrations telecast live globally and live-streamed on mydubainewyear.com and EmaarDubai YouTube channel. The experience can be re-watched online at mydubainewyear.com.