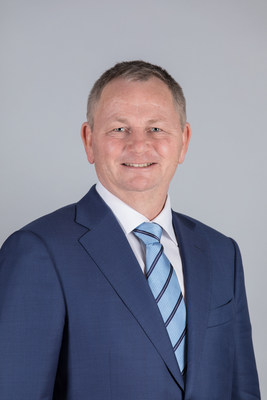 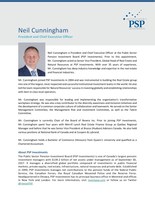 "Neil Cunningham has been a key player in PSP Investments' evolution, both as an investor and as a senior executive.  He has played a key role in developing and implementing the organization's current strategic plan, and possesses a deep understanding of the business, mandate and stakeholders of PSP Investments.  This extensive experience, along with Neil's consistent demonstration of the core values of the enterprise, makes him the natural and ideal next leader of PSP Investments," said Martin Glynn, Chair Designate of the Board.

"I am delighted and honoured to have been selected by the Board to lead PSP Investments," said Mr. Cunningham.  "Our organization is a leader in pension investment management and its position and importance will continue to grow. I am looking forward to this exciting challenge of taking PSP Investments to the next level.  Together with the senior management team and the many skilled, dedicated professionals across the organization, I am confident that we will continue to achieve our ambitious goals and satisfy our mandate."

The appointment of Mr. Cunningham comes with the departure of Mr. Bourbonnais after three years of service as President and CEO.  Under his guidance, PSP Investments underwent an accelerated evolution which included the restructuring of the Private Equity group, the creation of a Private Debt asset class, the opening of offices in New York and London and a net return of 12.8% for the fiscal year closing at March 31, 2017. During Mr. Bourbonnais' tenure, PSP Investments also developed a five-year strategic plan titled Vision 2021.

"André had a very positive impact on PSP Investments during his time as President and CEO.  His leadership and focused commitment made it a unique pleasure to work alongside him for the last three years.  We wish him every success as he pursues his next challenges and look forward to Neil continuing the important initiatives underway at PSP Investments," said Martin Glynn, Chair Designate of the Board.

"Making the decision to leave the leadership role of PSP Investments was a difficult one. I am very proud of what we accomplished here together, thanks to the great professionals with whom I have had the pleasure of working with and the continued support of the Board of Directors. PSP Investments is an extraordinary organization, a leading global institutional investor best positioned to take advantage of the opportunities ahead as it creates value for its contributors and beneficiaries," said André Bourbonnais, outgoing President and CEO of PSP Investments.

About PSP Investments The Public Sector Pension Investment Board (PSP Investments) is one of Canada's largest pension investment managers with $139.2 billion of net assets under management as of September 30, 2017. It manages a diversified global portfolio composed of investments in public financial markets, private equity, real estate, infrastructure, natural resources and private debt. Established in 1999, PSP Investments manages net contributions to the pension funds of the federal Public Service, the Canadian Forces, the Royal Canadian Mounted Police and the Reserve Force. Headquartered in Ottawa, PSP Investments has its principal business office in Montréal and offices in New York and London. For more information, visit investpsp.com or follow us on Twitter @InvestPSP.