VANCOUVER, British Columbia, July 24, 2019 /CNW/ -- Surge Exploration Inc. ("the Company" or "Surge") (TSX-V: SUR) (OTCQB: SURJF) (FRA: DJ5C) would like to provide its shareholders with additional information regarding the history and current status of the company, as well as, its proposed operating plan for 2020.

LETTER FROM THE PRESIDENT 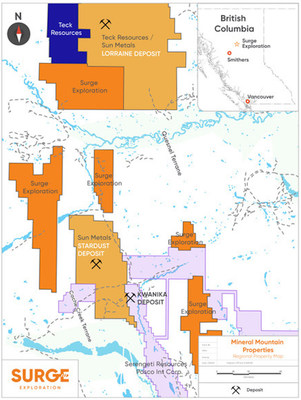 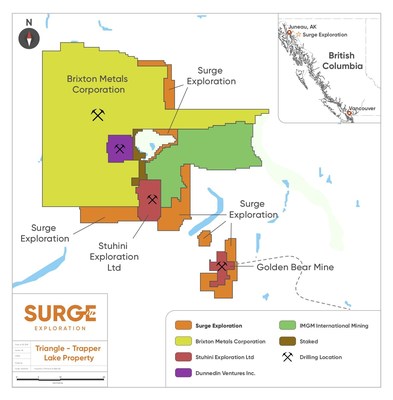 TO OUR SHAREHOLDERS AND PARTNERS:

Over the course of the last year, the Company has announced several key initiatives that have resulted in the Company becoming a land bank of key gold, copper and cobalt mineral exploration properties in Canada.  With the announcement of the refocusing of the Company on April 23, 2019 , Surge and its management team have added several key copper-gold mineral exploration properties in British Columbia Canada, namely the Mineral Mountain Properties (North Central, BC) and the Trapper Lake Properties (Golden Triangle, BC), to complement our existing BC copper-gold property, Hedgehog, and our Ontario cobalt properties, Teledyne and Glencore Bucke.

Mr. Tim Fernback, Surge President & CEO, comments, "Given the direction of the cobalt commodity markets lately hovering at what we regard as low commodity prices of US$12-15/lb, the Company has decided to focus its resources on its Canadian copper gold properties. Management and the Board both agree that this effort should provide the biggest opportunity for Surge shareholders going forward. In particular, our exploration properties in British Columbia's Omineca and Golden Triangle Region appear to well situated given the proposed 2019 exploration activity in the area by our neighbours. This 2019 activity includes CAD$23.7 million to be spent by Barkerville Gold Mines Ltd. (TSXV: BGM) nearby our Hedghog Property, CAD$5.4 million to be spent by Sun Metals Corp. (TSXV: SUNM) nearby our Mineral Mountain Properties and a projected initial 1,000 m of drilling by Brixton Metals Corp. (TSXV: BBB) which is nearby our Trapper Lake Properties."

"We are very excited to acquire these key additional mineral claims in mining friendly British Columbia. This area has already generated several promising projects, and is the subject of significant interest and exploration expenditure in 2019 by many prominent exploration companies like Sun Metals, Teck Resources, Centerra Gold, Serengeti Resources, Barkerville Gold Mines, and Brixton Metals Corp.  Furthermore, this region is host to numerous operating mines, good infrastructure including experienced exploration and supporting services. Our exploration team believes that this land package is strategically situated to exploit the high copper-gold values of the region."

"In 2019, the Mining Journal of London gave British Columbia the title of Least Risky Global Mining Jurisdiction and the BC government has made some big infrastructure investments including a CAD$736 million investment in power line transmission to the north and made permanent a popular flow-through tax benefit investment incentives which encourages significant investment in exploration. The fact that large global mining companies like Newmont Goldcorp (NYSE: NEM) are investing large $$ to buy into the Galore Creek Partnership with Tech Resources (TSE: TECK.B) and Newcrest Mining Limited (ASX: NCM) has invested  US$806.5 million to buy 70% of the Red Chris Mine from Imperial Metals Corp (TSX: III) inside BC's Golden Triangle.

Furthermore Mr. Fernback states, "Long-term, the Company believes in the market for cobalt and we will continue to explore and develop our cobalt properties in Ontario. They are great and important Company assets because of the predicted emergence of the overall Electric Vehicle ("EV") market.  An EV like a Tesla Model S needs 51 lbs of cobalt for its battery. Cobalt is an essential component in a lithium ion rechargeable battery, and this technology used in all sorts of desirable consumer items such as cars, laptops, cell phones, appliances etc. EVs are expected to drive a large part of this increased future metal demand. Globally EVs are projected to grow from a small number today to 140 million vehicles by the year 2035. China plans to ban the sale and production of gas powered cars by the year 2040, as it grapples with ways to improve overall air quality and China is expected to be the largest global market for EVs. As you can see the future for cobalt is certainly bright and Surge management is extremely bullish on the future demand for this metal."

We are now planning our 2019 / 2020 Canadian exploration programs, and plan to both further enhance and move our mineral exploration properties forward.

The BC properties technical content of this news release dealing with the Omineca properties and the Hedge Hog property has been reviewed by Bruce Laird, P.Geo., an independent consulting geologist and a qualified person within the context of NI 43-101.

The Company is a Canadian-based mineral exploration company which has been active in the resource sector in British Columbia and elsewhere in Canada.

The Company owns 100% interest in the Golden Triangle – Trapper Lake Group of 14 mineral claims which are located in the prolific Golden Triangle Region of northwestern British Columbia approximately 90 km ENE from Juneau, Alaska. Surges' staking program acquired an area of 213 sq. km within the regionally important geological and structural trend. A large portion of the new property is adjacent to the Thorn Project owned by Brixton Metal's Corp. ("Brixton",TSXV: BBB) with the balance covering prospective open ground containing numerous B.C. Minfile showings with Cu, Ag, Au values adjoining the boundaries of the Golden Bear Mine of Chevron Resources, a 480,000 oz Au past producer.

In Brixton's news release dated July 15, 2019 (Brixton News Release), they reported results from drill hole THN19-150, which was drilled to 829.06 metres depth at the Oban diatreme breccia pipe within the Camp Creek copper corridor. Brixton reported a drill hole intercept of 1.97 grams per tonne gold equivalent across 554.70 meters including 135.96M of 1.35 g/t Au, 0.31 Cu, 133.62 g/t Ag or 5.00 g/t Aueq including 6M of 3.56% Cu, 3.37 g/t Au, 257.77 g/t Ag.   Structural mapping and soil-rock geochemistry at the Chivas zone and relogging of select core from the Glenfiddich zone were also conducted as part of the overall exploration program at the Thorn Project.

The Company owns a 100% interest in the Omineca Group of 12 claim blocks which are located in the Omineca Mining Division of north-central British Columbia, approximately 150 km north of Fort St. James. The claims are not subject to any royalty terms, back-in rights, payments or any other agreements and encumbrances.

B.C. Minfile assessment report data indicates that most of the area covered by the Omineca Group claim blocks were at one time or another covered by staking during surges of exploration in B.C. dating from the 1940's to present day. Largely the claims appear to have been minimally explored with little follow-up. However, some work was recorded on several claims with results for stream sediment sampling showing anomalous to highly anomalous results for gold in a few areas. These areas were recommended for detailed follow-up, however due to a previous commodity price downturn no further work was recorded.

The Company has an option to earn an undivided 60% interest seven mineral tenure covering 2,418 hectares (5,972 acres) located approximately 80 km northeast of the town of Quesnel, BC and 20 km north of the historic gold mining towns of Wells and Barkerville.

The Company has an option to earn an undivided 60% interest in the Glencore Bucke Property and the Teledyne Property, located in Cobalt, Ontario Canada.

Neither the TSX Venture Exchange nor its Regulation Services Provider (as that term is defined in the policies of the TSX Venture Exchange) accepts responsibility for the adequacy or accuracy of this release. This news release may contain forward‐looking statements which include, but are not limited to, comments that involve future events and conditions, which are subject to various risks and uncertainties. Except for statements of historical facts, comments that address resource potential, upcoming work programs, geological interpretations, receipt and security of mineral property titles, availability of funds, and others are forward‐looking. Forward‐looking statements are not guarantees of future performance and actual results may vary materially from those statements. General business conditions are factors that could cause actual results to vary materially from forward‐looking statements.