Based on excellent development drilling results in all three of Surge's core areas, together with successful waterflood results at Shaunavon and Eyehill, the Company's Q2/18 production significantly exceeded management's budgeted expectations. 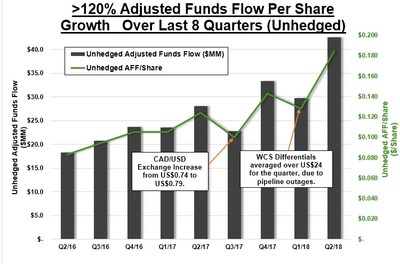 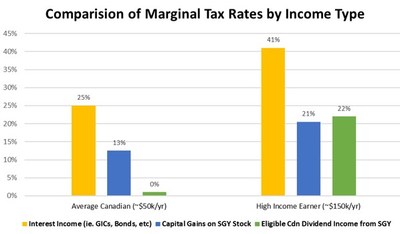 In Q2/18 Surge's production averaged 17,072 boepd (81 percent oil and liquids) - which is very close to the Company's 2018 production exit rate guidance of 17,175 boepd. This exciting operational result was 10 percent above Surge's budgeted expectations, and was accomplished during spring break-up where the Company had a reduced drilling program.

As a result of the Company's consistent quarterly production per share growth, combined with higher oil prices, Surge's adjusted funds flow per share in Q2/18 increased by 38 percent as compared to Q1/18.

Based on better than anticipated drilling and waterflood results in the Company's three core areas at Sparky, Valhalla, and Shaunavon, Surge's Q2/18 average production of 17,072 boepd significantly exceeded management's budget expectations, and all street estimates.

The Company has now delivered production per share growth of 34 percent over the last eight financial quarters, while maintaining a net debt to adjusted funds flow ratio of under two times:

In the context of today's rising crude oil price business environment, Surge management is excited to remind the Company's shareholders of the many total rate of return components, and the substantial tax benefits, associated with Surge's multi-faceted, low risk business model.

Furthermore, in addition to the above total rate of return components, examples of the very beneficial tax efficiencies associated with Surge's low risk, growth/compounding dividend/ free adjusted funds flow/capital gain business model are set forth below1:

*Note: For those shareholders in the highest marginal tax bracket in Alberta; capital gains and eligible dividends are approximately 50% and 34% more tax-effective, respectively, as compared to interest income.

Surge is able to provide the very tax-efficient returns set forth above as a result of the Company's substantial, high graded, tax pool base (currently estimated to be in excess of CAD $1.0 billion), which provides an internally estimated tax horizon of more than five years, based on Sproule's new June 30, 2018 crude oil price deck (i.e. no significant cash tax payments anticipated).

In the current environment of rising taxes, Surge is pleased to be able to deliver the above, "after tax", efficient returns to its shareholders.

As discussed above, Surge exceeded management's budgeted production expectations for Q2/18 by 10 percent. Production in Q2/18 averaged 17,072 boepd (81 percent oil and liquids), compared to the Company's internal budget of 15,579 boepd, and analyst consensus on the street of 16,250 boepd.

During the spring break-up quarter in Q2/18, Surge implemented a reduced drilling program, with all-in capital expenditures of $23.3 million. Surge's Q2/18 program included the drilling of 5 wells (5 net), together with associated capex for infrastructure, land and seismic. The Company experienced a 100 percent success rate for the Q2/18 drilling program.

In early June, the Company began its 2H/18 drilling program where Surge plans to drill and complete a total of 25 wells in its three core areas, including 16 Sparky area wells, 6 Shaunavon wells, and 3 Valhalla wells.

In addition, Surge will also be drilling 3 more wells at its large 75 million net barrel internally estimated OOIP, Sparky pool at Provost, to follow up on Surge's last 5 Provost wells - which are averaging 165 percent of type curve. The Company internally estimates more than 40 follow-up locations at Provost.

Surge continues to maintain the Company's track record over the last eight financial quarters of delivering:

More particularly, this press release contains statements concerning: management's expectations with respect to the development of its asset base; production volumes; drilling activities, inventories and locations, and the associated risks; Surge's capital expenditure program, including drilling and development plans and enhanced recovery projects and the timing and results to be expected thereof; expectations with respect to the Company's ability to operate and succeed in the current commodity price environment; changes to the current commodity price environment; the Company's declared focus and primary goals, including the Five-Year Business Model; 2018 exit production and production per share growth; Surge's dividend; simple payout ratio; operating and corporate netbacks; characteristics of certain wells or assets; management's estimates and expectations regarding capital expenditures and operating costs, growth opportunities and strategies, the underlying value of Surge's common shares, estimated reserves and estimated reserve and resources; the Company's 2018 guidance; sustainability of Surge's current results, production and operations; the benefits of Surge's business model and the risk associated therewith; Surge's estimated tax horizon and tax pool base; the rate of return anticipated for Surge shareholders; the availability of Surge's bank line to fund provide the Company with sufficient liquidity and financial flexibility; anticipated commodity prices; and management's expectations regarding debt levels.

The forward-looking statements are based on certain key expectations and assumptions made by Surge, including expectations and assumptions concerning the performance of existing wells and success obtained in drilling new wells, anticipated expenses, adjusted funds flow and capital expenditures, the application of regulatory and royalty regimes, prevailing commodity prices and economic conditions, development and completion activities, the performance of new wells, the successful implementation of waterflood programs, the availability of and performance of facilities and pipelines, the geological characteristics of Surge's properties, the successful application of drilling, completion and seismic technology, the availability of capital, the determination of decommissioning liabilities, prevailing weather conditions, exchange rates, licensing requirements, the impact of completed facilities on operating costs, the availability and cost of capital, labour and services, the credit worthiness of industry partners and the impact of transactions on Surge's bank line.

Although Surge believes that the expectations and assumptions on which the forward-looking statements are based are reasonable, undue reliance should not be placed on the forward-looking statements because Surge can give no assurance that they will prove to be correct. Since forward-looking statements address future events and conditions, by their very nature they involve inherent risks and uncertainties. Actual results could differ materially from those currently anticipated due to a number of factors and risks. These include, but are not limited to, risks associated with the oil and gas industry in general (e.g., operational risks in development, exploration and production; delays or changes in plans with respect to exploration or development projects or capital expenditures; the uncertainty of reserve estimates; the uncertainty of estimates and projections relating to production, costs and expenses, and health, safety and environmental risks), commodity price and exchange rate fluctuations and constraint in the availability of services, adverse weather or break-up conditions, uncertainties resulting from potential delays or changes in plans with respect to exploration or development projects or capital expenditures and failure to obtain the continued support of the lenders under Surge's current bank line. Certain of these risks are set out in more detail in Surge's Annual Information Form dated March 15, 2018 and in Surge's MD&A for the period ended June 30, 2018, both of which have been filed on SEDAR and can be accessed at www.sedar.com.

Boe means barrel of oil equivalent on the basis of 1 boe to 6,000 cubic feet of natural gas. Boe may be misleading, particularly if used in isolation. A boe conversion ratio of 1 boe for 6,000 cubic feet of natural gas is based on an energy equivalency conversion method primarily applicable at the burner tip and does not represent a value equivalency at the wellhead. Boe/d and boepd means barrel of oil equivalent per day. Original Oil in Place ("OOIP") is the equivalent to Discovered Petroleum Initially In Place ("DPIIP") for the purposes of this press release.  DPIIP is defined as quantity of hydrocarbons that are estimated to be in place within a known accumulation. There is no certainty that it will be commercially viable to produce any portion of the resources. "Internally estimated" and similar terms means an estimate that is derived by Surge's internal APEGA certified Engineers, and Geologists and prepared in accordance with National Instrument 51-101 - Standards of Disclosure for Oil and Gas Activities. All internal estimates contained in this new release have been prepared effective as of June 30, 2018. IRR means Internal Rate of Return and is the discount rate required for the net Present Value to equal zero. PIR means Profit to Investment Ratio and is equal to the present value of future adjusted funds flow divided by the investment capital (a value lower than 1.0 would indicate that the projects Present Value is less than the initial investment).

This news release contains metrics commonly used in the oil and natural gas industry, such as "operating netback", "corporate netback", "FD&A costs", "recycle ratio", "simple dividend payout ratio", "all-in payout ratio" and "NAV" (Net Asset Value). These terms do not have a standardized meaning and may not be comparable to similar measures presented by other companies, and therefore should not be used to make such comparisons. Operating netback denotes total sales less royalty expenses, and operating and transportation costs calculated on a per boe basis. Corporate netback denotes operating netback less general and administrative, interest and financing expense, exploration expense plus interest income on a per boe basis. Surge considers corporate netback as an important measure to evaluate its overall corporate performance.  FD&A costs are used as a measure of capital efficiency. FD&A cost has been calculated based on exploration and development capital and acquisition capital spent in the applicable period (including changes in future development capital for that period) divided by the change in reserves for that period including revisions for that same period. Surge provides FD&A costs that incorporate all acquisitions and exclude the reserve, capital, and future development capital impact of dispositions during the year.  The foregoing calculation is based on working interest reserves. Recycle ratio is a measure for evaluating the effectiveness of a company's reinvestment program and the efficiency of capital investment.  It accomplishes this by comparing the operating netback per boe to that year's reserve FD&A cost per boe. Simple dividend payout ratio is calculated on a percentage basis as dividends declared divided by adjusted funds flow and all-in payout ratio is calculated on a percentage basis as dividends declared plus capital expenditures divided by adjusted funds flow. Simple and all-in payout ratios are used by management to monitor the dividend policy and the amount of adjusted funds flow retained by the Company for capital reinvestment. Net Asset Value ("NAV") is a calculation of per share value derived from the reserves value given by the Sproule Report, the internally estimated undeveloped land value, the internally estimated value of the Companies seismic database and the net debt of the Company.

Neither the TSX nor its Regulation Services Provider (as that term is defined in the policies of the TSX) accepts responsibility for the adequacy or accuracy of this release.

Surge Energy Inc. has the highest standards of honesty, business ethics and integrity. Managements' stated goal is to be the best positioned junior/intermediate oil and gas company in Canada. Surge has a high quality crude oil reserve, production and cash flow base, focused...