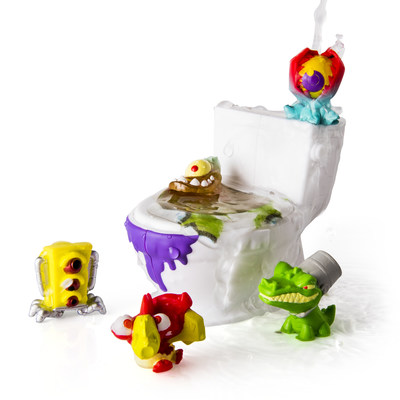 According to the NPD Group, collectibles have been a leader of growth in the toy industry, primarily driven by blind packs. The NPD Group attributes a portion of the 14% category growth in 2017 to the international popularity of Hatchimals CollEGGtibles. Hatchimals CollEGGtibles launched in May 2017 and the line was expanded in December with the launch of Season 2. The brand continues to offer exciting new extensions at low price points with positive momentum heading into the 2018 launch of Season 3.

"Spin Master is at the forefront of the collectibles trend," said Ben Gadbois, Spin Master's Global President and COO. "Through innovation, compelling characters and strong storytelling, we continue to push the boundaries to develop unique ideas. In 2018 we are launching new themes within our globally recognized Hatchimals CollEGGtibles line, and we are excited with the recent launch of Flush Force and Tech Deck Dudes."

Flush Force creatures come from deep inside the bowels of Flushville and have been mutated by toxic sludge. With 150 to collect, kids can now start their own gross gang of Flushies. To reveal whether they have a common, rare or ultra-rare figure under the toilet seat, all they must do is fill the toilet's tank with water, shake it up and peel away the toilet cover. They may get a little wet while shaking, but that's half the fun!

To extend the entertainment value beyond the reveal, episodes are available on Youtube for Hatchimals CollEGGtibles and Flush Force. Kids can hang with "Team Hatch" and further explore Hatchtopia while learning more about the common, rare and ultra-rare characters within CollEGGtibles Season 2. Beginning February 22, kids will be in for some wild, flushing action as the Flush Force characters burst out of the toilet in search of hilarious adventures.

About Spin Master Spin Master (TSX:TOY; www.spinmaster.com) is a leading global children's entertainment company that creates, designs, manufactures, licenses and markets a diversified portfolio of innovative toys, games, products and entertainment properties. Spin Master is best known for award-winning brands including Zoomer®, Bakugan®, Meccano®, and 2017 Toys of the Year, Hatchimals®, Air Hogs® and PAW Patrol®. Since 2005, Spin Master has received 92 TIA Toy of The Year (TOTY) nominations with 21 wins across a variety of product categories, including 13 TOTY nominations for Innovative Toy of the Year, more than any of its competitors. To date, Spin Master has produced six television series, including 2007 success Bakugan Battle Brawlers and current hit PAW Patrol, which is broadcast in over 160 countries and territories globally. Spin Master employs over 1,500 people globally with offices in Canada, United States, Mexico, France, Italy, United Kingdom, Slovakia, Poland, Germany, Sweden, the Netherlands, China, Hong Kong, Japan, Vietnam and Australia.