VANCOUVER, Nov. 15, 2017 /CNW/ - Spada Gold Limited (TSXV: SPL.P) ("Spada" or the "Company"), a capital pool company listed on the TSX Venture Exchange (the "Exchange") is pleased to announce that it has entered into a series of property acquisition agreements to acquire a 100% interest in the Bondoukou Project and Abengourou Project areas in Côte D'Ivoire and a 90% interest in the Odienné Project area, also in Côte D'Ivoire. The project areas include a 100% interest in a total of four exploration licenses covering approximately 1,589 km2 in Côte D'Ivoire, with a further 7 exploration licenses covering another 2,393 km2 under application.  The projects were previously controlled by Mariana Resources Limited, which was acquired by Sandstorm Gold Limited (TSX: SSL, NYSE: SAND) ("Sandstorm") in July 2017. 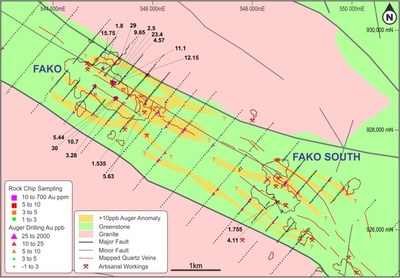 Awalé Resources will focus on gold exploration for high grade deposits in the West African Birimian Greenstone belts and the Mann Shield within the relatively underexplored country of Côte d'Ivoire. Côte d'Ivoire is underlain by nearly 33% of the entire prospective Birimian terrain; however, the country contains less than 10% of the Birimian gold resources suggesting there is significant potential for major new gold discoveries.  The Birimian of West Africa is now recognized as one the world's premier gold provinces and Awalé Resources is excited to be the next exploration company in the country.   The experienced management and local exploration team from Mariana Resources Limited remains intact and focused on advancing the company's projects in an economic and socially sustainable manner.

To Sandstorm, Spada will provide consideration of:

Any outstanding debt to Sandstorm will be satisfied by Spada issuing shares to Sandstorm in settlement of the debt at the same price as the Private Placement (described below).

To Awalé Holdings, Spada will provide consideration of:

To Newoka, Spada will provide consideration of:

The Bondoukou, Abengourou and Odienné projects are located in the Zanzan, Comoe, Dengéulé and Montagnes Regions of Côte D'Ivoire and consist of 4 (four) exploration licenses (also referred to as permits) for 1,589 km2 and a further 7 (seven) applications exploration licenses for 2,393 km2. Since 2015, more than US$1.4 million in aggregate expenditures have been incurred in exploring the properties, of which the majority was spent on the Bondoukou Project.  All of the project areas contain active artisanal gold mining operations.

A map of the of the properties can be found here:  http://www.sandstormgold.com/_resources/spada/propertymap.jpg

The Bondoukou Project will be the initial focus of the Company's exploration in Côte D'Ivoire. The Bondoukou Project lies within a Birimian-age greenstone belt in NE Côte D'Ivoire in which high grade gold mineralization is currently being mined by artisanal miners from sheeted vein complexes near the contact between a zoned granitoid intrusion and host meta-volcanic and sedimentary rocks. However, in spite of the known gold occurrences, the Bondoukou Project has seen limited modern systematic exploration and has yet to be drilled. Birimian-age greenstone belts are host to the majority of the world class orogenic gold deposits discovered in neighbouring Burkina Faso, Mali, and Ghana.

There are 12 gold mineralized target areas that were identified from a broad range of surface work, including airborne magnetic and radiometric surveys, stream sediment geochemistry, geological mapping, rock sampling and 9,515 metres of auger drilling in 2,594 holes. The results from this work have identified an 80 kilometre long zone of structurally controlled gold occurrences including the 38 kilometre long Awari Shear Zone.  Follow-up programs focused on a 15 kilometre segment of this zone.  Auger sampling within this zone has identified a 6 kilometre long trend of anomalous gold values (>10ppb) with peak values up to 1,071 ppb.  The highest current priority drill targets on the Awari Shear Zone are the Fako and Fako South targets.  Within this area, 19 artisanal mining sites have been identified.  A total of 173 rock samples have been collected from dumps and workings (0.005 g/t – 30.0 g/t gold).  Of these samples, 17 samples contained gold values ranging from 1.5 g/t – 30.0 g/t gold, with 6 samples greater than 10.0 g/t gold.  The mean of the 173 assays was 1.1 g/t gold.  Detailed results are to be included in the NI 43-101 Technical Report, prepared by Galen White for CSA Global, to be filed upon closing of the Transaction.

A map of the Fako and Fako South target areas can be found here:  http://www.sandstormgold.com/_resources/spada/geology.jpg

A drilling contractor is being mobilized to begin a 5,000 to 7,000 metre reverse circulation drill program on these targets at the Bondoukou project, with the results anticipated in the first quarter of 2018.

Awalé will also complete reconnaissance exploration at the Odienné prospect located in northwest Cote D'Ivoire.  A small low cost program will include stream sediment and soil sampling to be completed before the end of December.  Awalé Resources will continue to undertake systematic exploration of Odienné and its other areas in order to continue to rank and accelerate the generation of new high quality prospects.

The following is a short background of each person who will be a director or officer of the resulting issuer on completion of the transaction:

Glen Parsons (CA, BComm Economics) - CEO - is a qualified Chartered Accountant.  Glen Parsons has over 20 years international experience in company building, corporate finance, treasury, operational and general management. His most recent role was as Chief Executive Officer of Mariana Resources, running a diversified global exploration and development company, which was acquired in July 2017 by Sandstorm. He is also Non-Executive Chairman of AfriTin Mining Limited (AIM: ATM), an African tin focused exploration and development company.  He has built new profitable businesses and divisions within both large and small organizations. Glen was also an executive director of RFC Corporate Finance Ltd, a specialist minerals resources investment bank and fund manager. His specific experience in the junior mining and exploration sector is extensive with appropriate LSE-AIM, TSX and TSXV exchange knowledge and has been involved with a number of successful global equity and debt raisings for junior and developing mining companies on these exchanges.

Eric Roth (PhD, Economic Geology University of Western Australia, FAusIMM) - Director - was most-recently COO of Mariana Resources, which was acquired by Sandstorm in July 2017. Prior to this he was CEO of Aegean Metals Group Inc., President & CEO and then Director of Extorre Gold Mines Ltd until Extorre was acquired by Yamana Gold Inc. in June 2012. Prior to Extorre, Eric was engaged as a consultant on South American gold projects for Exeter Resource Corp. and Kinross Gold Corp. From January 2002 to March 2008, he was also employed by AngloGold Ashanti Ltd, initially as the Lima-based Peru Project and South American Opportunities Manager and subsequently as the Johannesburg-based Global Head of Greenfields Exploration. He is also a Principal of consulting firm ER Global Consulting SA.

Ron Ho (CPA, CA, CFA) - Director - has been with Sandstorm Gold Limited for the past 9 years, focused on structuring mine financing transactions and corporate development. Ron was a director of Mariana Resources prior to it being purchased by Sandstorm.  Mr. Ho is a Chartered Accountant, holds the designation of Chartered Financial Analyst charter holder and received a Bachelor of Commerce from the University of British Columbia.

Derk Hartman (MSc Mining Engineering) - Director - has over 17 years of experience in the banking and mining sectors and has been a founder, officer and director of several public and private companies. He most recently served as the Chief Financial Officer of TSX-listed Silver Bear Resources, building the Mangazeisky silver mine in Far East Russia, responsible for the transformation from exploration into production company, building the project and operations team and implementing the internal and project control systems. He is a former Director of Investment Banking at BMO Capital Markets. Having worked for 12 years in Natural Resources investment banking, he has extensive debt and equity capital markets experience, as well as experience with the stock exchange listing process, takeover rules and corporate governance of both the Toronto and London markets. Mr. Hartman holds a MSc Mining Engineering from Delft University of Technology (The Netherlands) and the FT Non-Executive Director Diploma (UK).

Sharon Cooper (CA, BA) - CFO - is a Chartered Accountant with over ten years' experience in accounting and auditing roles for mining and mining-related companies. Sharon began her career as an auditor at Ernst & Young, working on internal and external audits; and gained experience working on larger audits for major mining companies, as well as junior explorers and mining related companies. Sharon has taken on several group accounting and financial reporting roles for junior exploration companies and a mining services company since leaving Ernst & Young, and has been working as Finance Manager for Mariana Resources for the past two years.

Andrew Chubb – BSc with Honours Geology,  Member of Australian Institute of Geologists (AIG) - COO - is an economic geologist with 17 years of international experience in precious and base metal exploration with a particular focus and experience on the greenstone belts of West Africa.  He has acted both as consultant and company geologist. He has a proven track record in exploration, project management with developed technical and management skills. Andrew is a Member of the AIG and SEG.

Keith Laskowski (MSc), Sandstorm's Vice President, Technical Services is a Qualified Professional (#01221QP) of the Mining and Metallurgical Society of America and a Qualified Person as defined by Canadian National Instrument 43-101. He has reviewed and approved the technical information in this press release.

Since the acquisitions are arm's-length transactions, Spada is not required to obtain shareholder approval but subject to regulatory approval.  As Ron Ho and Keith Laskowski are directors of Spada and hold positions with Sandstorm, they have not been involved in the Spada board approval of the Agreement. The Company will seek regulatory approvals and Exchange acceptance of the acquisitions by completing and submitting a filing statement in accordance with applicable Exchange policies.  The filing statement will be made available on the Company's profile page on SEDAR at www.sedar.com.  Other than Exchange acceptance, the most significant condition required to be satisfied in connection with the closing of the acquisitions is completion of the Private Placement.

The closing of the transaction is expected to occur prior to the end of December 2017, following submission of the filing statement and final acceptance from the Exchange of the transaction, or such other date as the parties may agree pursuant to the terms of the agreements.

Trading in the shares of Spada is halted at present.  It is unlikely that the Company's shares will resume trading until the acquisitions are completed.

Completion of the transaction is subject to a number of conditions, including but not limited to, Exchange acceptance. There can be no assurance that the transaction will be completed as proposed or at all.

Investors are cautioned that, except as disclosed in the filing statement to be prepared in connection with the transaction, any information released or received with respect to the transaction may not be accurate or complete and should not be relied upon.  Trading in the securities of Spada should be considered highly speculative.

The Exchange has in no way passed upon the merits of the proposed transaction and has neither approved nor disapproved the contents of this press release.