HONG KONG, Dec. 2, 2019 /CNW/ -- The Society of Publishers in Asia (SOPA), a Hong Kong-based not-for-profit organisation dedicated to pursuing excellence in journalism, today announced that the SOPA 2020 Awards for Editorial Excellence are open for entries. The deadline for submissions is 3pm Hong Kong time on Tuesday, 21 January, 2020.

Since their launch in 1999, the awards have become a world-class benchmark to recognize best practices in journalism in Asia Pacific, while driving journalistic innovation across international, regional and local media platforms. 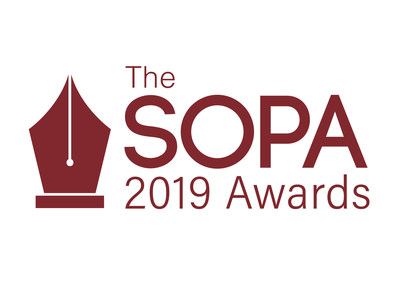 "The SOPA Awards promote and reward the best publishing practices in the region. We aim to continue to inspire journalists to pursue innovation and excellence and to bring significant issues to public notice," said Cliff Buddle, Special Projects Editor at the South China Morning Post and Chair of the SOPA Editorial Committee.

At last year's awards, SOPA received more than 800 entries for the second year running. The finalists and winning entries covered a wide range of crucial issues. Reuters won the top honour – the SOPA Award for Public Service Journalism – for its reporting on the Rohingya crisis.

For the SOPA 2020 Awards, media will compete in 17 categories (full list below). SOPA encourages entries from both large and small publications with entries classified by the breadth of coverage (global or regional/local)  and language (English or Chinese).

The judging panel comprises industry professionals from the region's most influential media organisations, leading journalism schools, and past award winners. The Journalism & Media Studies Centre of the University of Hong Kong has been the Awards Administrator since 2011.

For award purposes, Asia Pacific is defined as Afghanistan and the Central Asia republics, the Indian subcontinent, North and East Asia, Southeast Asia and Australia, New Zealand and the South Pacific Islands.

Submissions, eligibility details and application information can be found at www.sopawards.com. The finalists will be announced in April 2020, with the winners named at the SOPA Awards Gala Dinner on Thursday May 21, 2020 in Hong Kong.

The Google News Initiative, a Platinum Sponsor of the awards, will provide subsidies to first-time/new award entrants on a first-come-first-served basis. In addition, SOPA is providing a 40% discount on membership fees for new applications submitted by Tuesday, 14 January, 2020. Eligibility and benefit details can be found here.

The Society of Publishers in Asia (SOPA) was founded in 1982 to champion freedom of the press, promote excellence in journalism and endorse best practices for all local and regional publishing platforms in the Asia-Pacific region. SOPA is a not-for-profit organisation based in Hong Kong and representing international, regional and local media companies across Asia. The Society of Publishers in Asia is also host to the prestigious annual SOPA Awards for Editorial Excellence, which serve as the world-class benchmark for quality journalism in the region. www.sopasia.com; www.sopawards.com; SOPA LinkedIn.

SOURCE The Society of Publishers in Asia (SOPA)

The Society of Publishers in Asia (SOPA)