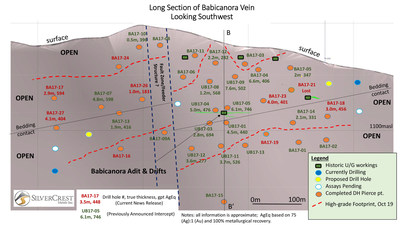 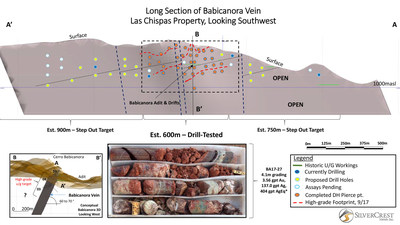 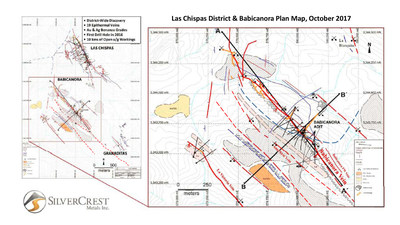 N. Eric Fier, CPG, P.Eng, President and CEO, remarked, "Our continued step-out drilling along the strike of the Babicanora Vein has added another 100 metres to the previously announced high-grade footprint. Our first holes in the Granaditas and Amatista veins, which intersected high-grade mineralization, continue to show further untested potential in the district. Drilling in all nine veins drilled to date has intercepted areas of high-grade mineralization that warrant further drilling to better define continuity and volume. Our Phase II exploration program at Las Chispas continues with six drills actively working from the surface and underground. The objective of this program is to drill-test the Babicanora Vein over 1.5 kilometres of its known 3.2 kilometres strike length. With our continued success, we are aiming to further expand high-grade mineralization along multiple veins in both the Las Chispas and Babicanora areas in preparation for a maiden resource in early 2018."

The most significant result for this release was returned from Hole BA17-27, which intersected 4.1 metres grading 3.56 grams per tonne ("gpt") gold and 137.0 gpt silver or 404 gpt silver equivalent ("AgEq", based on 75 (Ag):1 (Au) and 100% metallurgical recovery). Also noteworthy is 2.9 metres grading 5.62 gpt gold and 172.7 gpt silver, or 594 gpt AgEq in Hole BA17-17. Both are step-out holes which intercepted the Babicanora Vein approximately 100 metres southeast from a previously announced step-out hole, BA17-07 (see attached Figures).The following table summarizes the most significant drill intercepts (uncut, undiluted) for this release within the Babicanora area:

All assays were completed by ALS Chemex in Hermosillo, Mexico, and North Vancouver, BC, Canada.

Drill holes BA17-16, 19, and 24 intercepted anomalous mineralization, but are below the Company's 150 gpt AgEq cutoff. Holes BA17-20 and 22 were drilled into the Amatista Vein adjacent to the Babicanora Vein, and are discussed below with hole BA17-22 pending assays. BA17-21 was a lost downhole but did hit the Babicanora FW Vein near surface as reported above. Hole BA17-25 is an estimated 700 metre step-out to the southeast from hole BA17-17, with assays pending (see attached Figures). All holes that have been drilled, but pending assays, have intercepted quartz veining, stockwork and/or breccia.

The revised high-grade footprint of the Babicanora Vein is now 600 metres long by 150 to 175 metres high, and is open in several directions. The average estimated true thickness and grade (uncut, undiluted) for 20 drill intercepts of this footprint is 3.6 metres grading 2.73 gpt Au and 263.5 gpt Ag or 468 gpt AgEq.

The Company continues to intersect high-grade mineralization in the Babicanora FW Vein as noted in the table above. This vein is parallel and located 20 to 30 metres to the northeast of the Babicanora Vein. The known surface strike length of this vein is over one kilometre long.

The Granaditas Vein (see attached Figures) was intercepted in both GR17-01 and 02 by initial drilling, which also intercepted wide base metal zones (20 to 40 metres) of anomalous grades to up 0.5% Pb and 0.3% Zn. The high-grade intercept in hole GR17-02 also contained 0.5% copper. Geologically, this suggests that the multiple veins currently being drilled in the Babicanora area may contain increased base metal mineralization to depth and along trend to the southeast. Vein strike length is estimated at over 500 metres in length. Follow-up drilling is planned in 2018.

Initial drilling of the Amatista Vein intercepted near-surface high-grade mineralization in the first hole, BA17-20. This vein is near-parallel and located approximately 200 metres to the southeast of the Babicanora Vein. High-grade mineralization was intercepted approximately 40 vertical metres from the surface as reported above. Assays are pending on Hole BA17-22 and will be reported in due course. Vein strike length is estimated at over one kilometre in length. SilverCrest plans on drilling an additional four to six shallow holes on this vein before the end of 2017.

Both the Granaditas and Amatista veins are found within the Babicanora area which is a structural and hydrothermally altered zone over three (3) kilometres long and one (1) kilometre wide which contains multiple low to intermediate sulphidation epithermal veins with true widths of 0.3 to 8 metres wide.

The Company plans to continue with step out drilling on the Babicanora Vein, subsequent drilling on other potential mineralized veins on the Property, and underground rehabilitation at the Las Chispas area. Approximately 5,000 metres of the Phase II drill program is planned for the remaining part of 2017. Besides drilling and underground work, the Company is currently accessing the extension of the Babicanora Adit to improve drill access and expand exploration work, continuing district-wide mapping and sampling, completing initial metallurgical work as well as mechanically trenching historic dumps.

The Qualified Person under National Instrument 43-101 Standards of Disclosure for Mineral Projects for this news release is N. Eric Fier, CPG, P.Eng, and President and CEO for SilverCrest, who has reviewed and approved its contents.

SilverCrest is a Canadian precious metals exploration company headquartered in Vancouver, BC, that is focused on new discoveries, value-added acquisitions and targeting production in Mexico's historic precious metal districts. The Company's current focus is on the high-grade, historic Las Chispas mining district in Sonora, Mexico. SilverCrest is the first company to successfully drill-test the historic Las Chispas Project resulting in numerous discoveries. The Company is led by a proven management team in all aspects of the precious metal mining sector, including taking projects through discovery, finance, on time and on budget construction, and production.

This news release contains "forward-looking statements" within the meaning of Canadian securities legislation. These include, without limitation, statements with respect to: the strategic plans, timing and expectations for the Company's exploration, rehabilitation and drilling programs of the Las Chispas Property, including preparation of an initial resource estimate; information with respect to high grade areas and size of veins projected from underground sampling results and drilling results; and the accessibility of future mining at the Las Chispas Property. Such forward‑looking statements or information are based on a number of assumptions, which may prove to be incorrect. Assumptions have been made regarding, among other things: the conditions in general economic and financial markets; availability of skilled labour; timing and amount of expenditures related to rehabilitation and drilling programs; and effects of regulation by governmental agencies. The actual results could differ materially from those anticipated in these forward-looking statements as a result of risk factors including: the timing and content of work programs; results of exploration activities; the interpretation of drilling results and other geological data; receipt, maintenance and security of permits and mineral property titles; environmental and other regulatory risks; project cost overruns or unanticipated costs and expenses; and general market and industry conditions. Forward-looking statements are based on the expectations and opinions of the Company's management on the date the statements are made. The assumptions used in the preparation of such statements, although considered reasonable at the time of preparation, may prove to be imprecise and, as such, readers are cautioned not to place undue reliance on these forward-looking statements, which speak only as of the date the statements were made. The Company undertakes no obligation to update or revise any forward-looking statements included in this news release if these beliefs, estimates and opinions or other circumstances should change, except as otherwise required by applicable law.