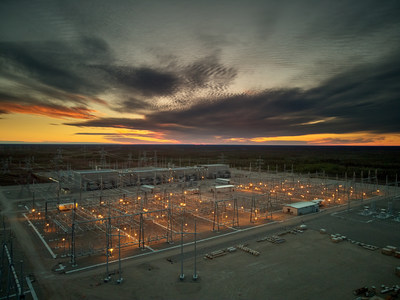 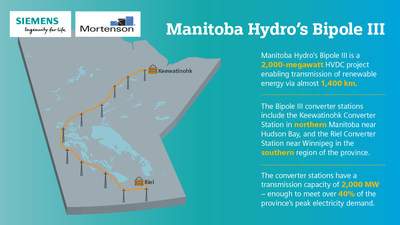 The Bipole III converter stations include the Keewatinohk Converter Station in northern Manitoba near Hudson Bay, and the Riel Converter Station near Winnipeg in the southern region of the province. The converter stations have a transmission capacity of 2,000 megawatts (MW) – enough to meet over 40 percent of the province's peak electricity demand. HVDC transmission is the ideal technology to implement when electricity must be transported over vast distances from remote areas where it is produced to urban and industrial centers where it is needed, as HVDC transmission suffers much lower electricity losses than standard AC transmission.

"Siemens is a global leader in HVDC technology as Mortenson is in construction. With this combination of expertise and a joint effort within our organizations and Manitoba Hydro, we were able to complete this critical and challenging project on time and on budget," said Faisal Kazi, President and CEO, Siemens Canada.

"We tailored the system to the specific requirements of Manitoba Hydro – including designing the solution and equipment for Canadian winter temperatures as low as -50 degrees Celsius." adds Hauke Juergensen, Head of Large Transmission Solutions at Siemens Energy Management.

The Siemens and Mortenson consortium was responsible for the turnkey supply of the HVDC converter equipment and associated facilities, with Siemens delivering the system design and the manufacturing, supply and commissioning of the core HVDC technology while Mortenson provided design support and construction services for the supporting infrastructure, including converter station building, AC filters, and DC switchyards. The remote location of the Keewatinohk Converter Station, and the extreme winter weather conditions present at both sites provided interesting logistics and construction challenges for the team.

"The successful delivery of Bipole III required synergy between our customer Manitoba Hydro and the consortium of Siemens and Mortenson, a mutual respect for each other's expertise and a laser focus on the project goals and deliverables," said Mark Donahue, Vice President and General Manager at Mortenson. "The project management and construction experience we amassed through our years as a General Contractor and an EPC partner were fundamental to the project's success."

Siemens is a global leader in HVDC technology and has commissioned more than 50 HVDC systems worldwide since the 1960s and conducted continuous research into the further development of the technology. In 2010 Siemens implemented the first project in the world using multilevel technology. This extremely network-friendly and compact technology features additional closed-loop and open-loop control functions of the kind familiar from power plants. Siemens recently launched another innovation on the market with the so-called full-bridge technology, which allows operation with overhead power lines as well as underground cable connections and allows to clarify 98 percent of all faults without interrupting operation. In Europe alone, Siemens is currently implementing seven HVDC projects. Another six HVDC links and four offshore grid connections using Siemens direct-current technology are already connected to the grid - combined these projects have a transmission capacity of more than 8,000 MW. That is eight times as much as a reactor block in a nuclear power plant generates on average.

Since 1912 Siemens Canada has stood for engineering excellence, innovation, quality and reliability. Siemens technology in the fields of electrification, automation and digitalization helps make real what matters to Canadians. From the Atlantic to Pacific oceans, Siemens Canada employees deliver solutions for sustainable energy, intelligent infrastructure, healthcare, and the future of manufacturing. One of the world's largest producers of energy-efficient, resource-saving technologies, Siemens is a leading supplier of efficient power generation and power transmission solutions and a pioneer in infrastructure solutions as well as automation, drive and software solutions for industry. The company is also a foremost provider of medical imaging equipment and a leader in laboratory diagnostics and clinical IT. Sales for Siemens Canada in fiscal 2017 (ended September 30), were $2.5 billion CAD. The company has approximately 4,300 employees and 52 locations across Canada. Further information is available at www.siemens.ca.

Mortenson is a U.S.-based, top-20 builder, developer and provider of energy and engineering services committed to helping organizations move their strategies forward. Mortenson's expanding portfolio of integrated services ensures that its customers' investments result in high-performing assets. The result is a turnkey partner, fully invested in the business success of its customers. Founded in 1954, Mortenson has operations across North America with offices in Chicago, Denver, Fargo, Iowa City, Milwaukee, Minneapolis, Phoenix, Portland, San Antonio, Seattle, Washington, D.C., and in Canada. For additional information, visit www.mortenson.com.