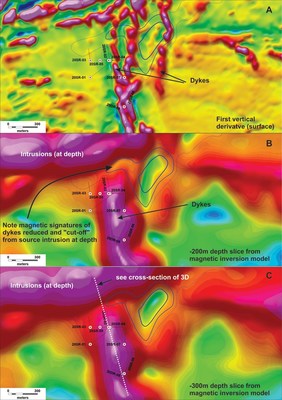 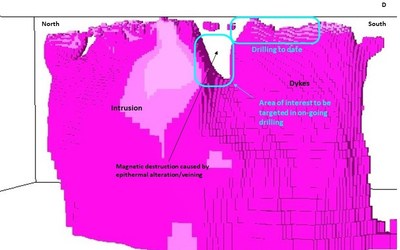 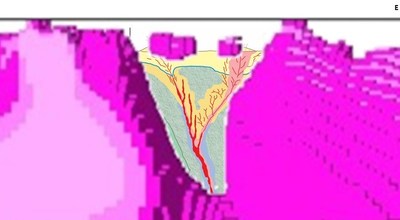 To date, eight drill-holes totalling approximately 2,189 metres of the planned 2,000 to 2,500 metre diamond drilling program have been completed at the Highway Zone. Drilling has focussed on areas of near surface alteration and veining. In light of the global COVID-19 pandemic, management felt that it was prudent to allow contractors to return home to be with their families during the COVID-19 pandemic, while travel conditions still allowed. Further drilling is planned subsequent to the receipt of assays.

"While we are encouraged by the early visual observations of our Phase I drill program at Shot Rock, management is focused on the safety and security of its personnel during this unusual period. This pause will also allow our team to incorporate future assays in our attempt to vector into a potential discovery. Drilling will resume when it has been deemed safe to do so."

Much of the alteration and veining intersected in the first phase of drilling is hosted in a series of gabbro dykes. The epithermal fluids appear to be exploiting the same structural weaknesses as the dykes which are easily fractured and infiltrated by the fluids due to their brittle nature. During the alteration process, magnetite is converted to hematite and other non-magnetic minerals causing the altered dykes to have a markedly lower magnetic signature than their unaltered counterparts. Such magnetite destruction processes are commonly seen in low sulphidation epithermal systems. Drilling will resume when deemed appropriate and will focus in on continuing to follow areas of alteration and veining to depth.

Modelling of the previously completed high-resolution airborne survey data shows progressive magnetite destruction to depths beyond 300 meters, in several areas immediately north and east of drill-holes 20SR-02, 04 and 05 (see press release February 28th). These areas could represent the down-dip continuation of the alteration and stockwork that were intersected in the above-mentioned drill-holes.

Drill-hole 20SR-06 was dominated by two intervals of generally highly potassic altered gabbro dykes (and lesser ultramafic dykes) hosted in propylitic altered siltstones with sections of brecciation and silica altered siltstones . Drill-hole 20SR-07 appears to have undercut the surface mineralization it targeted and the last hole 20SR-08, intersected strongly altered gabbro dykes with local colloform banded veins until the hole was abandoned due to technical difficulties.

Approximately 883 assays are pending from the drill-program.

An update on Root & Cellar will be provided shortly.

The drilling program is contracted to Logan Drilling Group based in Stewiacke, Nova Scotia, and is overseen by Christine Vaillancourt, P. Geo., the Company's Chief Geologist and a Qualified Person under National Instrument 43-101.

Northern Shield Resources Inc. is a Canadian-based company focused on generating high-quality exploration programs with experience in many geological terranes. It is known as a leader in executing grass roots exploration program for Ni-Cu-PGEs and utilizing expertise and innovation toward working on other deposit types. Seabourne Resources Inc. is a wholly-owned subsidiary of Northern Shield focussing on epithermal gold and related deposits in Atlantic Canada and elsewhere.

This news release contains statements concerning the exploration plans, results and potential for epithermal gold deposits, and other mineralization at the Company's Shot Rock property in Nova Scotia, geological, and geometrical analyses of the properties and comparisons of the properties to known epithermal gold deposits and other expectations, plans, goals, objectives, assumptions, information or statements about future, conditions, results of exploration or performance that may constitute forward-looking statements or information under applicable securities legislation.  Such forward-looking statements or information are based on a number of assumptions, which may prove to be incorrect.