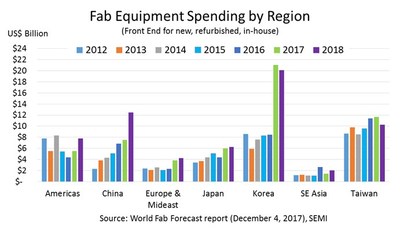 The SEMI World Fab Forecast data shows fab equipment spending in 2017 totaling US$57 billion, an increase of 41 percent year-over-year (YoY). In 2018, spending is expected to increase 11 percent to US$63 billion.

While many companies, including Intel, Micron, Toshiba (and Western Digital), and GLOBALFOUNDRIES increased fab investments for 2017 and 2018, the strong increase reflects spending by just two companies and primarily one region.

SEMI data shows a surge of investments in Korea, due primarily to Samsung, which is expected to increase its fab equipment spending by 128 percent in 2017, from US$8 billion to US$18 billion. SK Hynix also increased fab equipment spending, by about 70 percent, to US$5.5 billion, the largest spending level in its history. While the majority of Samsung and SK Hynix spending remains in Korea, some will take place in China and the United States. Both Samsung and SK Hynix are expected to maintain high levels of investments in 2018. See figure 2.

In 2018, China is expected to begin equipping many fabs constructed in 2017. In the past, non-Chinese companies accounted for most fab investments in China. For the first time, in 2018 Chinese-owned device manufacturers will approach parity, spending nearly as much on fab equipment as their non-Chinese counterparts. In 2018, Chinese-owned companies are expected to invest about US$5.8 billion, while non-Chinese will invest US$6.7 billion. Many new companies such as Yangtze Memory Technology, Fujian Jin Hua, Hua Li, and Hefei Chang Xin Memory are investing heavily in the region.

Learn more about the SEMI fab databases at: www.semi.org/en/MarketInfo/FabDatabase and www.youtube.com/user/SEMImktstats.