VANCOUVER, BC, Dec. 3, 2020 /CNW/ - Sable Resources Ltd. ("Sable" or the "Company") (TSXV: SAE) (OTCQB: SBLRF) is pleased to provide an exploration update and to announce that the Company has received all necessary permitting required to drill at its high-grade polymetallic El Fierro Project in San Juan, Argentina. 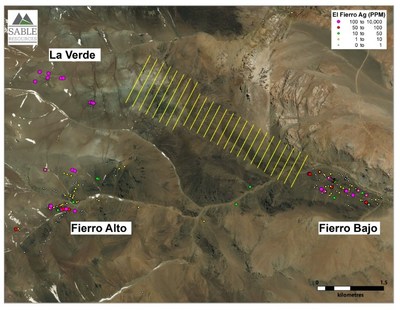 Following the completion of ongoing detailed mapping, soil sampling and geophysical programs, Sable plans to drill 10,000m at El Fierro in two 5,000m stages beginning in February 2021. Four geologists are actively mapping different areas between Fierro Bajo and Fierro Alto and completing a soil sampling grid of 400 samples located northwest of Fierro Bajo exploring for the strike continuity of the known mineralized structures. Sable has already completed the construction of camp facilities to house 15 people for the upcoming drill program.

Parallel with the mapping and soil sampling programs, Quantec Geophysics has been engaged to conduct a 264 km Ground Magnetics survey covering the three main mineralized areas - Fierro Bajo, Fierro Alto, and La Verde. The program, currently 40% complete, has been designed to highlight strike extensions of known veins and aid in the discovery of additional non-outcropping veins targets. Following the completion of magnetic survey, an Induced Polarisation (IP) survey will be conducted at Fierro Bajo and Fierro Alto to model the vertical extent of the veins for drill targeting. Drilling at Fierro Bajo is scheduled to begin during the first week of February 2021.

Ruben Padilla, President and CEO of Sable commented, "With the receipt of the necessary permits we now have a clear pathway to our maiden drill program at El Fierro.  The completion of the ongoing mapping, geochemistry and geophysical programs will give us the necessary tools to accurately target the veins in time for the initiation of drilling in February."

ABOUT THE EL FIERRO PROJECT

The El Fierro Project is located 250 km northwest of San Juan, Argentina and 120 km north of Sable's Don Julio Project in one of the best-known historical mining districts in the San Juan province.  The El Fierro Project consists of three main known mineralized areas - Fierro Alto, Fierro Bajo, and La Verde over an area of 8 km by 4 km.  The three areas host a number of old artisanal mining workings where silver, lead and zinc were intermittently mined since the late 1800's until the 1960s decade; the property has never been drilled.  Sable currently controls 46,391 hectares covering all the historically mineralized areas and additional highly prospective ground over a large magnetic anomaly.

Luis Arteaga M.Sc. P.Geo., Vice President Exploration is the Company's Qualified Person as defined by NI 43-101. He has reviewed and approved the technical information in this news release.

Certain statements contained in this press release constitute forward-looking information. These statements relate to future events or future performance. The use of any of the words "could", "intend", "expect", "believe", "will", "projected", "estimated" and similar expressions and statements relating to matters that are not historical facts are intended to identify forward-looking information and are based on Sable's current belief or assumptions as to the outcome and timing of such future events. Actual future results may differ materially. Although such statements are based on reasonable assumptions of Sable's management, there can be no assurance that any conclusions or forecasts will prove to be accurate.

While Sable considers these assumptions to be reasonable based on information currently available, they may prove to be incorrect. Forward looking information involves known and unknown risks, uncertainties and other factors which may cause the actual results, performance or achievements to be materially different from any future results, performance or achievements expressed or implied by the forward-looking information. Such factors include risks inherent in the exploration and development of mineral deposits, including risks relating to changes in project parameters as plans continue to be redefined, risks relating to variations in grade or recovery rates, risks relating to changes in mineral prices and the worldwide demand for and supply of minerals, risks related to increased competition and current global financial conditions and the COVID-19 pandemic, access and supply risks, reliance on key personnel, operational risks, and regulatory risks, including risks relating to the acquisition of the necessary licenses and permits, financing, capitalization and liquidity risks.