TORONTO, Aug. 7, 2018 /CNW/ - Sable Resources (TSX.V: SAE) (the "Company" or "Sable") is pleased to announce results from the third drill hole targeting the Margarita Vein in its ongoing 12-hole drill program at the Margarita Project, Chihuahua State, Mexico. Hole M-DDH-18-06 is located between previously released holes M-DDH-18-04 and M-DDH-18-05 (Sable Press Release dated July 26 2018) and confirms vein continuity between these two holes over a distance of 500m. M-DDH-18-06 intersected the Margarita Vein at a depth of 40 meters from surface and returned a weighted average grade of 514g/t AgEq over an intercept of 12.4 meters. True widths are estimated to be 90% of the intercept based on vein to core angle. Detailed drill results, location plan, sections and core photos are available from the Sable website. 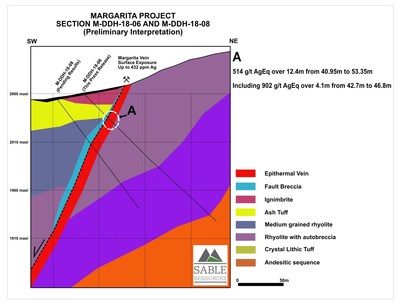 Holes M-DDH-07, 08, 09, 10 and 11 have been completed and are awaiting results. Similar vein textures have been intersected in these holes across similar widths down to a depth of 100m from surface. M-DDH-12 is currently underway.

"We are greatly encouraged by the robust width and grade intersected in hole 6, confirming the Margarita vein continuity for 500m", commented Ruben Padilla, VP Exploration of Sable Resources. "Results for pending holes which test the Margarita structure further at depth and along strike are expected shortly."

About Sable Resources Ltd.Sable owns numerous mineral projects in British Columbia, Canada, Mexico, and Argentina including 142 square kilometers of mineral tenure and mining leases in the Toodoggone mining district of north-central British Columbia which hosts the past-producing Baker and Shasta mines, and the 250-ton-per-day Baker mill and tailings facility. In addition to that, Sable's activity in Argentina includes developing the Don Julio high sulphidation epithermal project in the San Juan Province.

Sample preparation was carried out by ALS Chemex de Mexico S.A. de C.V., a subsidiary of ALS Minerals, at their laboratory at Chihuahua, State of Chihuahua, Mexico. Analyses were carried out at their laboratory in North Vancouver, British Columbia, Canada. Sample preparation was by drying in an oven at a maximum temperature of 60°C, fine crushing of the sample to at least 70% passing less than 2 mm, sample splitting using a riffle splitter, and pulverizing a 250 g split to at least 85% passing 75 microns (code PREP-31).

Luis Arteaga (M.Sc) P. Geo. Exploration Manager for Sable Resources and the Company's Qualified Person as defined by NI 43-101 has reviewed and approved the technical information in this news release.

* Weighted average composites. All other intervals are actual results.